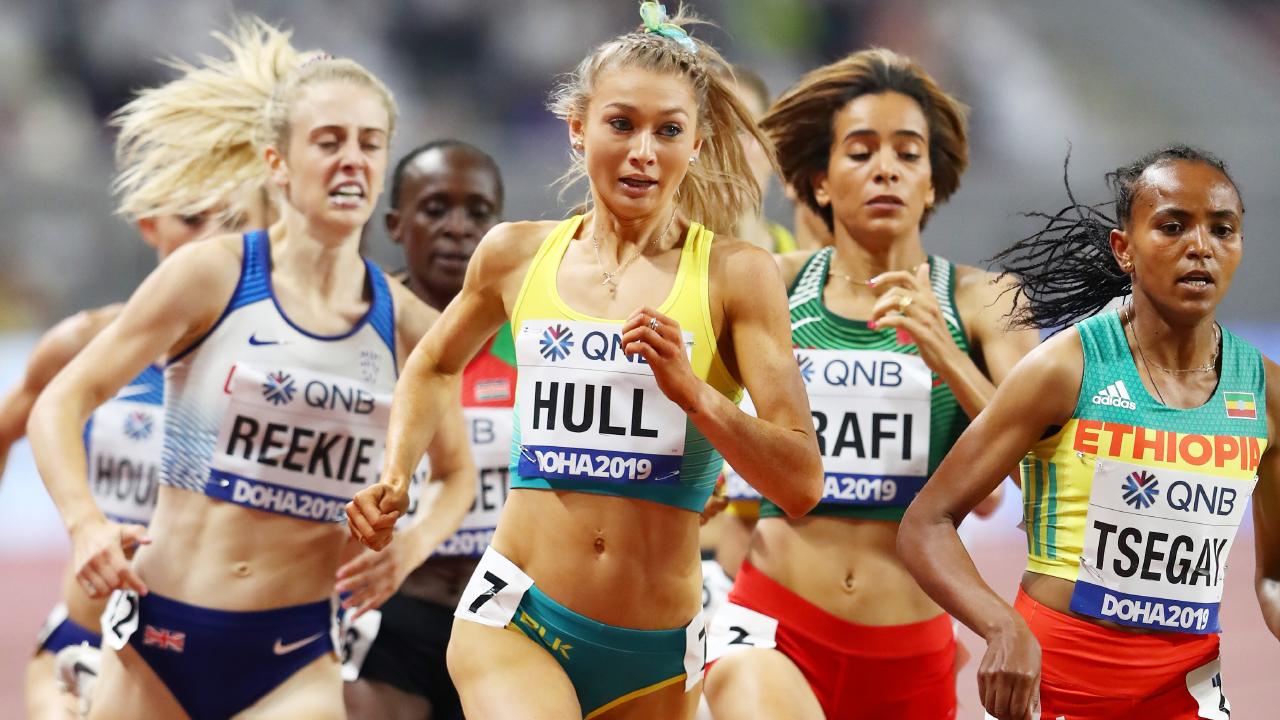 It started on August 14, 2020 where Hull, the former Oregon Duck, broke Benita Willis’s 18-year-old Australian 5000m record clocking 14:43.80, at the Monaco Diamond League. No one was shocked by the run, but still, Benita’s record was far from weak, standing for 18 years and surviving assaults by the likes of Eloise Wellings, Sarah Jamieson, Madeline Hills and Genevieve Gregson.

But Hull wasn’t done. In what is perhaps her pet event, the 1500m, most were assuming it was just a matter of time before Linden Hall’s mark, set in 2018, would also fall. In Berlin, conditions were ideal for Hull.  A pacemaker was arranged for Scottish star Laura Muir, the rabbit went out on sub-4 1500m pace. Hull sat in behind second place finisher Laura Weightman for the majority of the race. The Steve Cram coached English athlete was just a little too strong for Hull, but it gave her the perfect rabbit, as they raced just milliseconds apart over the final 200m.

Hull’s next goal; a sub-4minute 1500m. Speaking post meet Hull had the following to say

“I tried not to clock-watch but I was very alert in the last 500m so I thought I was going to skip under the record but then it is like you are holding that hope you would run 3.59.99.”

Speaking about running sub-4 Hull said: “fire in our belly to go under four. I know next year it will be fire in the belly to try for it next year.”

Hull has already qualified for the Tokyo Olympics after taking out the Australian 5000m title in February, just before Covid-19 upended the 2020 Athletics season.

While Hull may view herself as a 1500m runner at heart, she will be required to choose between the two distances for the Tokyo 2021 Games.

WOW 🤩 Australian National 1500m record 🇦🇺4:00.42 at @istaf_berlin 😃 I took a chance, went all in and @pete.j.julian was confident if I raced aggressively, I could catch something special. Today that was lucky to be a PB and the Aussie record! As you can see @lauraweightman1 and I gracefully gave every inch we could in hopes of cracking the 4:00 barrier, but it’s fire in the belly for another day! 💪🏼 Here’s a couple of fun stats for you: 1. @ryangregson25 and I both got started with Albion Park Little Athletics Club back in the day and now hold the men’s and women’s 🇦🇺 outdoor national 1500m records. Pretty cool feat for a small south coast of NSW grassroots club! 2. At 23, I’m the first Aussie woman to hold both the 1500m and 5,000m national records in 23 years. Thank you @david_tarbotton for the Tarby Stat here! A huge congrats to our speedy team mama @shannonrowbury on a season’s best today and @lmuiruns for another classy run and win to add to her incredible 2020 campaign!👏🏼👏🏼👏🏼 📸: @jrhodesathletics #istaf2020 #itsfinetoredline #allin #momentstomomentum #makeithurt #makeitcount #livingthedream