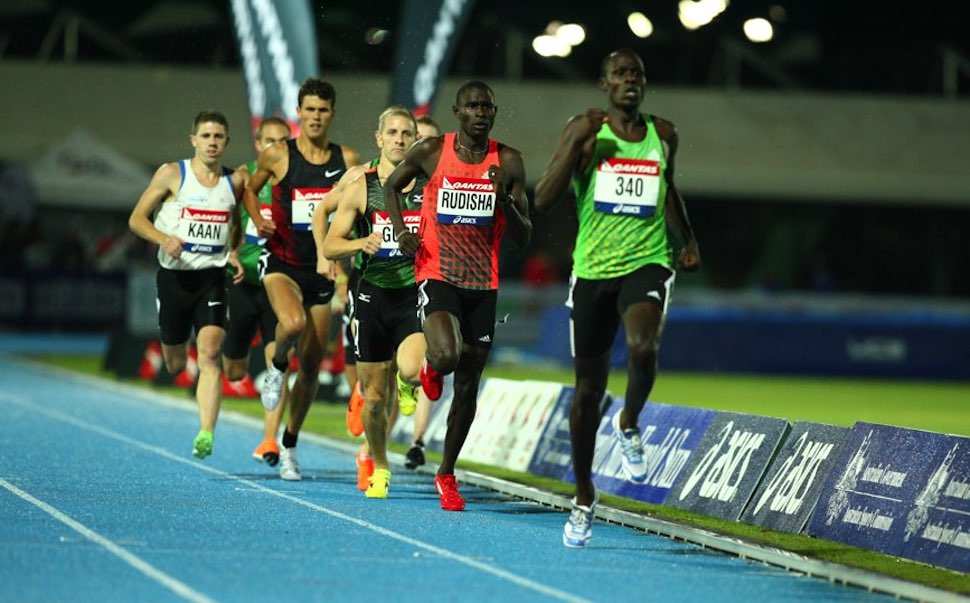 The simple solution is for kids to do a variety of sports and to not train too intensely when they are young. Tim Noakes, M.D., states, “If a kid plays a variety of running sports (soccer, basketball, lacrosse, etc.) from ages 6–12 and does some 20-to 30-minute runs during that time, then he or she is preparing the bones, ligaments, tendons and muscles for more regular training.”

England’s Athletics 365 seems a better alternative to Little Athletics. It looks like fun, develops athleticism and is a building block for future success. But, Little Aths is here to stay and can be very enjoyable, but there must be training guidelines set in place. Refer to the training plan below as to how junior middle distance runners should train. Ideally, athletics for primary aged kids would be a term’s Phys. Ed. classes at school, culminating in a twilight sports carnival. But it is taken much more seriously that that. We have national titles at Primary School level. This is on top of all the championship racing in Little Athletics.

If juniors are racing, the following training guide (or similar) should be followed during the track season. I’ve included winter totals too (my estimates). There’s not much new under the sun. I’ve taken this training outline from the Australian Track and Field Coaches Association – Coaching Manual 1999 (with minor modifications / additions e.g. the weekly distance, explanations). I unaware of the identity of the author. 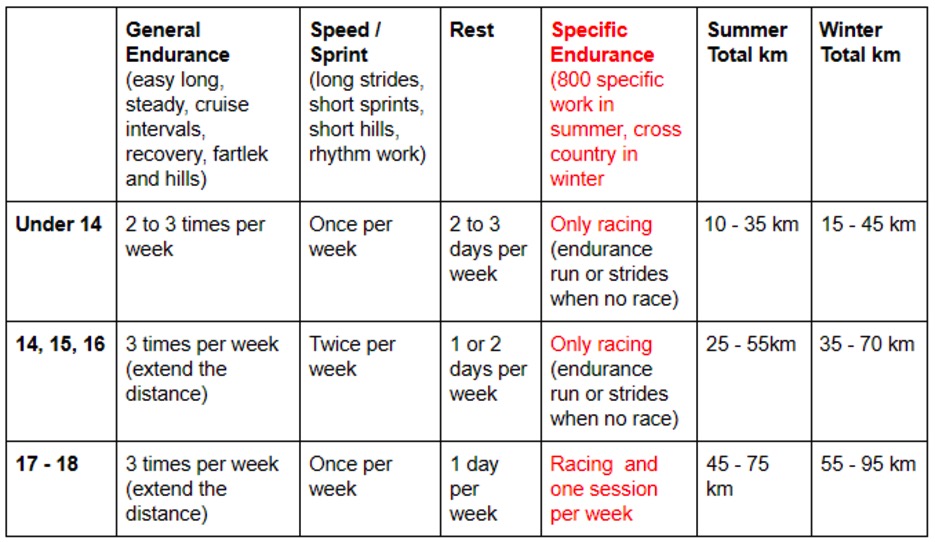 2 or 3 morning runs could be introduced in the final phase.

Once again the solution is simple to say, difficult to implement. Follow the training guideline above. Run Cross Country. Limit hard, intense training. Why is it hard to implement? Schools want top results. They give sports scholarships. They want a return for their investment. Some parents are pushy. There is always the temptation to train for best results now and compromise future development. How do we limit an eight month track season? Should Athletics school carnivals be held in late Term 1 or early Term 2 (April)? By doing so, combining school and club seasons.

A four to five month season would be plenty. If there is no change to the season, it may be best to choose between school or club, or just train through much of a season, or play a different sport for a time.

“When track season is over, they should participate in soccer, basketball, and other youth sports they enjoy. We recommend multisport participation because it’s important to develop all-around physical fitness before beginning specialised training for track and cross country.”

Nobody recommends building a foundation on years of 300m repetitions. Peter Coe warned, that the application of interval training has to be done “very carefully”, and that interval training should not be used by the “very young”. Peter Coe stresses the value of cross country for Sebastian from ages 12 to 18, and encourages parents not to push their children too hard (Running for Fitness, by Sebastian and Peter Coe).

From Peter Snell: “Long, moderate-pace running is anabolic whereas high-intensity demanding training, while having its place, is catabolic.”

So what is Hart’s secret? It’s two simple percentages that lead up to world-record performances.

Hart said he trains his sprinters like milers and half-milers. When track aficionados and know-it-alls believed that a 400-meter runner needed 90 percent anaerobic speed and only 10 percent aerobic strength, Hart was training his athletes at a 60/40 anaerobic to aerobic.

“If you go out and do a lot of anaerobic running, you might as well be racing.”

In 1976, at season’s start, Sebastian Coe, at 19, had run only ten 800m races in his life, and that includes a heat and a training run. An Australian at the same age could easily have run well over one hundred 800m races.

From Arthur Lydiard: “I always remember the words of Gundar Haegg’s coach, ‘If you can get a boy in his teens and encourage him to train and not race until he is matured, then you have laid the foundations of an Olympic champion.’ I believe that sums the whole thing up.”

From Steve Cram: “Despite what some coaches might say, the majority of past successes were built on a sound endurance background forged by most on the mud and hills of strength-building cross-country events. Bypass this as an integral part of a competitive foundation and you automatically reduce the chances of sustained success on the track from 800m up to the marathon.”

From Seb Coe: “I am convinced that unless the right endurance grounding is in place by the time the aspiring middle-distance or distance runner graduates from junior to senior ranks – and that certainly includes cross-country running – the athlete will always be at a disadvantage, particularly when lining up against Africa’s best.”

“I used to run 30-40 cross country races a year – very often one on Wednesday and another at the weekend.

“I had a massive physical advantage over other athletes who didn’t do cross country.”

“If you run cross country as a 16-17-year-old, there’s nothing much that will spook you physically on the track.”

“I believe with the problems we’ve had in European distance running that it’s not remotely coincidental that we’ve lost a generation of coaches who do not believe cross country is important.”

Something to think about… after David Rudisha’s win in the 2012 Olympic Games a reporter travelled to Kenya for an interview with David. During commentary, she noted that there was no athletics track in David’s hometown when he was growing up, and marvelled at just how good David could be if there had been.

Another simple solution here. The open age 800m athlete needs to develop their aerobic base and cover 110 to 150 kms (depending upon the athlete) in the winter. It may take time to build up to this.

Even during the track season, Seb Coe kept up long runs. “I basically run twice a week purely for aerobic conditioning, perhaps one and a half hours each. The rest of the week is steady running to warm up and warm down or at the end of the day to clear lactates and acids that build up from hard track running.”

Here are two accounts demonstrating the results of Coe’s years of endurance training at a time when he was considered an 800m runner only.

In November 1977, Coe comfortably defeated Thomas Wessinghage (then ranked 2 in the world for 1500m) in a 2.4 km cross country race (relay?). Two months earlier Wessinghage had beaten Ovett over 2000m on the track.

In October 1978, two weeks after his end of season 800m PB and UK Record of 1.43.97, Coe beat Eamon Coghlan and Mike McLeod in a 4 Mile Road Race. Both McLeod and Coghlan would eventually win medals at World Championship level in distance events. Coe’s endurance was extraordinary. This victory was at the end of the track season and after peaking for 800m finals.

I have to include the following;

From Seb Coe: “I made my way up through schools and youth athletics to the point where I was selected for elite training at Lilleshall. There were dozens of us. Three from every discipline. Right at the start the head coach called us together and asked us how many of us we thought would still be around when it came to senior team selection.

‘There was plenty of ability in that group but to get to the top takes more than that. It takes the thousands of hours you put in, the stuff nobody sees. It takes training twice a day when you are 15, three times a day once you are 18, running 80 miles a week.

‘It takes getting up at 6.45 on a cold December morning, going straight through the warmth of the kitchen onto a moorland road. It takes the strength of will not to turn back for breakfast after half an hour in the freezing rain but to keep going for three hours beyond that.

‘It takes dedication and commitment which nobody thinks about when they see you trot into a great stadium. I won’t say it takes great sacrifices because I get as much pleasure from running as from anything in my life. Sacrifice is going to war for your country. Sacrifice is a brave young man being blown up by a landmine in Afghanistan.

‘But it does take being able to live with yourself. They made a film of Alan Sillitoe’s story about the loneliness of the long-distance runner. It’s the same for middle distance. You spend countless hours on your own.”

From Renato Canova: “and in any case NOBODY runs 800m fast with less than 70 miles per week “

If you want to be a chance of reaching your potential at 800m, as an open age athlete, average seventy miles per week, predominantly steady running, during base training. If you can run 45.5 seconds flat for 400m you may get away with 60 miles per week.

Part 4. Cracking the Coed – Seb Coe as a Junior

An Analysis of Seb Coe’s Junior Performances and Race Selection

Seb Coe, like Peter Snell, ran the 800m seriously for the first time at age 19.