Home Features Alcohol and the athlete 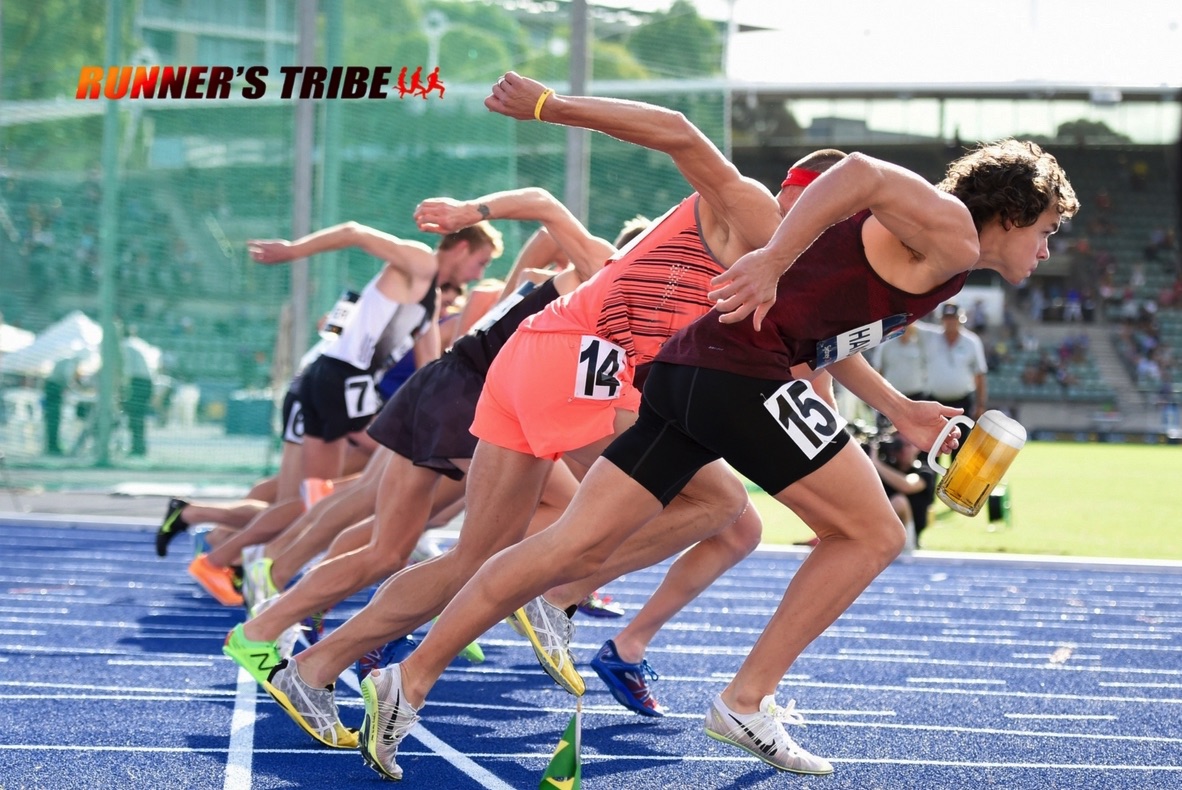 Alcohol and the athlete: A Column By Daniel Wallis for Runner’s Tribe

“I just want to drink beer and train like an animal”

There are substantial distinctions between the varying degrees of alcohol consumption, yet a reductionist method is consistently used to describe all use, particularly for athletes. This has been the case since 1948, when a medical investigation into cardiac disease found that alcohol could be beneficial, and whose physicians were prevented from publishing their findings. [i] Many still want to view alcohol with a pre-1948 lens, yet a strong case can now be made that the use of alcohol in athletics is disproportionate to its influence.

The above is highly prevalent in the U.S. collegiate system. In many colleges across America, student-athletes are required to sign clauses that require them to potentially forfeit their eligibility and scholarships if found to be using alcohol during the season. This illustrates the fundamental misunderstanding of a complex issue. For example, a can of just about any beer has more nutritional value than a can of soda, which has zero. In this scenario an athlete would be required to choose the soda if ever presented with such a situation over dinner; perhaps somewhere with awful water… let’s say Los Angeles.

It’s widely recognised that ‘binge-drinking’ is prevalent amongst student-athletes, yet it is still below the campus average and falling. [ii]Moreover, imposing a policy of abstinence does not educate young athletes, nor does it address the science behind addiction. [iii]

An incredibly brief history of time

The evidence for the consumption of alcohol dates back over 10,000 years – a period that 40% of Americans believe to pre-date the beginning of time. [iv]There is also evidence to suggest that early humans grew and stored grain for beer before it was ever used for bread, with the fermentation of the grain and the grape being linked to the development of early civilisation. [v]

Acute alcohol consumption has a deleterious effect on a myriad of systems within the body. Severe intoxication has been shown to inhibit the availability of glucose necessary to fuel protein synthesis during muscle recovery. [vi]Alcohol is also a well-known diuretic, which of course leads to dehydration; one of the most consistent impacts across consumption of any amount… more on this later.

However, as with just about any aspect of training, timing and volume is critical. The benefits of resistance training, for example, are well documented – yet the analysis is rarely framed either immediately preceding or following a workout or competition, which is precisely how several studies on alcohol and athletic performance are considered.

Professor Matthew Barnes of Massey University School of Sport and Medicine has stated that he has “Never really seen anything that says [alcohol] is useful for recovery”, and that athletes should opt for water or a sports drink right after a competition. He further exclaims that athletes can consume alcohol, but only “if they must” and after appropriate refuelling, while stating, “Other than the social side of it, I can’t see the benefit to alcohol at all”. [vii]

The assumption that Barnes appears to be operating on is that high-level athletes would consider a Rolling Rock over a recovery drink following a workout, while completely disregarding the positive role alcohol can play in social situations.

The methodology applied to alcohol is rarely used for other potentially toxic substances, with many of the studies on alcohol prefaced with acute use. A college coach would rarely pull an athlete aside for accepting refills of soda with their meal mid-season or the night before a race, or for ordering unlimited fries or deep-fried cheese – all of which can severely affect the endocrine system. [viii] Yet a glass of Central Otago Pinot Noir full of beneficial resveratrol with dinner is strictly forbidden, despite the well known fact that alcohol makes other people less tedious, and food less bland.

This defective pattern of reasoning is also used by athletes to rationalise a poor performance. Alcohol will often be the prime suspect; not diet, stress, or travel. A certain amount of alcohol may compound these factors, but it doesn’t supersede them. More often than not, the perceived influence is likely to be a greatly distorted view of the actual impact.

No two athletes are the same, yet evidence suggests that a threshold exists at which alcohol becomes detrimental to performance. [ix] Let’s assume that it’s a Sunday night, earlier that day was a big morning of training. You’ve since refuelled, rested, and are posted up ready to burn some brain cells courtesy of Netflix. At this point, a dose of alcohol quiets the brain and reduces the stress response. Stress is bad, so interrupting this pathway is beneficial. However, once blood alcohol levels get to around 0.1% everything starts to change; the brain triggers the release of a cascade of stress hormones, as it is convinced at this point that its in mortal danger. [x]

Would sparkling water be a better option in the above situation? Perhaps, but athletes do not exist in a vacuum, unless of course you’re a Chinese gymnast. The point is, even if someone has an occasional blowout, it makes them no less of an athlete as a bad workout does. A night of intoxication can still yield a net-positive impact across an athlete’s season, just as a bad night’s sleep, or illness still can. We’re biologically adapted to moderate alcohol; it’s part of how we became modern humans. [xi] The net-positive relationship is one that world-famous alcoholic Winston Churchill recognised, “I have taken more out of alcohol than it has taken out of me”, he said.

Another part of what makes us human is differences in how we are wired that are often responsible for ‘binge’ drinking, [xii] a term that encompasses isolated and excessive drinking patterns and is distinct from occasional light or social drinking. Binge drinking is common in a group setting and has been shown to lead to a greater euphoria than drinking the same amount alone, which facilitates more consumption [xiii] and is not uncommon to athletes.

Binge drinking is not beneficial for performance of any kind, with the exception being that on the dance floor. However, it can be a social response to the forbidden nature of alcohol, and the widespread misunderstanding about its use outside of alcoholism. The status quo response is avoidance and abstinence over education; the world’s oldest form of regulation.

Individuals differ in their capacity to exercise judgement and inhibit impulses. In some, an addictive substance such as sugar, which is one of the most addictive substances currently known and has more power to monopolize the reward circuit if the prefrontal cortex is not functioning properly. [xiv] Moreover, antisocial personalities often have deficiencies in prefrontal functioning, with running likely ranking joint first with stamp collecting for percentage of antisocial personalities.

Binge drinking will undoubtedly affect performance in certain ways, but abstinence is not the answer, or any answer for that matter. Research has shown that abstaining from alcohol can increase the risk of dying. Even heavy drinkers are likely to live longer than abstainers. Moderate drinkers have more friends, a higher quality of ‘friend support’ and are also more likely to be married than abstainers; who attempt to forget the brain’s reward pathways rather than rewire them. [xv] Running is hard enough as it is, so doing it with no mates is only going to make it harder.

As the ever-rational Benjamin Franklin said, “Beer is living proof that God loves us and wants us to be happy.” For every story about an athlete blaming a bad performance on alcohol, you’ll find a more interesting one from someone that indulged in a few the night before an outstanding performance.

The best of course are from Down Under, such as Dick Tayler enjoying two pints with Arthur Lydiard the night before his dramatic win in the 1974 Commonwealth Games 10,000m. The most well known American story doesn’t make quite the same impact, given it involved Steve Prefontaine trapped under his flipped car with a 0.16 BAV.

As marathon legend and exercise physiologist Pete Pfitzinger writes, “Avoiding alcohol is neither realistic nor helpful advice. The real issue is determining how much alcohol you can drink before it has an effect on your running performance.” [i]

Alcohol, substances high in protein, caffeine, sugar, salt and even many vegetables are diuretics. Pfitzinger’s rule of thumb is to drink an extra ounce (30mL) of water for each ounce of beer, and 3 ounces (90mL) of water for each ounce of wine consumed. “With this in mind, its best to limit yourself to one or, at the most two beers or one glass of wine the night before a race.” [ii]

Science has since given us an even more effective method that will serve the body well whether or not you’ve had a drink: a glass of water and an electrolyte drink such as SOS Rehydrate, a favourite of many runners. Every night the body loses about half a litre of water through exhalation. [iv] Given that SOS is as effective as an intravenous drip for dehydration, you’ll have a head start for the morning’s glory by absorbing three times more water than water alone, as well as the correct balance of electrolytes. This isn’t to say you should drink any more than Pfitzinger’s recommendations, it’s just going to do a better job of rehydrating the body.

Be smart, but don’t be afraid to rip the head off of a cold one now and then.

Painfully obvious disclaimer: The Runner’s Tribe & SOS Rehydrate does not endorse under-age or irresponsible drinking. Also, if you are going to drink… make it something good. Cheap booze is a false economy. [v] [i] Pfitzinger, Pete, and Scott Douglas. Advanced Marathoning. Champaign, IL: Human Kinetics, 2009. Print.