In November last year, the 165km Grampians Peaks Trail quietly opened its doors to the public. Although the name may already be familiar to a few Melbournians, particularly amongst the rock-climbing community, the Grampians otherwise tends to slip under the radar as a place for some truly brilliant trail running.

The Grampians Peaks Trail (‘GPT’) is 165km long, with over 8000m of ascent and descent. It is a world-class and challenging hike, with rough rocky terrain underfoot and a baking hot sun that dries you out in minutes. As part of the official GPT experience, Parks Victoria have set up some spectacular trail infrastructure along the route including tent pads, glass-windowed shelters, solar USB charging stations, rain-water tanks and compostable toilets. They also recommend walking the route in 13 days, but as a cocky trail runner, I decided I could do it in 3.

I’d originally planned to run the trail in one of my hardier trail shoes, but on the eve of the run I kicked my big toe in the shower and split the nail. You can imagine the scenes – blood everywhere, me desperately trying to ice my swollen toe, cursing my bad luck. Realising that a change of plans was needed, I took out my Tarkine Goshawks – a pair of all-terrain trainers with a huge splayed Altra-style toe box. I wasn’t sure how well they’d grip / hold up on the rocky terrain of the GPT, but figured it had to be better than bashing what felt like a broken toe for every step of a 165km epic.

On the morning of 16 January, I gathered my fast-packing gear and set off from the base of Mount Zero at the northern tip of the GPT. What followed was 4 days of epic fast-packing through the mountains, with bone dry 35-degree days followed by gorgeous sunsets. I saw not a soul until I passed the only town at Halls Gap, and for nearly all of it I was left alone with the sounds of chirping birds and startled wallabies jumping through the scrub. I reckon I drank over 10L per day easily, and by the end of each day my feet were beaten up and exhausted from 10-12 hours on the hard rocky terrain. Whilst navigation wasn’t challenging, some sections involved following indistinct markers over long rocky slabs, and it made for quite an adventure! 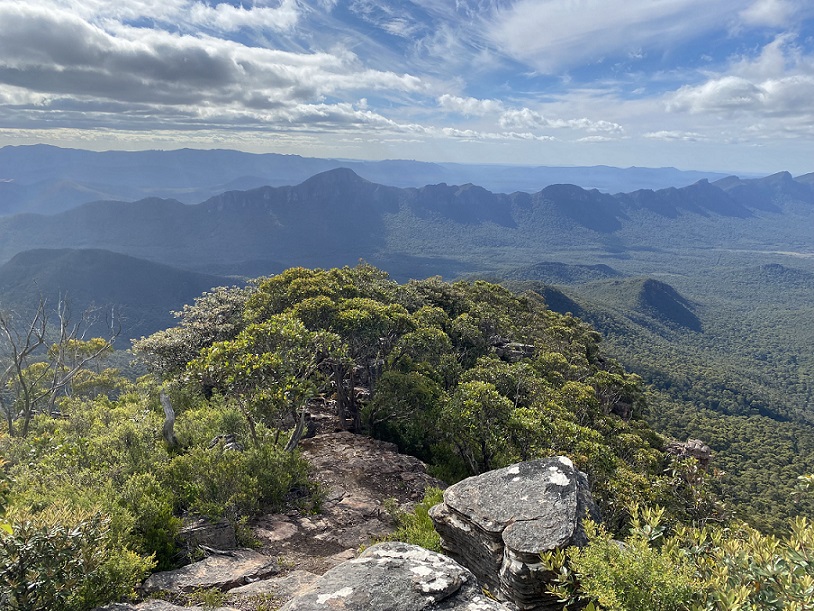 It was a dishevelled, tired and 6-kg-lighter version of myself that jogged into the final town of Dunkeld on the evening of the 4th day. I had quickly re-estimated the ‘3 days’ I thought it was going to take me on the trail, as the GPT was far more technical and steep than I had imagined (hint: the photos of a nice easy trail on the Parks Victoria website are misleading!).

By the end of it all, I was almost afraid to look at my Goshawks – certain I had just torn my new pair of shoes to shreds on that sharp rocky trail. They had been so comfy for my toes (especially the sore one), and far tackier than I expected on the technical descents, so I figured if they were destroyed then at least they’d served me well. However, when I finally summoned the courage to properly check them, I discovered the outsole and future foam midsole barely had a scratch. Talk about durability!

A successful traverse of the GPT, a stunning new landscape, a likely FKT (although who’s counting), and all my gear held up superbly. Now that calls for a beer!

For anyone looking to hike the GPT in the future, you can book it with Parks Victoria. Alternatively, if you want to run/fast-pack it in less than the scheduled 13 days you can reach out to me directly for some logistics/planning tips on Instagram @ ut_mbg. Either way, the GPT is a once in a lifetime adventure!