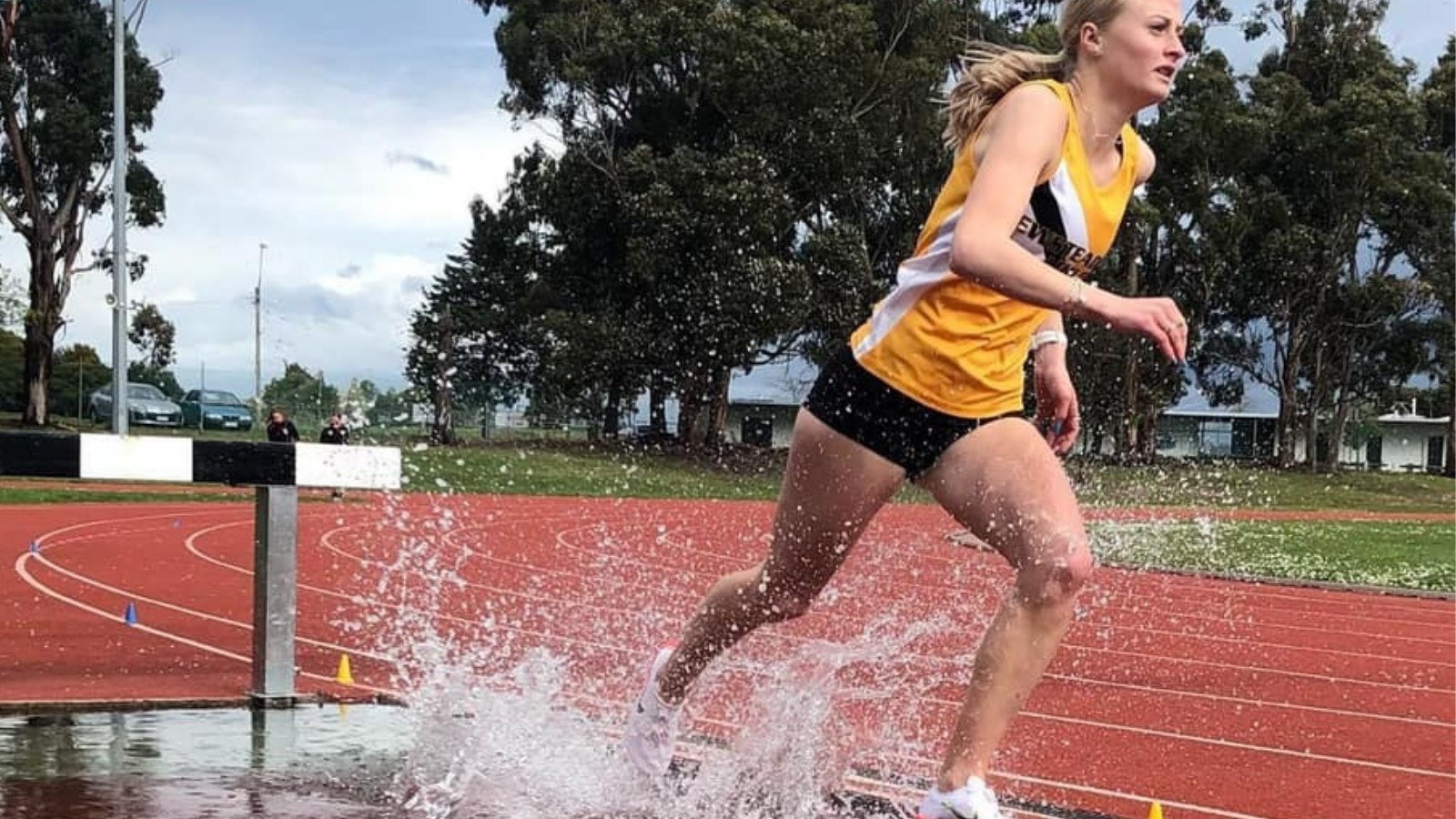 Hi everyone, my name is Abbie Butler I’m 17 years old, and a steeplechaser/ middle distance runner from Launceston Tasmania. It’s a privilege to be asked to share my story on Runner’s tribe. I’m hoping my story and training tips can inspire a number of people to improve and enjoy their running.

Ever since I was a very little girl all I had known was to run and be fit, healthy and active. That is what my parents are, My Mum Emma and my Dad Marcus were competitive road runners when I was growing up and still run, So being in that environment it was only a matter of time before I fell in love with it too. I won my first 2km road race at the age of 4 crossing the line holding hands with my brothers (we are triplets by the way), At the age of 8 I started little athletics with my two brothers. I loved the longer distances and the sprint hurdles. All through little athletics the 1500m and the 90m sprint hurdles were my favourite. I first represented Tasmania at the age of 10 at the Australian All Schools in 2014. From then I was selected in many State cross country teams. I never really placed that well 13th was my best but that made me want to run more and to get better.

At the age of 13, I started to take my running more seriously and began to train regularly with my parents coaching me. In the 2018/ 2019 track season, my dad said that I should try the Steeplechase as I was a confident jumper and really good over the longer distances.

I stood on the start line next to my brother not knowing what to expect, after the first lap I knew this was going to be my event. In that race, I broke the Northern centre record by 7 seconds. Later that season I competed in my first Steeplechase at Nationals, placing second in the U/16 girls and running a 12 second PB. Then in October of 2019 at State All Schools I broke 5 State records in the U16 to U20 age divisions in the Steeplechase running a 15 second PB in a 6:47. That time was the fastest in Australia for a U18 and put me on the world U18 ranking list in 16th that year and I was only 15 years old.

In December of 2019 I won the Australian all schools in the U16 2000m Steeplechase in a 6:48. I had a great season from December to March getting ready for Nationals again and hoping to run faster but then Covid hit Australia and Nationals were cancelled along with many other races which made training and racing extremely hard for the rest of 2020. The next big race I had was Australian National champs in April 2021, I had a really rough season and was not race fit and lacked a lot of confidence that I would normally have, but I went into the race knowing what I was capable of and knowing I had won Nationals before. I ended up winning the race by 4 seconds with a 200m sprint finish, the race wasn’t pretty and was one of the hardest races I have ever run but I felt as though I had to prove to myself and to others what hard work and determination looks like.

Since then I’ve been consistently training with Mum and Dad as my coaches still, and I have big plans for the season of 2022. I want to make it to World Juniors in the 3000m Steeplechase and to keep improving my times. Other than running  I’m about to study Certificate 3 in Beauty Therapy which I’m really excited about, I also work in a Childcare Centre and absolutely love it. I also spend a lot of time on my grandparents’ farm of a weekend with my brothers.

A typical week for me consists of 2 harder sessions 3 longer slow runs and 2 strength/ weight sessions. My 4 absolute favourite sessions are:

Here in Tassie we have the best training location in Trevallyn which has some of the best hills. This session always leaves me in a world of hurt but I get the most satisfaction from this session. It always helps when I have dad on the bike right next to me and mum about 60m up the road for me to chase down, which is sometimes hard because she goes faster than she needs to.

The first time I did this session was at a TTP training camp, and Abbey De al motte took the session. I have loved doing it ever since. I find this session isn’t too hard but is still very beneficial.

This session Dad made for me, is to get me ready for 3000m steeples. We put the hurdles in the same place as the steeples are and run the extra 40m to mimic a normal lap of steeple. I do each lap at my goal 3000m steeple pace.

This session is a lot of fun but always hurts a lot.

I love this session for endurance but also speed, the last few efforts really hurt and it really builds up the lactic but is defiantly worth it.

They are my 4 absolute favourite training sessions and that I feel I get the most out of. I would like to say a big thank you to Runner’s tribe for having me share my story and training. I hope everyone that reads the blog can get something out of it.