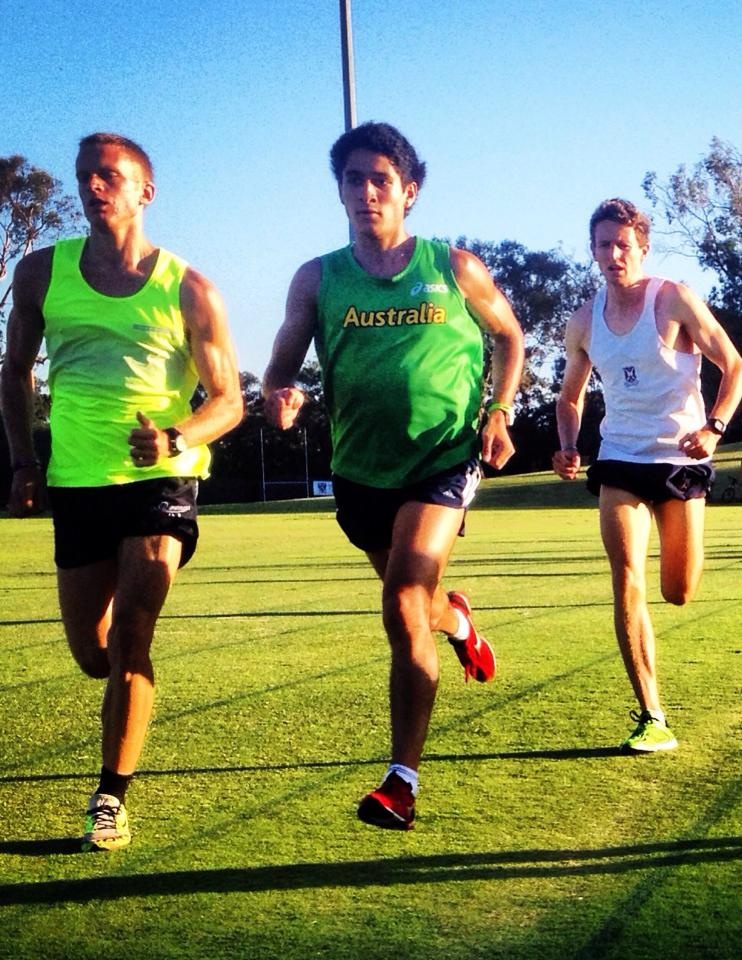 Recently, young West Australian middle distance runner, Jonas Aranda received an exciting offer to continue his education and athletic career at Harvard University. We scratched beneath the surface and discovered Jonas is the product of a long line of successful middle distance runners from Aquinas College, which traces back to Olympic 1500m champion Herb Elliot. Furthermore, his training group in Perth is producing some of Australia’s top middle distance talent, including Sam McEntee, who last year ran 3.36 for 1500m and 7.54 for 3000m while on scholarship at Villanova. As his career moves into an exciting new phase, we sat down and uncovered more about the culture which is producing such strong middle distance development and also the future for Jonas at Harvard.

Hi Jonas, what an exciting opportunity you have been given… Why Harvard and how did this opportunity arise?

I am still in disbelief about my acceptance into Harvard. It’s such a relief now that it’s all official. The idea of wanting to go to Harvard came throughout my final year of high school, when I sat down to have a coffee with another Australian boy who had just graduated from Harvard. The only point that I took away from our discussion was that if I wanted to get into such a prestigious college, or any college for that matter, I had to make myself known to them, present myself to them as a nice whole package.

That night I emailed all of the coaches at Harvard, giving them an update on my current academic and athletic success. Almost immediately, the Head Track and Field Coach replied and told me the extensive application process needed to get in and times I would most likely need to run. I knew instantly I wanted to attend this college and so began a year long process of applying for Harvard. Whilst in the USA I know first and foremost that I am there to get an education, and so a prestigious and well-renowned college like Harvard immediately caught my eye. As a bonus, they had a strong middle distance training squad and after a few Skype calls with the head coach, I knew this college would do wonders for me.

How did you first become involved in Athletics and in particular the middle distance events of 800m and 1500m?

I became involved in athletics at the age of 10 when my parents enrolled me and my 2 younger siblings in the local little athletics club. The more competitions I competed in, the more I began to realise my talent in the middle distance events, yet I still competed seriously in the sprints and even the jumps! It was only until high school in Year 8 that I started specialising in the 800m and 1500m, events that showcased my ability to combine fitness with speed!

You have had some outstanding results as a High School runner representing Aquinas College, can you tell us a bit about your time there as well as highlight some results you achieved whilst a student there?

I cannot speak more highly of Aquinas College. It was a school that gave me a holistic education whilst at the same time allowing me to compete in my chosen sport of athletics. In summer, I would enjoy a friendly game of tennis or water polo, but the winter season was filled with intense cross country training/racing which then led nicely into my track season beginning around September. I’ve had many memorable racing experiences whilst at Aquinas, the highlights coming though on my favourite surface… track.

We heard that you finished your high school career at Aquinas with quite a bang at the PSA Athletics Carnival….can you share with us how the day went?

It was my final year obviously and I had the gruelling task of competing in the 1500m, 4x400m, 800m and 400m in that very order at the Carnival. As it was my last year I wanted to leave my mark, so I began by running a 3.57 in the 1500m, breaking the previous record by 5 seconds. I then ran the 4x400m where we cruised to a comfortable victory and 45 minutes later ran the 800m, which I decided to win in a sit and kick style race. Finally, I managed to withhold the pain and compete in the 400m, running a personal best of 48.87 to claim a new record! 4 wins, 2 records – it was definitely the highlight of my running as a high school student at Aquinas.

Outside of school, can you tell us about your current squad of training partners as well as the coaches that have assisted you with your training?

I first joined the Team GMAN training group in 2010, led by coach Gareth Elliot at the time. I’d been asked to join by fellow high school mate James Davidson, another phenomenal runner. Over the years the squad has grown massively, and the support and encouragement we all give each other is second to none. Although Gareth is no longer the direct coach, he has been responsible for my gold medal in the 1500m at the National Junior Championships as well as handling my college affairs. The current training squad is now coached by Ben Green and training group includes Jordan Makins, Alex Dreyer, Timothy Lefroy, Daniel McQuie, Douglas Foulkes-Taylor, Cormac Gallagher, Chris Elmslie, Tom Kozak, Andy Lewin, Ben O’Connor and Alain Dutton! Ben has helped each and every one of us achieve our running potential, and we owe a lot to him.

I’ve always thought of my training group as my second family. They have always supported and encouraged me in my athletic pursuits, and for us as a group, no goal is too big – the sky’s the limit. Doing sets of 400m, with little recovery, is not something that many would call fun, but when you have a squad like ours, where everyone’s competitive nature allows you to push yourself that extra mile, and you work together to knock out those reps, one at a time, metre by metre – then it becomes exciting! I’ve learnt from my training partners how to race smart, and the importance of recovery and listening to your body. If it wasn’t for my training squad, I would have never have dreamed of going for World Junior Qualifiers, but thanks to them, we have turned many goals from a dream into a reality.

You have posted some outstanding junior results across, state, national and international competitions. Can you highlight some personal results you feel you are most proud of?

This is quite a tough question as there have been many results that have been quite memorable, however there are a few that do pop into my head. I’ll focus more on the national and international results: there was my first gold medal in the 1500m at the Australian Junior Championships (AJC) in 2011 as well two silver medals in the 800m and 1500m at the Australian All Schools in Brisbane later that year. In 2012 I place 3rd in the 1500m at the AJC and later that year placed 3rd again in the 800m at the National All Schools in Tasmania. I was then selected to represent Australia at the Youth Olympic Festival in Sydney in January 2013, where I claimed silver in both the 800m and 1500m. In March that year I then placed 2nd in the 800m at the AJC. My biggest win off the track was most probably the 2013 City to Surf where I won the 4k event in a course record time of 11.37, as well as winning the State Cross Country Championships over 6km in my final year of school. My current 800m and 1500m personal bests stand at 1.51.86 and 3.52.20 respectively, with both these times narrowly missing World Youth Qualifiers.

The decision to leave home and head over to the NCAA system in the USA can be a life changing opportunity. How did the interest develop for you and did you have any training partners that had made this move prior to you?

In my training squad, two team mates have made the move to college to compete in the NCAA system. The first was Alex Dreyer and the most recent one was Sam McEntee, who has run an Olympic B qualifier in the 1500m. These guys have told me so much about making the movie to college and nothing excites me more. For myself, these last 3-4 years have been where the thought of going to America started to develop. I knew I wanted to go and experience college life as it was an opportunity for me to combine my education and running at the same time in a way like no university here in Australia could offer. The lifestyle and level of competition in the NCAA system is truly something remarkable and an experience I will surely never forget and that I highly recommend to anybody interested.

Just in wrapping up, what are your current goals for the rest of the athletics season and when will the exciting move happen for you?

My goals for the rest of the athletics season are quite simple really. I want to run sub 1.50 for the 800m and sub 3.50 for the 1500m. If I get a World Junior Qualifier in the process, then that would be a bonus. I’m due to start college in the fall of 2014, so roughly around August. However, I am keen to go to Kenya with my training partner Jordan Makins (Ed Note: Jordan recorded a WJQ with a 1.49.33 at the Perth Track Classic), who also plans to make the move to the college system way of life. Basically, I will have National Juniors in March, then in April fly to Boston for orientation at Harvard for a couple of days. From April till around June, I plan to train here in Perth while trying to introduce my program that I will have in America, doing a few road races possibly along the way. Then as I mentioned earlier, I plan to fly to Iten, Kenya for some high altitude training – a lifestyle of just eat, sleep and run, with the occasional game of cards or ping-pong. The rest of this year is going to be a whole new experience for me, but I’m looking forward to seeing what the future holds in store for me.

Thanks for your time Jonas and great to understand more about your background and the exciting opportunities ahead. Everyone here at Runners Tribe wishes you all the best and will watch your progress with interest.