Home Features The 11th fastest Australian female marathoner ever – An Interview with Sinead... 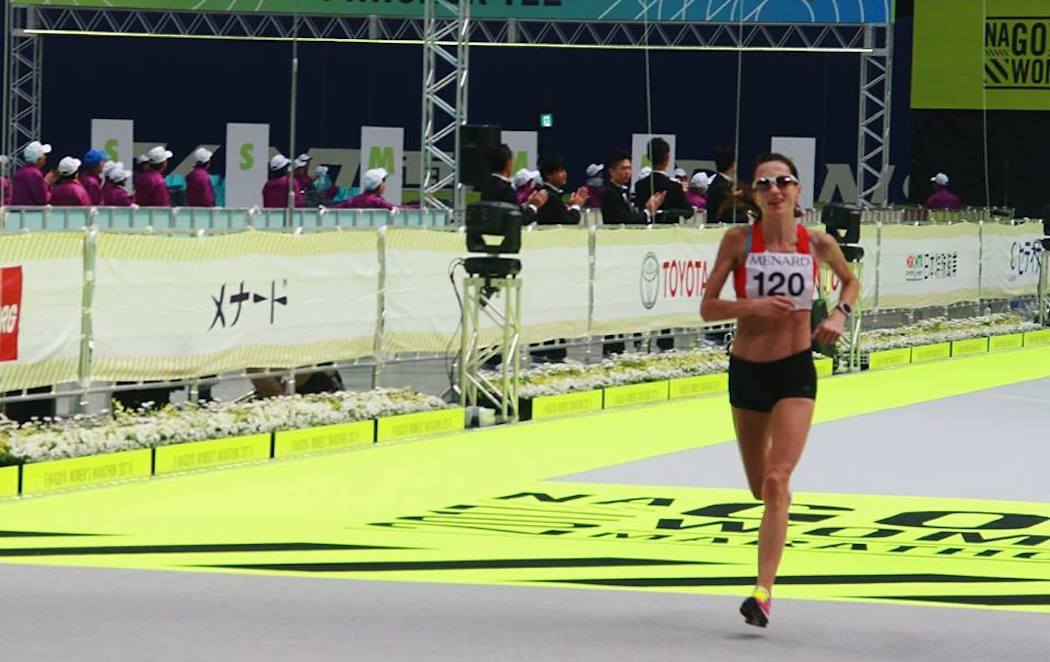 South Melbourne Athletic Club’s and Tim Crosbie coached Sinead Diver has only been running seriously for just over 5 years. In that time she has recorded a time of 2 hours 34 minutes and 15 seconds in her debut marathon in Melbourne, represented Australia in the Marathon at the 2015 World Championships Beijing, and has just recently become the 11th fastest Australian female marathoner ever by running a 2:31:37 at the Nagoya Marathon. This time also placed the former Irish native 5th all time there and is a 2017 World Championships qualifier.

At the Nagoya Marathon, you finished 10th with a time of 2:31:37 clocking a London 2017 World Championships qualifier. How amazing does this feel and are you surprised you ran an almost 3 minute PB?

I wasn’t surprised by the time. That was in the range I was aiming for. I’ve been training better than ever over the last few months and knew I had it in me. I just had to hope that it all came together on the day.

You’re now ranked 11th on the Australian All-Time Marathon list, 5th on the Irish All-Time and have run the fastest marathon ever by an Australian 40+ woman. What were the keys to this ultimate success and massive PB?

There’s no doubt in my mind that the key is getting a consistent uninterrupted block of training under your belt. I’ve been training steadily for almost a year now and this is the longest stint of injury-free training I’ve had. My last marathon didn’t go well, but I pulled up good from it so I could build on that fitness rather than starting from scratch.

Nice work Diver… a big PB of 2:31.27 in Nagoya. 11th on the Australian and 5th on the Irish All Time marathon lists. I know what this one meant to you and it was so nice to share that moment when you finished. @crosbiecrew @athleticsvictoria @athleticsaustralia @aurora.fitness.massage @south_side_fitness_stkilda #londonbound?

Over the years have you ever given up or contemplated giving up on running, and what have been the pivotal things that have kept you striding forward in the sport?

I’ve had 2 significant injury spells where we haven’t been able to figure out what the issue was. There was nothing broken, fractured, torn…everything was fine but I couldn’t run for 2 minutes without severe knee pain. The worst thing was not knowing what was wrong and as the months rolled past there was no improvement and no end in sight. It was a very challenging time and on a couple of occasions, I did wonder if it was all worth it. The love of running has always pulled me through, though. It’s a massive part of my life and I hope to be running for many years to come.

How long till you get back into full training post marathon, and what’s the general plan for the next few months?

My main focus for the next 2-3 weeks is recovery. After that, I’d like to work on my speed and improving my times over the shorter distances. I’m hoping my next marathon will be London, but I won’t know that until team selection in May/June.

Can you give us an example of a peak training week? And what would be your typical weekly mileage?

I increased my weekly mileage for this marathon stint. I got to a peak of 180km and that week would’ve included 1 speed session, 1 tempo run, a long run and either a short race or another shorter speed session. I also do 1-2 gym sessions a week. When I’m not in marathon mode my typical weekly mileage would sit around 100km.

Favourite thing about being a runner?

Hhhmm..this is a tough question! There are so many things I like about being a runner. I love the challenge of pushing myself through tough training sessions and that sense of achievement at the end of a race. I love how it keeps me fit and healthy. I love all of the friendships I’ve made through running. I love that I get to travel to & experience lots of unique places through racing. But I guess my favourite thing is how it makes me feel. It really helps to clear the mind and no matter what kind of a day I’ve had, I always feel great after a run. Being a runner makes me happy!

Thank you and congratulations!