Home Latest News Why you are 12% more likely to run a marathon at a... 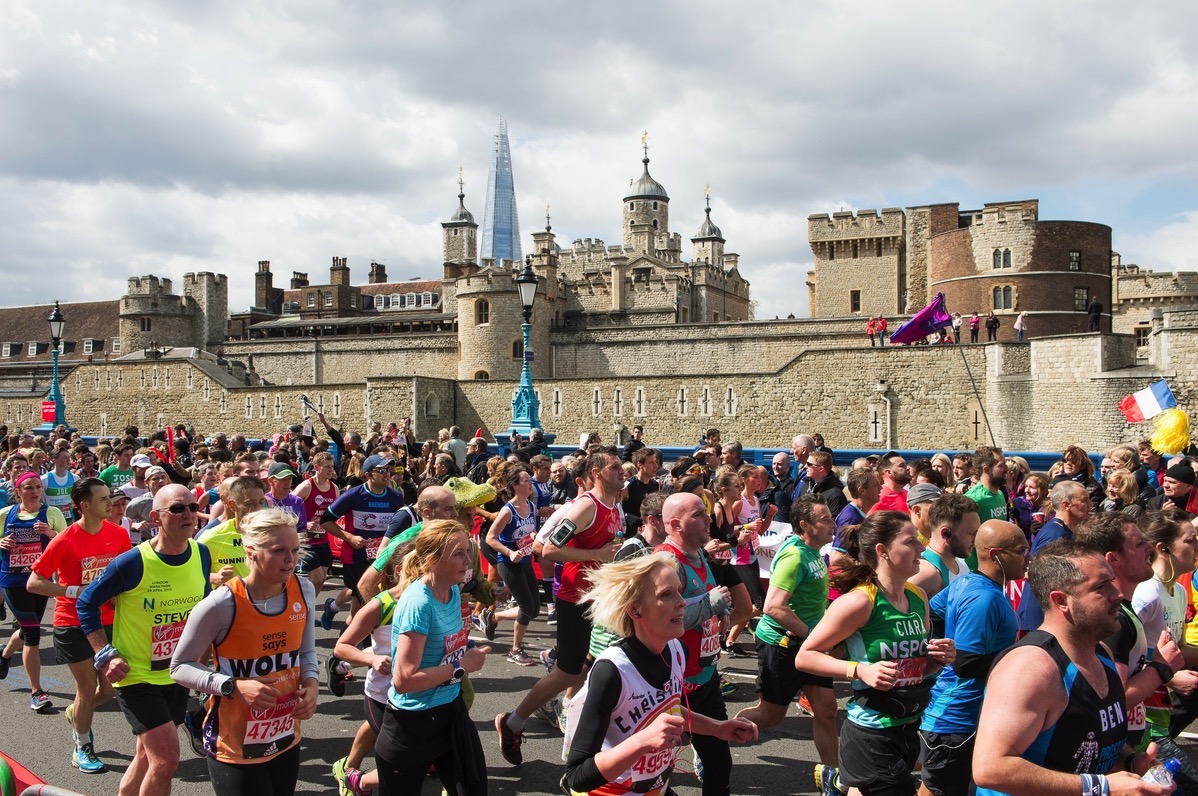 In this article, we focused on the age distribution of marathon finishers. And we were looking for the patterns in the participants’ age.

For this research, we have analyzed 2,340,118 results of marathon finishers from 148 races.

Also, we interviewed 7 experts and asked for their observations and explanation of the visible trends. 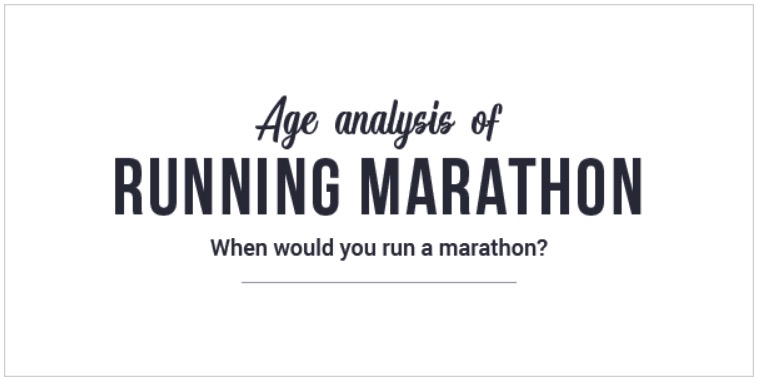 The following graph shows the age distribution of the marathon finishers. 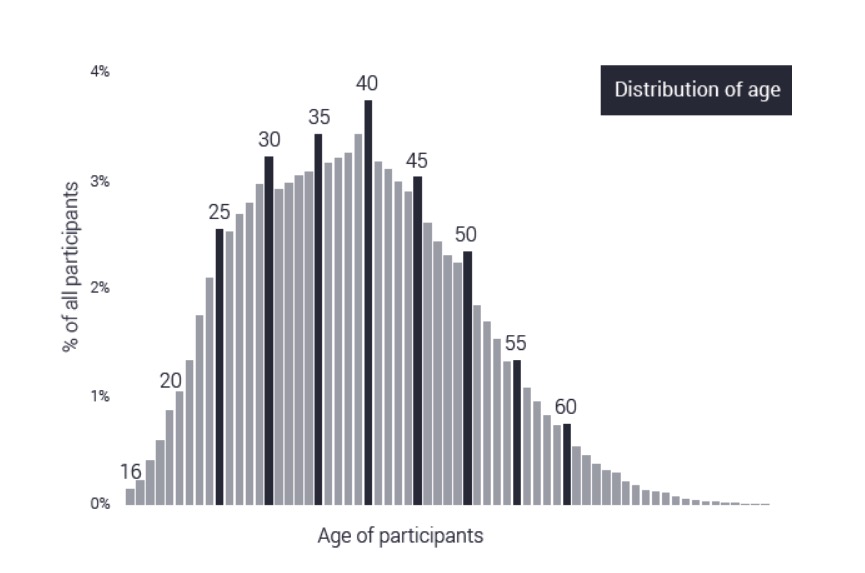 And as we can see, people are more likely to finish a marathon at a milestone age.

To examine this trend deeper, we asked for the observations and opinions of various experts, with different points of view:

Running a Marathon as a Milestone celebration

The new behavior research shows that we are more likely to do something new or change when we are approaching the beginning of a new decade. Our data confirm that. And also, we can see that the middle of the decade – the ages ending in 5 are also powerful.

As Susan Arruda says “the spike in participation at these ages could be explained as a desire to celebrate these key times, both new and mid-decade, with a significant achievement. Like celebrating a milestone. The middle of a decade represents the passing of one phase and the teetering towards another decade. I have noticed that people will say that at 25, they are already thinking “I’m nearing 30.” 20 and onwards represents the onset of responsibilities of life.”

“For a lot of people, milestone ages make them want to achieve – or try- something new as a celebration and also a validation that “Life Is Short. Make It Matter.” – Melanie Young.

Also, “some people set the marathon as a dream goal. We know many people do not run marathons repeatedly, but the thought of completing one is a “bucket list” item and milestone ages and dream goals connect nicely in the minds of some folks” is the opinion of Jason Fitzgerald and John E.Coumbe-Lilley.

Usually, we become more contemplative at the end of the period – let’s say at 24 or 39. And start thinking of the new beginning. We believe that running a marathon is a serious achievement. Especially in those times, so we decide to do it right and train properly. So, it’s our belief, that most people start their preparation at the end of the decade or “mid”-decade, but the actual event is marking the beginning of the new stage of their lives.

So, if a marathon is on your own bucket list – you know when you are most likely to do it!

Women are 15% more likely to run a marathon at the beginning of a decade. What about men?

We all know that men and women are different. Different in our physiology, psychology and in our gender roles. So, let’s take a look at the trends. 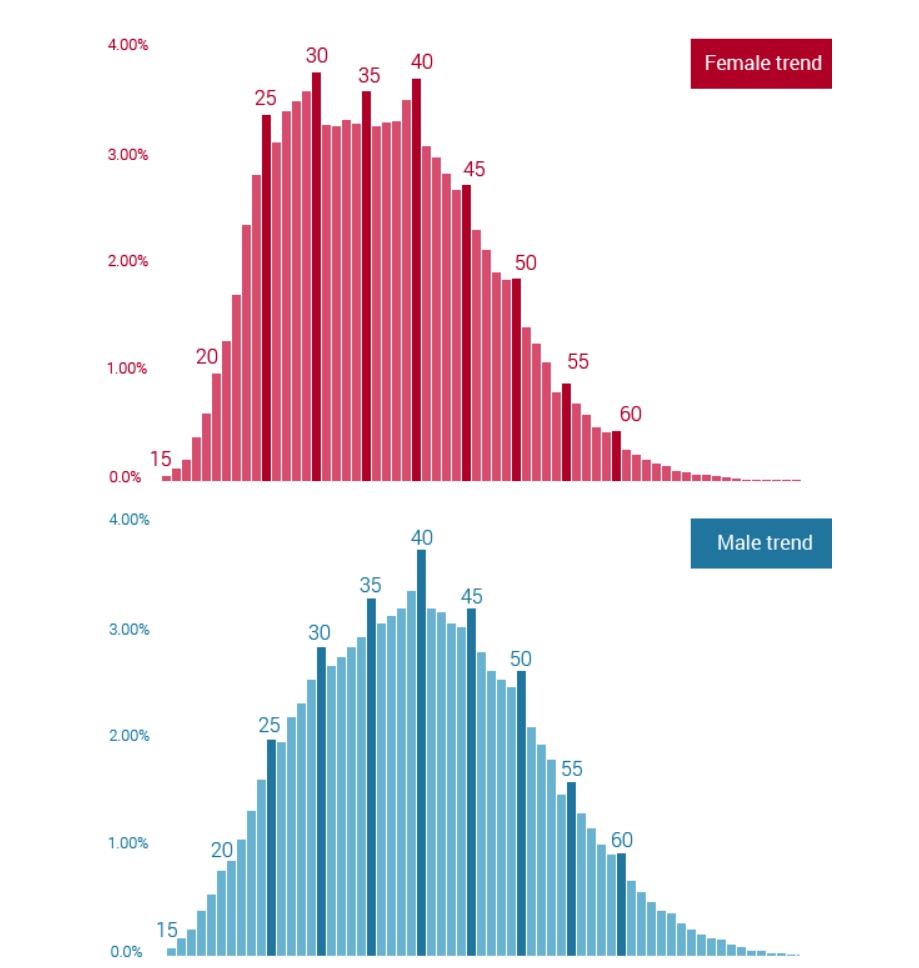 Also, for women, the spikes in participation are more pronounced. Women are 15.1% more likely to run a marathon at the beginning of a decade and 12.3% more likely in the middle of the decade.

There are a number of reasons for this.

All our experts agree that women’s participation peaking earlier reflects female’s tendency to give birth and start a family around the age of 30 and earlier. As we can see from the graph provided by Robert Jackson women become parents earlier than men. And also, still, women take up more of the responsibilities of raising children. And are more likely to have a shift in priorities – from a focus on themselves to a focus on family. 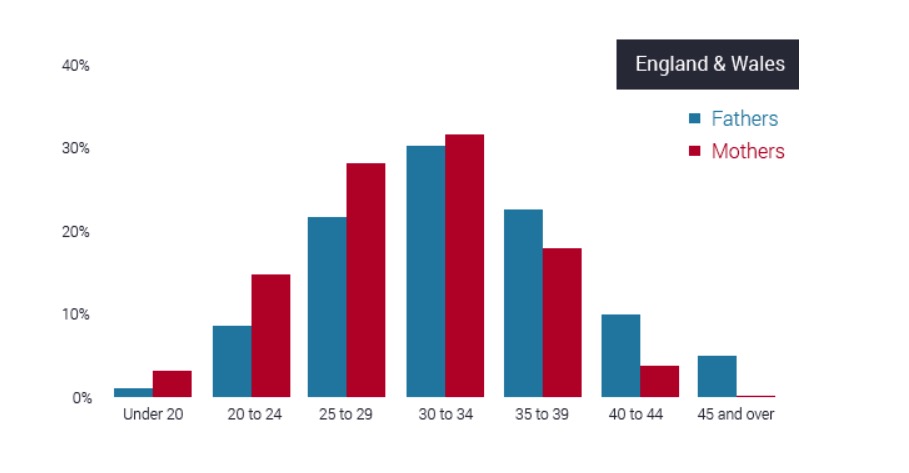 Another thing to consider is that, according to science, the average person’s health starts slowly deteriorating after 30. Women, because of pregnancy and other societal pressures are more aware of this and start taking better care of themselves earlier. Men, usually do this, when they get a sign that something is going wrong.

As Dr. John Rusin says “At 40 men have dips in testosterone and are starting to store fat at an increased rate. Then it becomes clear that they need to start doing something. Why not the most common physical practice in the world? “

Another factor is that women, in general, are less competitive, as Susan Arruda points out. So, women are less inclined to enter multiple marathons and competing with themselves to get physically better and better or to beat someone else. For most women running a marathon or a couple of them is quite enough. And when other responsibilities come knocking, this is the first to go.

On average, also, women tend to have more spiritual pursuits, especially after they have children, as Melanie Young observes. So at a point, they start diluting their focus from pure physical achievement. 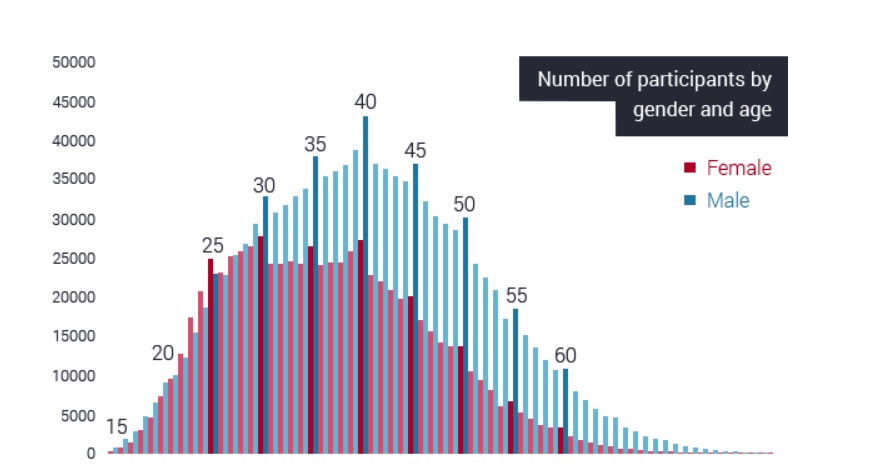 This opinion is backed up by our data. As we can see, men and women finish marathons in equal numbers by the age of 27 – 28. Then the numbers of male participants greatly overshadow the numbers of women.

This study has been conducted by Jens Jakob Andersen a former competitive runner, founder of RunRepeat and statistician from Copenhagen and Ivanka A. Nikolova, Ph.D. in Mathematical Analysis.