Home Events ROTTNEST RUNNING FESTIVAL – Get Your Entries In 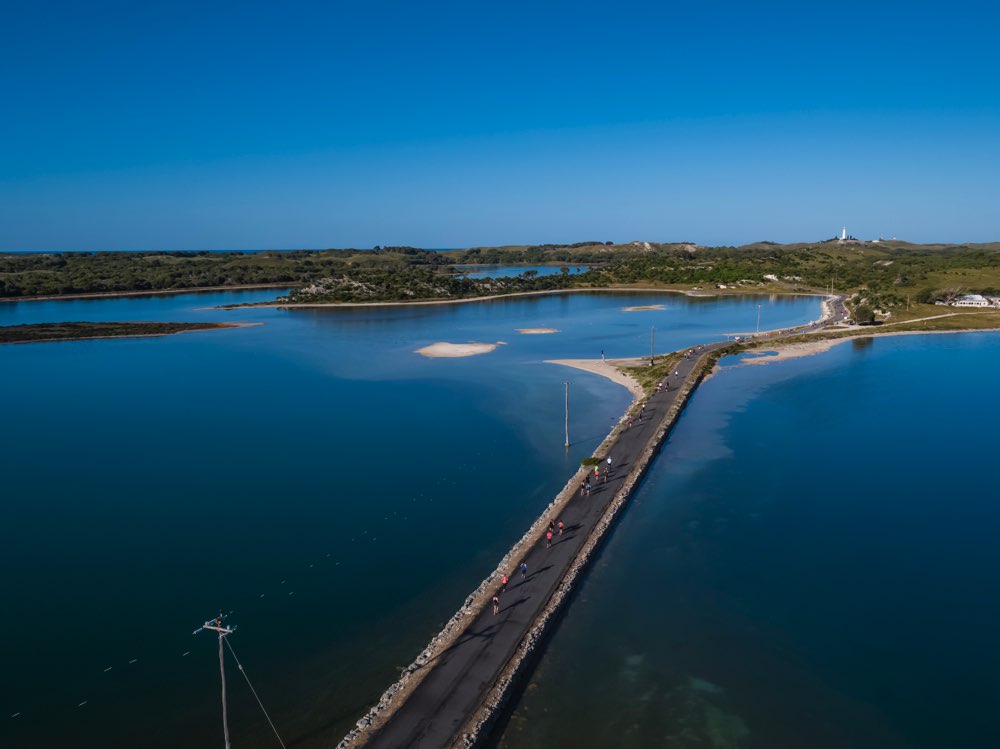 ROTTNEST RUNNING FESTIVAL – GET YOUR ENTRIES IN 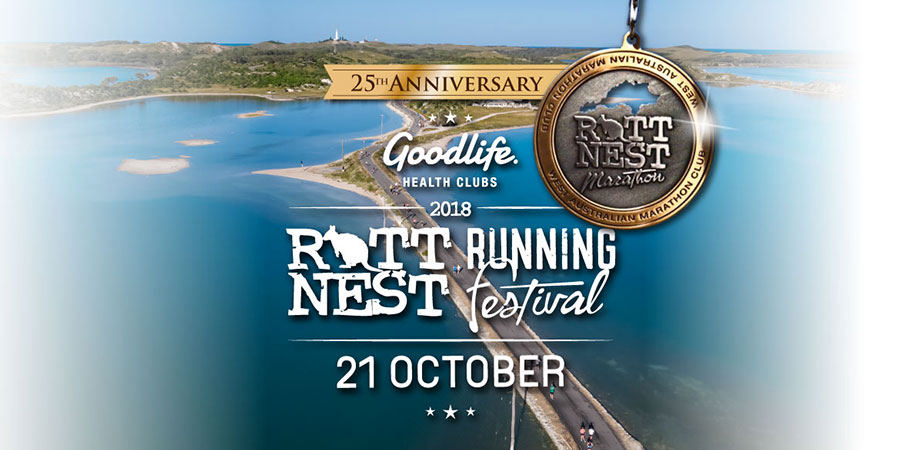 These words still ring true on the now infamous Rottnest Running Festival. For the last 24 years, runners have visited this tiny island 19km off the coast of Perth, to experience pain and pleasure. Rottnest Island sits just offshore from the city of Perth, in Western Australia. A protected nature reserve, it’s home to the quokka, ‘the happiest animal in the world’  – a small wallaby-like marsupial. The island covers just 19 square kilometres (7.3 sq mi).

From the mainland, it’s just a short 30 minute ferry ride in which runners and spectators have the opportunity to arrive days before the race or come across on the marathon ferry at 5.30am.

Rottnest is a popular holiday destination for locals and international visitors with daily ferry services from Perth, the state’s capital and largest city. It has a permanent population of around 200 people, with around 500,000 annual visitors. White-sand beaches and secluded coves surround the island with names such as the Basin, Armstrong Bay, Geordie Bay and Fays Bays all with its shallow waters, and Thomson Bay, the main hub and ferry port.

In October every year, runners flock to the island to undertake the scenic course around the island, opting for either a 4 lap Marathon, a 2 lap Half Marathon, a 1 lap 10km or 5km course. The course has been designed to ensure runners take it the magical scenery of the island and experience everything the island has to offer. The course is undulating and showcases views that will last a lifetime.

The race itself starts in Heritage Common and heads out across the salt lakes, towards Armstrong Bay, where runners are exposed to an ocean view that must be seen to be believed. Runners circumnavigate the island to ensure the best parts haven’t been missed. Is the course easy, short answer no, it’s undulating but thanks to the diverse landscape you get lost in the moment.

What makes this course even more iconic is the various parts of history that are still recognised as part of the race. For the last 24 years, 5 minutes before the start of the marathon, bagpipes begin to play the eerie tunes of Amazing Grace, it’s iconic and sets the scene for the day ahead. The inaugural Rottnest Marathon was run in October 1994. In that year 72 runners completed the scenic undulating island course and a plaque with the names of those finishers was placed in the Rottnest Hotel, then known as the Quokka Arms. Ray Brown took out the men’s race in a time of 2.35.50 and visiting New Zealand runner Nyla Carroll took the women’s title in 2.52.20.

The race has established its own bit of mythology. The legend has it that Harry McFordyce, an immigrant prisoner on Rottnest Island some 70 years ago escaped the hands of justice and attempted to run off the island. On the fourth leg around the island McFordyce succumbed to dehydration and died.  If you run the marathon you will see and hear the ghost of Harry playing his bagpipes throughout the race. Two bagpipers stand atop Armstrong Bay playing the infamous tunes. On the last lap at the foot of Harry’s Hill you will be given a gold coin, to which you must carry up the hill and deposit, in Harry’s tub. Legend says failure to do this will result in cramps, dehydration and a possible DNF imposed on you by the ghost of Harry.

Bagpipes aren’t the only historical part of this island race. The Dutch mariner Samuel Volckertzoon wrote of sighting “a wild cat” on Rottnest Island in 1658. In 1696, Willem de Vlamingh mistook them for giant rats and named the island “Rotte nest”, which still stands today. You will see thousands of these native marsupials around the island and rather being named a rat back in the 1600s, commonly looks like a very small kangaroo. The tiny creature now features prominently on every finisher’s medal.

Whilst not a fast course, the Rottnest Running Festival holds a distance for everyone. The course is marshalled by some of Western Australia’s greatest runners and the friendliest volunteers not to mention the army cadets who are posted at all of the water stations. The cadets, in full uniform, having been visiting the island for years to offer aid to the runners. 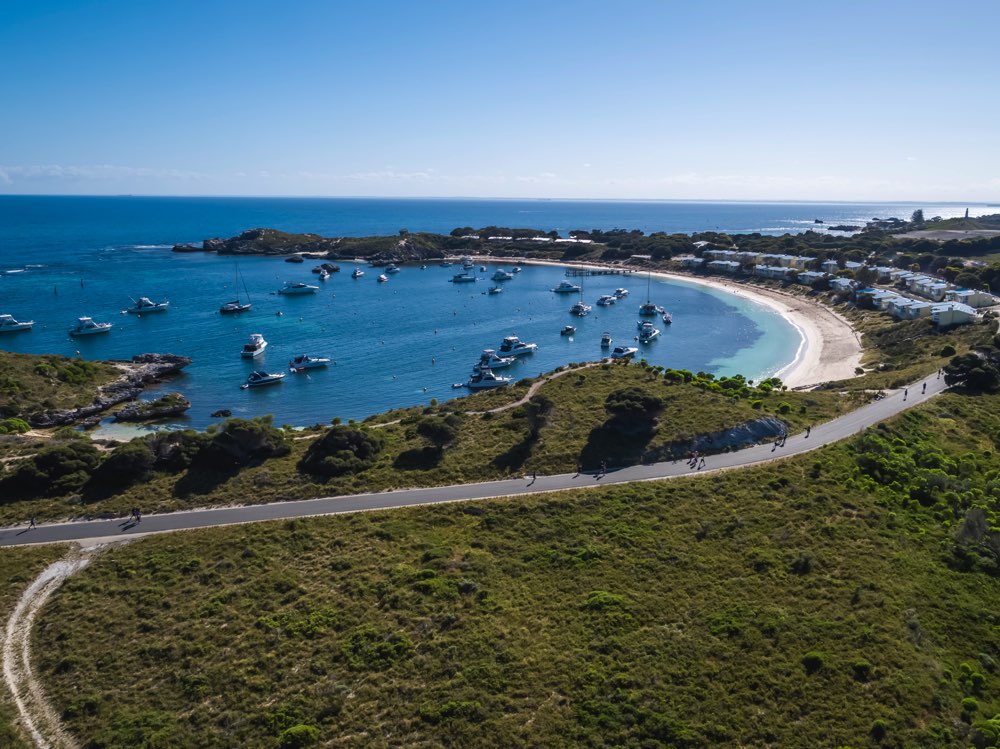 At the conclusion of the race, it has now become custom to share the tales of your day at the Rottnest Hotel. This hotel has become the drinking hole of locals and tourists alike. Like any drinking hole, many friendships have been made and many stories have been told, there is one story that underpins them all, ‘I Came, I Saw, I Conquered’…

The Rottnest Running Festival is a unique event on a unique island and it’s definitely a race to place on your bucket list.  21 October 2018 marks the 25th year of the event and celebrations for this event will be bigger and better than ever! 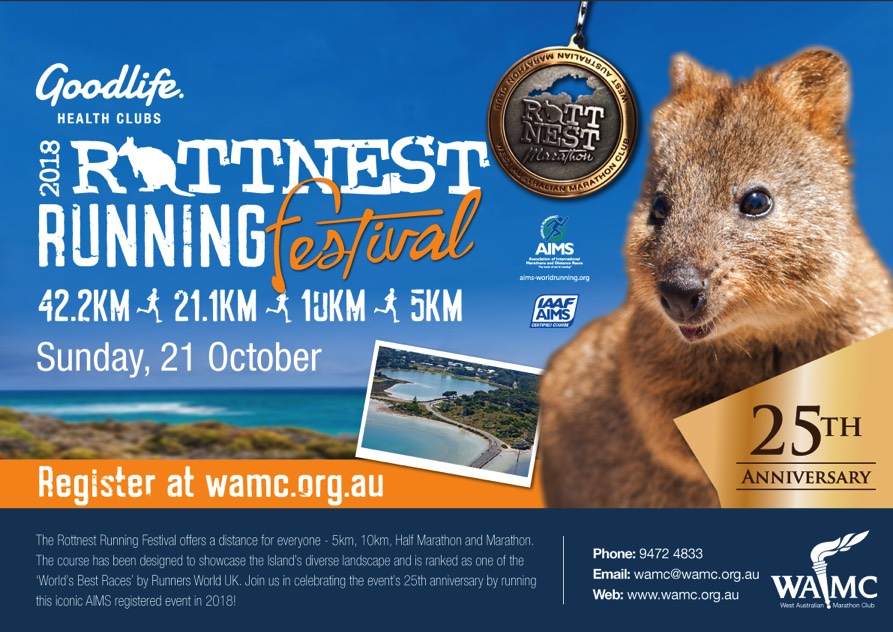