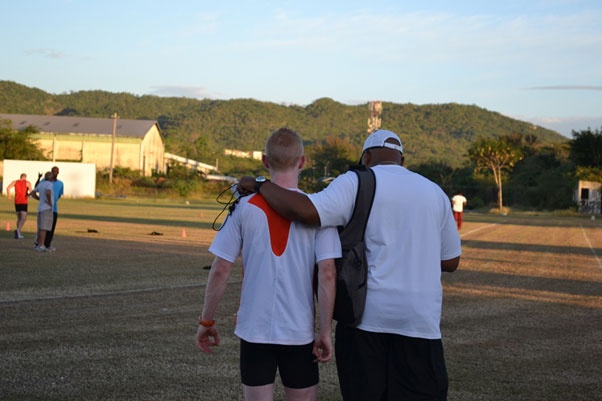 As prominent Australian 400m hurdler Jack Harvey (@_jackharvey) states on his Twitter Bio “any fool can run in circles, but it takes a wise man to hurdle”, this cannot be more relevant to the event I like to dabble in. Mentally, physically and emotionally it is a nightmare for one to grasp full control of the concept and then deliver under pressure. It is the intelligence within all 400m hurdlers that surfaces when they transition to the next level.

My 2012/2013 season started in early November 2012, from then until this day I have raced a whopping 28 times…what a season it has been, with many experiences and highlights to remember for a life time. I was fortunate to be a part of the Competitive Edge Jamaica Training Camp conducted by Hayden Knowles of Competitive Edge Aust.Pty.Ltd which took place in January this year. To say the least it was an eye opening experience in the way in which they approach the sport of Track & Field. The athletes at G C Foster College had the utmost faith that if they put in the hard work and dedication they would ultimately achieve their goals.

Day 1 in the Caribbean saw the group of athletes sitting around a table (including London 4x100m Olympian Andrew McCabe) discussing what it meant for us to be there and our season goals. At this moment Jarrod Geddes and myself jumped at the opportunity to declare what we wanted to achieve, we both had the same goal – to win our respective events (100m/400mH) at the Australian Junior Championship held in Perth with the idea that the Jamaica trip being a stepping stone towards our goals for the Australian Junior Carnival.

Having had the carnival pass just one week ago, we were both able to fulfill our goals of winning our U20 Australian Junior Championship title. As we were both were coming from injury plagued backgrounds this was very satisfying to have now provided evidence to back up our statements in Jamaica.

Maurice Wilson – Current Head Jamaican Olympic Coach was a major mentor whilst in the Caribbean with his expertise and training philosophy of getting the most out of his athletes benefitted me greatly. Wilson has been quoted saying to myself mid and post training session “do you ever get tired” and “Your tough man, real tough, you’re the athlete I want to coach”, these comments were especially humbling to hear as a well-known internationally respected coach is taking time out to watch and critique training sessions of athletes that aren’t his own. A place I plan to revisit to further enhance my skills to grasp the competitive edge that Jamaican born and bred athletes seem to have encoded within them.

The 2013 Australian 400m hurdles Domestic season kicked off in Hobart at the Briggs Athletics Classic, in far from ideal hurdling conditions the wind was always going to play a major role in the outcome for most athletes in the race. Unfortunately running a slower time than first expected it was no doubt the initiation of my senior career. Huge congrats to Ian Dewhurst who has started climbing his way into the pointy end of 400m hurdles scene with massive performances at the Briggs Athletics Classic and Perth Track Classic, claiming some major scalps along the way.

Perth Track Classic was next on the agenda in an attempt to make a strong mark within the senior ranks, it wasn’t to be… possibly expected as I had come off 2x400mH + 1x4x400m leg within 3 days. This was my fourth race within four days, heavy and fatigued muscles were something present before the warm-up had even occurred. It isn’t every day you line up in the same race as 3 Olympians (Brendan Cole, Tristan Thomas and Michael Bultheel – Belgium), a 3xNCAA Champion/World Championships representative over 400m hurdles (Jeshua Anderson, USA) and the highest of quality of up and coming Australian athletes. Even though thus far the Australian Athletic Tour meets for 2013 were unable to provide me with PBs and smooth runs it provided me with enormous amounts of experience and motivated myself to endeavour to succeed within these meets for the following season. It may take time and persistence to make the perfect transition into the senior ranks of the 400m hurdle event within Australia but it is definitely something I am working towards each day. Every session counts, no stone will be left unturned.

Season 2012/2013 is far from over, I will be competing at my second senior Australian Athletics Championships in mid-April and also potentially gain entry to the IAAF Melbourne Track Classic World Challenge. On another note, I am really looking forward to getting stuck into the long and hard training sessions throughout winter which will hopefully help me in my transition to the next level. Leana Joyce (my coach) and I started to plan the next season on the plane trip back from Perth.. the four hour flight went so quickly!

PS Wishing Andrew McCabe all the best at this week’s Queensland Track Classic – lining up in the 100/200m double after a slight hamstring tear at the NSW Championships. Get those World Championship qualifiers you deserve!!

Until next time….thanks for reading,