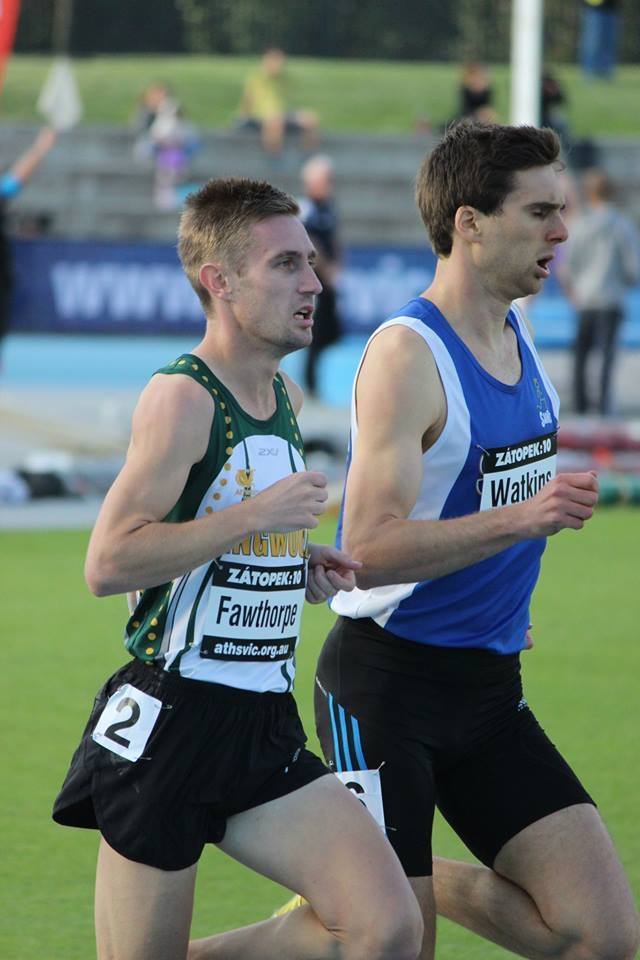 I am Tom Fawthorpe. A 24yr old middle distance runner from Victoria. The events I compete in are 800m and 1500m. I have been running since I was 13 for Ringwood Athletics club and am coached by John Walker.

Firstly I would like to thank Ross at Runnerstribe for giving me the opportunity to blog for the website. I have always enjoyed reading what other athletes have been up to and gaining an insight into their training and racing schedules.

2014 was a good year for me. It was the first year I had been completely injury free. In 2012 I was diagnosed with a stress fracture in my navicular. Unfortunately this was a massive set back and wiped me out for the 2013 summer season. In June 2013 I eventually had surgery on my Navicular.

Some of my personal highlights from 2014 included, placing 5th at Melbourne track classic (1500m), 5th at Australian Championships (1500m), running a new pb over 800m (1.49.8) and placing 4th in the Leonora Golden mile. I was also lucky enough to compete in the Cook Islands at the Oceania Championships where I represented Australia and won both the 800 and 1500m. Even though this was a small international event it was a really good experience. I think my biggest highlight though came late in 2014 when I won the NSW state 3000m championships with a new pb of 8.03.12. This was a massive 11 second pb for me and was really unexpected.

The key factor for me getting back to running at my best was the amount of consistency I’ve had in my training over the last year. I am a big believer in quality over quantity, this seems to be working for me at the moment as my body is not breaking down like it did in previous years. I have also added 3 gym sessions per week into my training with my strength and conditioning coach Darren Rowland. Darren has spent countless hours putting programs together for me to get my body stronger to reduce the chance of injury and increase my performance on the track.

As for the upcoming season, I’m hoping that in 2015 I can continue where I left off last season. Last year I got a start in the Hunter, Adelaide and Melbourne track classics. I really enjoyed racing the best guys in the country over 800m and 1500m. In those races I was competitive for the majority of the race but didn’t have the strength over the last lap and ended up finishing 5th or 6th (apart from Adelaide where I had a shocker and finished last!!). One of the goals this year is to be a consistent starter in the AA tour meets and be towards the front of the field rather than being in the middle of the field. I have just come off some good and consistent training this winter and am fitter and stronger than the summer season past. With all that training behind me it gives me the confidence that I can compete with the top guys in the country. Something that has eluded me for a few years now is a 1500m pb. My current pb is 3.46.45 and isn’t really that quick compared to some of the other top 1500m guys in the country. I have brought my 800m and 3k pb down so I know a 1500m pb isn’t too far away!

That’s it from me for now, but before I sign off I would just like to thank a few people. One of those is Sports podiatrist Jason Agosta. Jason helped me manage my injury and has kept me on the track over the last year. I would also like to thank my sponsor Brooks running for their support over the last 3 years and my running coach John, who has spent many years and time coaching me. Last but not least I’d like to thank my family, girlfriend Sophie and my training group. These guys always support me no matter what!

Thanks for reading and good luck to everyone for the season!
Tom