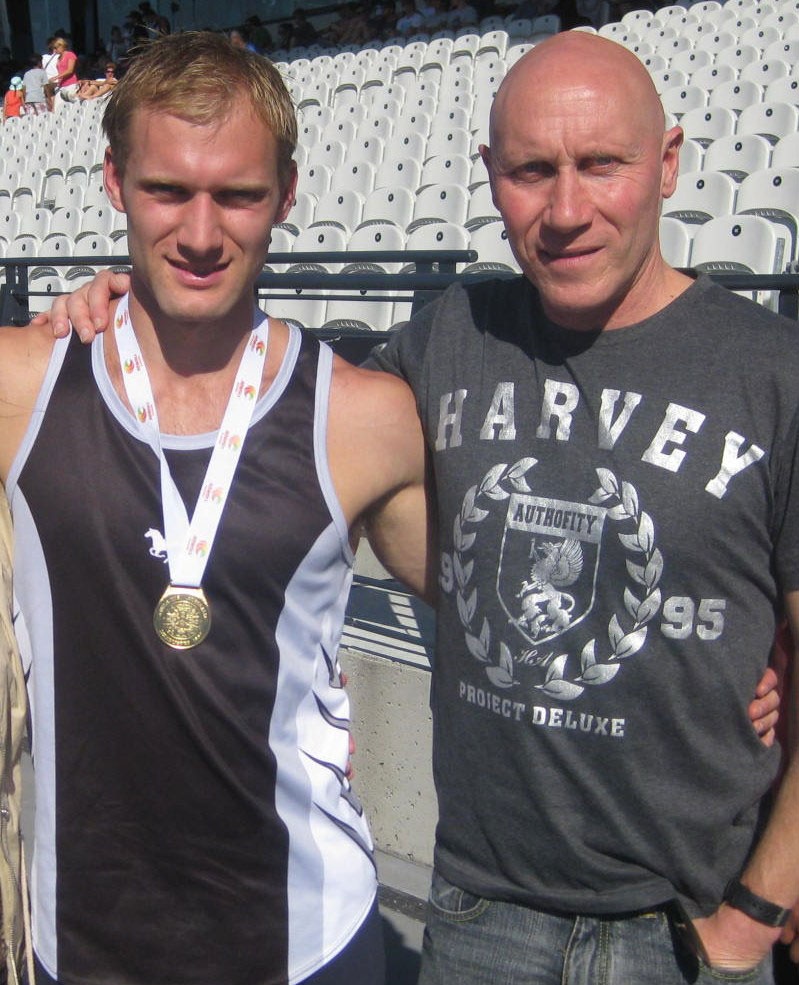 Joel Pocklington did not fail an attempt on his way to defending his national pole-vault title yet he could not carry on jumping towards a personal best.

Only a few months since losing his father to cancer, Joel battled back from injury to claim his third consecutive Australian pole-vault title forcing his athletics career back on track.

“I jumped 5.20m and won and then decided not to go anymore because it just sort of hit me that dad was not here to enjoy it with, it was bittersweet,” he says with a smile.

In the most devastating year of his life he was the champion again, and that was enough.

Joel’s father, Colin, was a national level sprinter who competed at an elite level into his fifties making the final in the 60m dash at the Masters World Championships in 2009.

Colin was the reason Joel is involved in athletics and their relationship through sport was deep and profound.

Joel showed some promise as a hurdler when he joined Box Hill Athletic Club. It wasn’t until the pole-vault coach caught wind that he was previously a gymnast that he found his event.

“I like athletics but being able to use my gymnastics skills in athletics was something that was pretty cool. I didn’t look at pole-vault and go, yeah sweet I want to do that! Didn’t even cross my mind,” he laughs.

Making the progression from vaulting the high-jump world record at his first night of training to becoming the national champion has been an enduring and fulfilling journey. One made possible through the love and support from his family.

Winning the title this year was a perfect way to tribute his father’s influence on his life and how much he loved him.

Colin was a huge supporter of Joel’s, never overcrowding his son but always the first to pat him on the back and lend a hand when required.

“I know he would have been really proud of what I did but it was a shame I wasn’t able to share it with him so there was a few tears out there on the track just with myself,” he says quietly.

Above: Joel and his dad after winning his second national title in 2012, a day before Colin would get his whole right lung removed”

Joel, a newly wed, credits his wife, Beth, and his role as a father to her son as a prominent factor in his end of season revival. The unconditional love and support from them and his mother and three siblings has helped the transition to life without his dad.

Performing at an elite level would not be possible without the support and happiness that his family has given him in the most challenging year of his life.

“I seriously doubt whether I’d be able to pull myself together and really train hard and win these sorts of competitions if I didn’t have them around,” says Joel.

With a strong background in gymnastics Joel has always been an adrenaline junkie. He enjoys the challenge of doing jumps, flips and stunts to test the limits of his body, just for fun.

He has a series of popular videos on YouTube called ‘Joel’s crazy tricks’ that show him diving from cliffs, being dragged through fields by a car and many more dangerous acrobatics.

As we have seen with the problems facing our Olympic champion Steve Hooker, pole-vault is a dangerous and intimidating event that requires as much mental as physical strength.

There is no doubt that Joel’s appetite for dangerous stunts is a prominent factor in his ability to vault at these heights given he is not as tall or as fast as a lot of his competitors.

As a gymnast there are not too many injuries Joel is yet to experience. Knees, feet, ankles and shoulders have all been torn twisted or broken at some stage.

“You need that superman mentality,” he says.

“You need to be able to put those things behind you and go, ‘stuff it I’m just gonna run down and do it!’”

Ironically, Joel works as a physiotherapist with Back in Motion Health Group providing treatment for employees in the workplace. He counts himself lucky that he has a job that gives him the flexibility he needs as an elite athlete.

He is a calm and thoughtful person who attributes his strong-mindedness to his Christian faith, which has given him a clear perspective on his father’s death.

“Faith in Jesus is the central reason for how I live my life. I can really be thankful for the life he did live and his influence on me,” he says assuringly.

Sitting on the plane to Sydney Joel had a short list of technical objectives he needed to accomplish to defend his title.

Once these objectives were executed and the gold medal was his he only had one thing left to do. Think about his dad.

To think about all the great times shared at the track or in the gym. The memorable family holidays at the beach and all those intimate father-son moments that will be cherished forever.

Joel will get his chance to jump higher than he ever has before sooner than he thought. His strong display in Sydney has led to an invitation to a meet in South Korea this month where he is confident of jumping high.

“It hasn’t been a stock standard season that’s for sure.”