Home Features The Highs and Lows of Altitude: By Jess Trengove 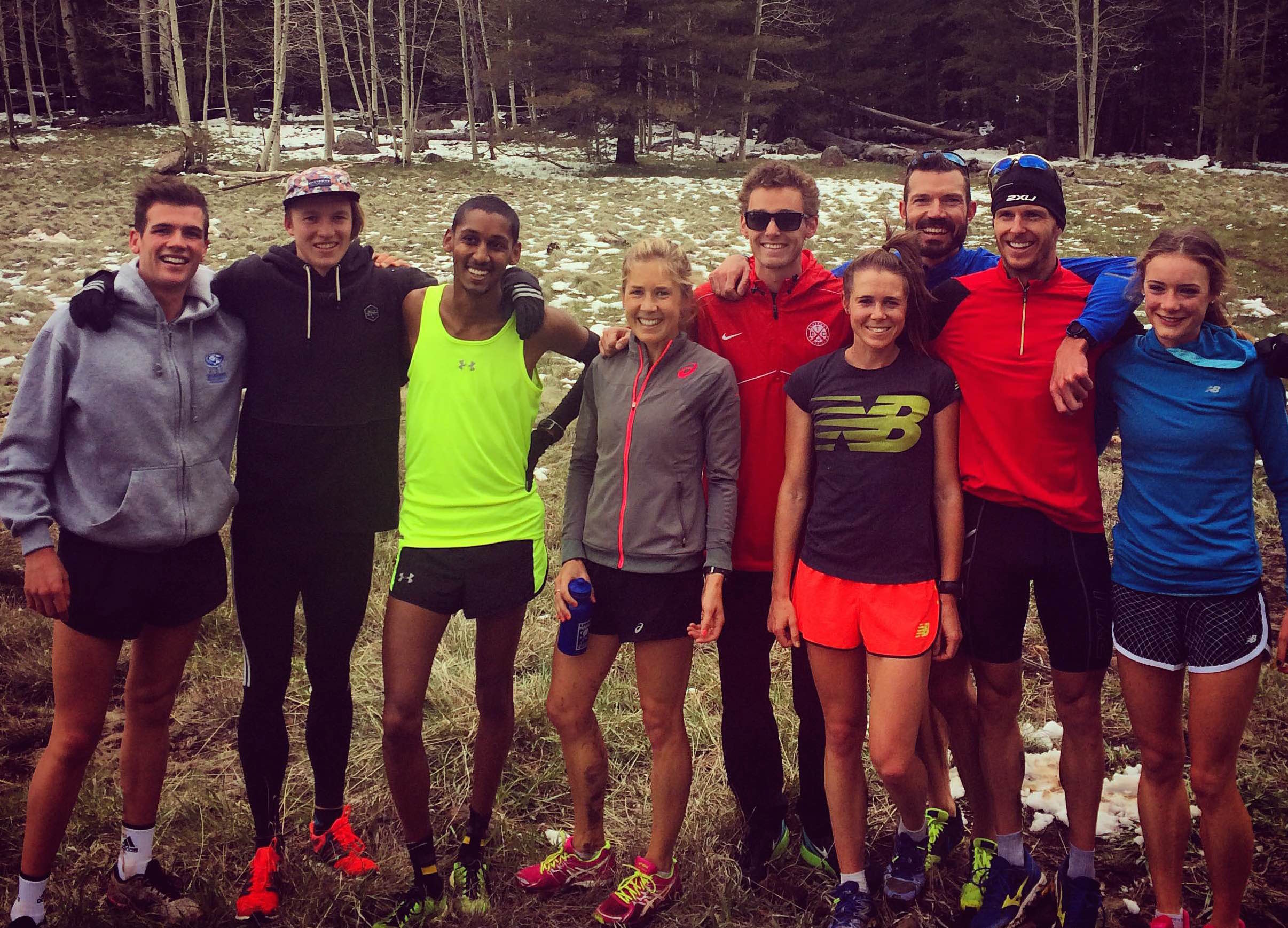 At 2,100-2,700m above sea level, there is a noticeable change in what can be managed and sustained in training. Whilst many athletes talk about undertaking a block of altitude training to improve performance, it can also have the opposite effect. Individuals respond in different ways and certain factors, such as hydration, stored iron levels, energy input and training load need to be monitored to promote a favourable response. I had been to Falls Creek for periods of up to three weeks prior to the Flagstaff camp and didn’t acknowledge how much of a difference the extra 1,000m would make on how I would feel on a daily basis and in training.

Day one involved flying into Phoenix, hiring cars and setting off on the 3 hour journey to Flagstaff… on the right-hand side of the road. It felt anything but right initially but Josh Ralph (Ralphy’s) frequent reminders when I started “drifting” were very helpful. After a quick Mexican feed at Chiles, we navigated our way up the long winding driveway towards our home-to-be on the mountain face of Arizona’s white-capped snow bowl. The wooden house stood lonely amongst tall pines in the cold, dark woods. First impressions sent chills down the spines of myself, Ralphy and Michael Roeger (Roegs) in the car ahead but within a few days it felt like home.

By morning, the house was bustling with a full contingent of athletes, coaches, physiotherapist (Aidan Rich) and Philo’s family – twelve people at that stage. My first ‘easy’ thirty-minute jog from our house in the woods was a rude awakening and a reminder to respect the effect of altitude. With a few minutes left on the run I started seeing stars and took the quickest route to the couch. Whilst the next fifteen minutes of fuzzy vision had me questioning how I would get any quality work done on the mountain, fortunately it was a once-off episode. Another notable response to the thin air in Flagstaff was my thudding heart at night. It clearly had an effect on the chip packets too, which looked ready to explode on the shelves in Safeway.

We were fortunate to have the expertise and guidance of Exercise Physiologist and middle-distance runner, Dr. Philo Saunders literally at our fingertips throughout the entire camp. On day one, we headed to the Hypo2 Lab for base-line data collection. The Guernseys of two AFL clubs and a flag signed by Australian cyclists took pride of the place on the wall beside the Lab’s motto, “We turn thin air into gold!” Testing involved measuring haemoglobin mass (through a couple of finger pricks) and running at a submaximal speed on the treadmill to gauge running economy. Hydration levels were monitored on a routine basis via the glamorous urine sample method and iron supplementation was recommended to cater for the body’s additional iron demands in less-oxygenated air.

One of my friends, Kelly Hetherington had arrived in Flagstaff from Melbourne a few days earlier, and was staying with two local professional runners. Philo and the local athletes were quick to educate us on what to expect in early sessions at this altitude. Longer recovery times may be necessary and it would be reasonable to expect times that were 8-15 seconds slower per kilometer in long repetition, fartlek or tempo workouts. Consequently I was able to adjust session expectations with my Adelaide-based coach (Adam Didyk) and avoid feeling deflated or alternatively, cooking myself in week one. I was grateful that Adam was able to keep an eye on my Garmin data, heart rate output and self-monitoring feedback online during the camp.

It didn’t take long for us all to notice an increase in hunger and for some of us earlier wake-ups in Flagstaff. This was likely due to a higher resting metabolic rate resulting from a higher heart rate and the early starts may also have been a result of it getting light earlier. The daily routine in Flagstaff involved a small breakfast or snack upon waking, such as oats or some toast with banana, followed by a jog or a key training session at often 9.30am. Following the session I would have a protein powder drink and a carbohydrate-based snack. Typically, Australian runners enjoy a good post-session coffee and sit – we lived up to this reputation. Business at Flagstaff’s local cafes, particularly Macy’s and Late for the Train would have hit a high in May with up to sixteen Australians bowling in on a daily basis. An early lunch at the café or a home-prepared feast was most often consumed at midday, followed by another small meal in the afternoon prior to the “arvo” session. The term “arvo” was questioned often by the Americans and “brekkie” was laughed at. Meal times could have been chaotic with fifteen people living in the household by the end of week two but somehow the system worked. In pairs, we had the responsibility of preparing a meal on a weekly roster, which like most things became quite competitive. The fridge was at the point where a punnet of berries, a jar or a packet of cheese landed on the floor without fail when the door was opened but we got by with minimal cursing.

Snow on a couple of days was a little inconvenient from a training perspective but a big novelty at the same time. Snow ball fights, initiated by Philo on most occasions and snowman-production were just some of the perks. Fortunately both snow-days were Fridays, which was a relative rest day for most of the runners. We were privileged to have gym and pool access throughout the camp so that everybody was able to carry out his or her usual routine. It was interesting to observe the variety of programs and forms of cross training between runners with different specialty events.

Whilst in Arizona, a few nearby destinations were too tempting not to visit. A day trip to the Grand Canyon was a highlight and we were all blown away by the enormity and colour of the rocky Wonder of the World. On the day before I left, the group decided to head down the mountain for a track session in Sedona! We drove the cars 45 minutes down the mountain to this unique town set amongst salmon-pink rock formations and lush greenery. The “Red Rock High School” track surroundings were incredibly picturesque and by midday Deon’s coach, Mike was ready to move there.

My first race off the mountain was a half marathon in San Diego on Sunday morning, May 31st. I left on the Friday morning and it was hard to say goodbye to the group, who would be departing to their respective race destinations throughout the following week. Whilst sessions had been very physically and mentally demanding at times, I felt as though I had backed off enough in the final week to have fresh legs for race day. The sound of my phone alarm at 4.30am in the Westin Hotel, Gaslamp came around very quickly. The San Diego Rock ‘n’ Roll half marathon, a concept which has spread to other locations throughout the US, was in full flight. With Rock and Roll bands scattered across the 13-mile course and no shortage of decorated spectators and cheerleaders, the atmosphere was fantastic.

The main difference I noticed in how I felt during the race was a sense of ease uphill, which I can only assume was a result of the altitude training. There were plenty of beverages offered on course and I laughed to myself when an enthusiastic woman in a fluorescent vest held out a cup shouting “carb load” with about 1 mile to go. Shortly before I went to sweep it out of her hand (thinking it would have contained Gatorade or something of the like) she remarked “beer”… I decided to decline! The final straight was buzzing and I was very pleased to finish the race with a new personal best time and a second placing.

I am looking forward to watching fellow Australians race over the coming months and hope that all of the hard work in Flagstaff pays off. Opportunities like this are made possible because of the generous support of friends, family, coaches, training partners, sponsors, Athletics Australia and the local Sporting Institutes. Thanks again to everyone in Australia and also those who were in Flagstaff for the support.