Home Features Steven Solomon Blog: ‘The first year All Schools to All Schools’ 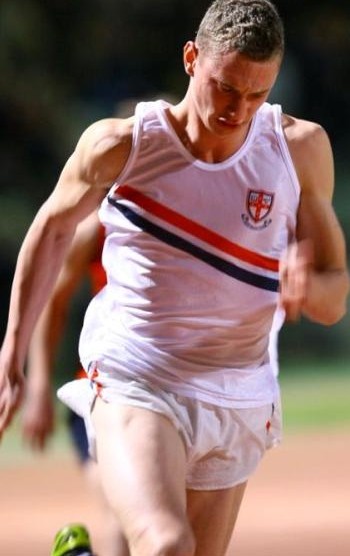 It’s hard to believe that merely one year ago, I decided to pursue the sport of athletics full time. Prior, my life revolved around football (soccer) and to some degree it still does. I’ve decided to base my first blog around the past year, a time in which has sparked my athletics career.

It was just over one year ago that I began training like an athlete. Previous to this, I had participated six weeks a year with school training in addition to five soccer trainings per week. Since, I have re-evaluated my perception of training. No longer do I classify training a quick ninety-minute session consisting of four two hundreds at twenty-seven seconds each with full recovery. Training now involves four sessions per week, including three track and pilates.

A question I’m asked often by many is “how did you start training seriously…what/who prompted such a decision?”
The answer lies within many constituents. I’ve always enjoyed athletics and have been participating through school state carnivals since I was in year five. Upon moving to high school, I received my first formal training as to speak. It is through this connection that I met one of my current training partner’s, James Roff. James steadily evaluated my progression throughout the first few years of high school, and in 2009 insisted that I run at the NSW All School Championships and explore my ability further.

To that date, I’d never made it through the heats in a state carnival, so when I qualified for the final in the 400m, needless to say I was pretty excited. Having only raced over the distance a handful of times prior to the final, my knowledge of how to run the ‘ideal’ race was limited. Never alas, I ran as hard as I could, driven by the prospect of my first gold medal. The thought lingered in my head throughout the race and became ever more prominent in the last hundred when the lactic acid was at its peak.

Winning the race bought about an intrinsic feeling, which an individual can’t describe through words. However, from that point, I instantly knew I was going to continue with the sport.

It was about time to get a full time coach. James’s stint at Cranbrook had come to an end for the year, and I needed some coaching if I were to have any chance against the best in the country at my first Australian All Schools Championships. I was extremely fortunate to be accepted in “Team Fira”. I reiterate the TEAM part, as it really is a team apposed to a group or squad.

The next few months saw my training improve, but more so than anything it was my knowledge of the sport in which proved most valuable in the short term. Fira’s extensive knowledge and the team’s constant support and encouragement played a protagonist role in helping me achieve my first national gold medal. Filled with delight and ore about what I had achieved so far, I returned to Sydney with a desire and determination to continue to succeed in the sport.

Upon arrival home, I began training three times a week with the team. The next major championship was the U20 national competition in March, and I set my sights on achieving a WJ qualifier for either the 400m or the 400m hurdles. Having run a 48.58 to win in Hobart and at the time, having a PB of 48.39 set at the NSW All Schools (400m) and 53.70 for the 400m hurdles, I needed to improve in order to meet the qualifying standards of 47.30 and 52.50 respectively. Training intensified and I began to experience how my life would be for the next few months. Catching two trains to and from training and a bus home, my time became of the essence. In addition to this, schoolwork had to remain up to date as my academic successes remained a high priority.

Leading up the nationals, my body was getting physically stronger. Training was going great and my times were steadily improving. Running a few warm up meets such as the Hunter Track Classic and local club meets taught me invaluable lessons, which came to prove pivotal at the national carnival. Experimenting with how to run different parts of the race, the Hunter meet saw me explode out of the blocks and run a very quick first 200m. This came back to bite me as I ‘blew up’ in the last hundred as I entered lactic city.

Nationals were finally on the horizon and my last race was NSW State Championships. Running a 48.08 in the final gave me a lot of confidence, yet I was still dazed about the thought of running 47.30.

Nationals arrived and my body was in peak condition. In order to stand a chance of gaining selection in the World Junior Championships, I competed in the U20 age group apposed to the U18. Knowing that I was up against much older, faster and more experienced competitors, I knew that I had to run the heat at maximal effort to make the final. Drawing the quickest of the heats, I crossed the line in second (behind eventual world junior team mate Kuey Diew) with a new PB of 47.78. I was excited and felt I was in a strong position for the final.
The final saw me place third behind Alex Jorden (from New Zealand) and Joel Bee. I ran a new PB of 47.77 and was proud of my efforts taking into consideration my participation in the 400m hurdles event. Two personal bests in as many days, the times were bound to keep improving.
A few weeks after nationals I received the best phone call of my life to date. Having been told that I had been selected for the 4x400m relay team for Australia to compete at the World Junior Championships in Canada left me flabbergasted. I could not stop smiling and jumping around with excitement for days following.

Leading up to the World Junior Championships, I settled into what was my first form of ‘’base” training. This was a short stint of about 4-5 weeks due to the time barrier of needing to get faster. Between March and July, I ran numerous 400m. I set a new personal best in Brisbane (47.31) and consistently ran mid 47’s right up until the championships. A warm up meet in Richmond, Canada saw me set a new PB of 47.03.