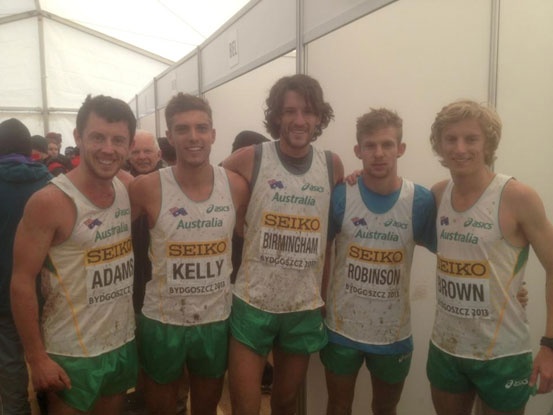 Saucony Love:
Pleased to announce that I resigned with Saucony this past month to embark on my fourth successive year as a Saucony ambassador. Each of those years has been a massive step forward for me and I’m excited to have a crack at some major 2014 goals with their continued support.

Runway:
Earlier this year I started a new training group, Runway. The idea was simple, to support each other as a team and enjoy the benefits of group training. The objective: to then reap those benefits and see ourselves become international athletes, hence Runway.

The squad also acts as a point of contact for junior distance runners post high school. Marcellin College feeds talent through to Runway so they can continue to evolve as athletes. Box Hill AC has also adopted this succession plan as some of the club’s younger open runners have joined us. However this is not a school or club initiative and all are welcome. Runway is coached by John Meagher and myself and is a distance based program. If this sounds like something you’d like to be a part of, even if it’s just jumping in once a week, then definitely Facebook me and we can run through the program in more detail.

World Cross Country:
As the World Cross Country Championships were a while ago now I can’t give an accurate account of the trip or even the race itself except for telling you that it was the greatest experience of my running life. I’ve been fortunate enough to wear the green and gold before but the stage, expectation and talent of WXC’13 was of a different caliber.

The Australian Team provided it’s own talent through Collis Birmingham and Liam Adams. To spend a week in both London and Bydgoszcz with seasoned WXC competitors was not only an experience in itself but also a tutorial on international competition.

Even before Collis had placed eighth in the world I had been following him around for two weeks with an Aths Vic collectors card and a Sharpie. However I never worked up the courage to ask him to sign it as I struggled to draw the line between athlete and fanboy … not to leave empty handed I went on to take his spikes post race, 15mm needles in tact and all.

As this has been a fairly vague recollection of WXC I’d like to close this chapter with my clearest memory of the Championships:

On the start line each country is designated a pen (like the livestock we are), given the size athletes line up in twos. Having finished first and second at the trials the Ballarat Project boys formed our frontline. Next was Liam as he’s a mainstay to World XC and a vacant spot. I motioned for Mitch to line up opposite his Essendon teammate however he didn’t stand there for one second, instead ushering me into the second row. That gesture is the best way I can sum up the camaraderie amongst not just the senior men but also the Australian Team as a whole. Our fellowship extended beyond team results, wanting the best for each other on an individual level.

No more than an hour after the race, still in my kit and getting rocked by snowballs I emailed Box Hill President, Chris O’Connor. He received an incoherent paragraph (not unlike this blog) in which I expressed by desire to anchor every relay of the upcoming season, a responsibility I had never held.
XCR’13:
Upon returning from the World Cross Country Championships and signing up at Box Hill AC for the domestic season, I held the weight of my own expectations. After being selected for my first major championship it was important for me to have an impressive season to justify that selection, and the honour of wearing an Australian singlet.

As the opening rounds were relays at Jells Park and Sandown Racecourse, athletes were given time to hone their craft prior to the individual races. Through failing to post a top five individual split at either of these events, I had slipped back under the radar yet my expectations remained, hell they grew!

Ballarat opened the season hosting the 15km Road Championship as athletes lined up for the first individual points on offer. I viewed it as pivotal to leave the Moneghetti Trail with line honours and start XCR’13 in a positive way.

After narrowly escaping Ballarat with the 11 points, my race confidence and hunger carried over to Brimbank Park for Round 4. More than just Heritage Round, Brimbank plays host to something I’ve been after for years, the Victorian 10 Mile Championship.

With other names pursuing the Gold Coast Marathon, my dream was realised as I held a trophy once attained by Harry Summers and Liam Adams. Another small goal came to fruition this season in winning the Victorian Cross Country Championship at Bundoora Park.

For anyone with a good memory, I held this title once before, but only on paper. That year, despite crossing first, Liam forgot his timing chip and was disqualified. Given the chance to challenge him again over the hilly course, I wanted to be more than a paper champion. To make the day a little more special, I had my dad and brother there whom I haven’t allowed attend a race since the Zatopek double lapping of 2011.

Entering the business end of the season, I dropped my first race to Mitch Brown at Albert Park who also went on to win Lardner Park and even the National Cross Country Championship! I definitely admire his patient approach to the season, always aware of his own training and never losing sight of his bigger picture.

The Burnley Half Marathon always closes the individual season and I had done the maths on what was required of me to leave with my third XCR Premiership. As the end drew near, I found myself fortunate enough to win the day and the season. A mere 7 seconds later, I had the opportunity to shake Mitch’s hand and close the cross-country season we both started in January.

The culmination of the Division 1 Premiership hunt was held this past Saturday at The Tan and our six man team was a great mix of young and old. As the premiership was already wrapped up it was important to win the day so we could celebrate our season post race. Daniel Clark opened up for us running a 20sec PB and tagged Steve Dinneen close to the race leaders. Relatively new to Div 1, Will Potter and Michael Dowell held us in good stead through the middle legs. Running fifth and putting us in the lead was my training partner Anthony Aloisio. As a testament to the effort of these runners there was little to no pressure on me as last leg. Thank you for being a supportive team throughout the winter, that isn’t exclusive to the Div 1 boys, our depth as a club is incredible. Thank you all.