Home Features Steve Kelly RT Journal: If you’re XC and you know it 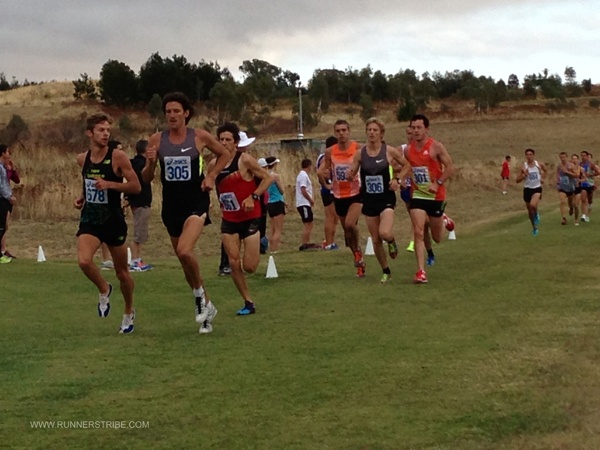 This is my first blog for Runner’s Tribe and I hope you all enjoy it. Far from my life story, here are some quick opinions and anecdotes …

Being a hatchet:
My former school teacher, long time coach and good mate Johnny Meagher is great with an analogy. He described his nephew Daniel Clark as an axe and myself as a hatched. Of course this initially seemed unfair but as the analogy took shape it was perfectly justified. He explained how Clarky can win races with one devastating move, a trait which has lead him to four Victorian Championships. John then looked at me as I awaited my awesome new nickname, “And Steve … you’re a Hatchet”. You’re obviously at a computer now so take a sec to Google ‘hatchet’, looks nothing like me. However as the explanation followed I could see that I was indeed a hatchet. I’m not breaking open races with one swift move nor winning them with a monster kick. I was made aware that my only weapon is to chip away at my competitors and ensure cracks appear in the later stages, a technique which recently lead me to my first Victorian Championship.

… but seriously I’m at least a tomahawk.

With John’s words never far from my mind I’ve also applied this metaphor to careers, the young axes that burst on the scene and the hatchets that have to earn every place. Again I fall in the hatchet category, always eclipsed as a junior and so often in the minor places as a senior. I recall making the transition from underage to open and feeling like a boy amongst men, it’s only now that I find myself competitive with the top runners, forever trying to shed my hatchet gimmick.

There are some awesome meets throughout the domestic season for middle distance running but if the 10000m is what you’re after then there’s only one, the Zatopek Classic! Months of work put to the test on one magical night.

Still haunted by my 2011 effort, or lack of, my eyes were fixed on the following Zatopek a year out. Every Monday my second 10km became 25 laps of Kew’s beautiful grass track, learning how to be patient and buffer out any sleeper laps.

And so the night came, my fourth consecutive Zatopek, yet another chance. My newly acquired patience guided me through the first half before some major sleeper laps crept in, at one stage dropping six places in a mere 400m. Thankfully the wheels didn’t completely fall off and I was spared the pain of Zatopeks past, crossing the line in 28:52.

With so much time and hard work put into just one race having a good or bad run will determine your psyche for the months that follow, it’s the Zatopek effect. With a sub 29min 10000m behind me I was experiencing more than positive thoughts about the up coming World Cross Country Trials.

If you’re XC and you know it:

With the World XC Trials fast approaching I was forced to call it a day on my track season after an 8:01 3000m PB at the Victorian Milers Club in late December. However for a race with all the sway of the XC Trials I was more than happy to get my cross on.
Walking the course at Canberra’s Stromlo Forest Park the night before I had vivid flashbacks to missing out on the Australian Team two years prior and a lousy National Cross just last year. Fair to say the well kept loops of Stromlo have delivered me nothing but heartache, however still walking tall with my Z:10 confidence I was ready to chase a green and gold singlet. In such a small yet elite field there was no need to count places in the early going, top three are honoured with an automatic Australian singlet, the following three are at the selectors discretion. Going through half way the race broke into those exact numbers as Collis Birmingham, Brett Robinson and Liam Adams had dropped Ben Moreau, Mitch Brown and myself. Knowing my previous winter wouldn’t stand the test of the selectors discretion I started the long effort of pursuing a top three finish, a move which saw me running 6km by myself only to hold my forth position. With the honour of wearing an Australian singlet now out of my hands I awaited a phone call from Athletics Australia. After an anxious week of being a jerk to everyone the call finally came, more than a call actually, it was the call up!

Honoured with National representation I’d like to thank Tim O’Shaughnessy for investing two Ekidens in me, Collis for recommending that AA select a full team and obviously the Box Hill / Marcellin boys past and present, all lead by John Meagher.

Shameless Self Promotion:
After recently completing my studies in massage therapy I’ve now opened up my home studio, check out the Facebook page for information and appointments.
http://www.facebook.com/Personal.Best.Massage