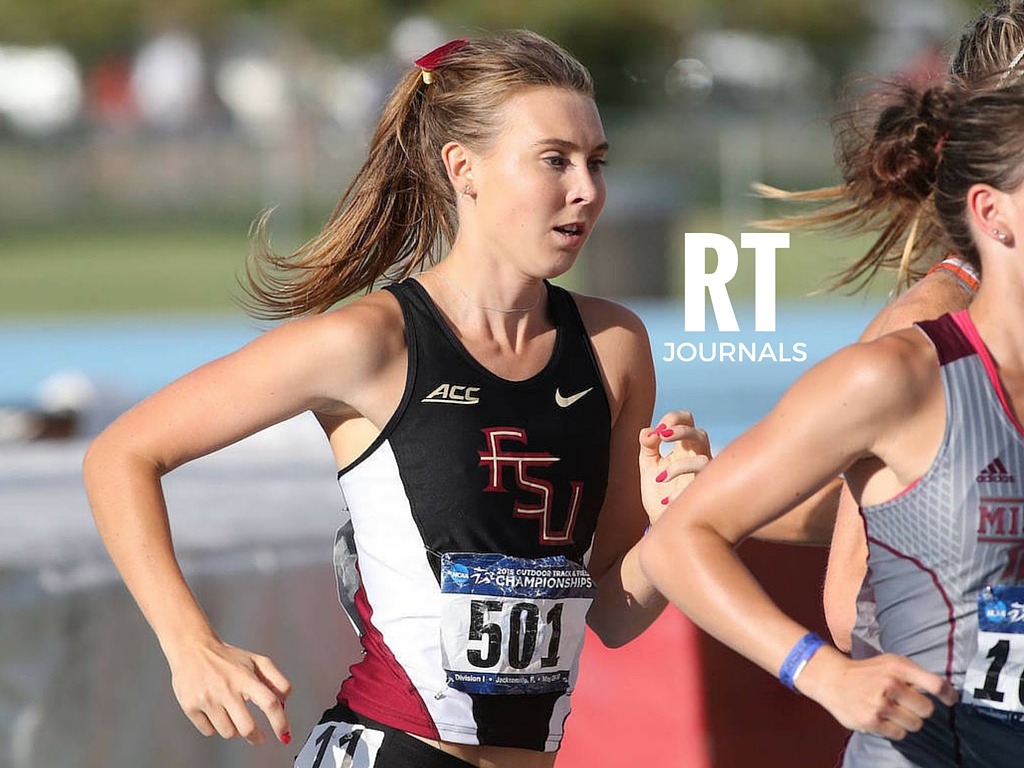 Saying goodbye to the NCAA | RT Journal by Linden Hall

Standing on the starting line for the 2015 NCAA Championship 1500m final, it was hard not to dwell on it being my last race as a Florida State Seminole. An amazing journey, that until this point I hadn’t realised I wasn’t ready for it to be over. It was the fear of it all ending that saved my season and drove my run to a third consecutive NCAA 1500m final. At NCAA regionals (qualifying meet for NCAA Championships) I wasn’t ready for the end, so I ran as fast as I could to just keep it alive a little longer. At the NCAA Championships I snuck through the heats and survived another day, I still wasn’t ready. But starring down the back straight of Hayward Field for the final really was the end, and I couldn’t run my way out of it this time. Just over 4 minutes later, it was all over.

Leading up to the NCAA Championships and our last time running for Florida State (FSU), my teammate Colleen and I nearly drove others insane as we commemorated each ‘last.’ The last workout, the last run at each trail, the last weights session, the last ride in the team van, the last ice bath, etc – and of course there was always an accompanying Instagram post.

For me, finishing college was a classic case of “you don’t know what you’ve got ‘til it’s gone.” After four years living in the bubble of collegiate athletics, it popped with a bigger shock then I was anticipating. ‘And a big yellow taxi (Qantas plane), took my girl (FSU) away.’

Back on Aussie soil, many of the luxuries I had come to expect were no longer a ‘thing’ and I quickly realised we were far too spoilt at Florida State.

Like what do you mean I don’t have a group of speedy girls to run with at 3pm everyday? And no one is going to drive me to a trail? Oh and I have to buy my own shoes!? This is madness.

If you had told me a year ago I would miss America this much, I probably would have pushed you in a bush and called you crazy. Jokes on me now I guess.

Settling back into Melbourne life was more challenging than I’d anticipated, I found the biggest hurdle to be the absence of the social support and structure to my training; the team environment in the NCAA is unmatchable. This definitely wasn’t something I was expecting when I headed over to the states. The team was enough to (almost) make me enjoy cross-country, which I usually enjoy as much as American coffee (which basically tastes like socks to a Melbournian). Our Seminole family has a special bond, when I try and explain it to anyone outside the team it basically ends up in a really long one-sided conversation of stories that makes no sense unless you were there. In the end I typically end up showing them a video of our team chant ‘the rock,’ I think it sums up our team’s love and passion quite nicely. So for you lucky folks I’ll skip the stories and go straight to the video.

I don’t think I realised how much I missed this team culture until one cold winter night at the Tan last year. I was half way through my last ‘K’ rep and happened to be wearing an FSU singlet, when a jogger yelled out ‘Go Noles (short for Seminoles)’ and gave me ‘the chop (FSU team cheer).’ Magically, this final rep went from a struggle to the fastest of the session. By the way, if someone could do that in the last lap at nationals, that would be great.

So many athletes come back home after a stint in the NCAA feeling pretty lost, from the get-go I was determined to have a plan and seamlessly merge back into Melbourne life when the time came. However, it didn’t happen quite as fluidly as I’d envisioned.

I’d carefully planned my academics and had already been accepted into the Monash University Master of Dietetics program. So I was locked in to being very busy for the next two years, surely that would distract me enough and I’d forget all about the far away lands of America.

Next, I needed a new coach and training group. This was something that had been in the back of my mind for a while, but it seemed too hard so I just keep ignoring it and hoped that someone would decide for me. But no one did, and I finally (with a lot of input from anyone who has ever had anything to do with my running career – thanks guys) decided on Bruce Scriven’s ‘Wolfpack.’ The decision was worth the wait, I love going to training every session day. The squad has a great atmosphere, and everyone is really supportive and encouraging of one another. And best of all, we go for coffee before every session. While we could use a few more girls, I almost always have a small army of boys to get me through my sessions many of who are more than happy to help set the pace and work with me.

As these things have slowly come together and I’ve settled into my new training group and uni course, they’ve progressively become the norm. I’d like to think I’m starting to tell less stories that open with ‘this one time, at FSU…”

While I couldn’t be happier to be back in Melbourne with my family and friends sipping on flat whites, if I could do the whole college thing again I’d jump right on the next plane. I’ve been asked so many times ‘oh you’ve been in America, how was it?’ that I’ve now have a beautifully succinct answer prepared for you. It was the most amazing four years, and I would go again if I could. It’s an experience you can only find in US college athletics, that you almost have to be a part of to believe. It’s about as close as you can get to living like a professional athlete without actually being one. But mostly (without sounding too corny), it’s the people I met and the places we went and the memories we made. Overall, I couldn’t be happier with my decision to attend Florida State, for me it was the perfect fit. I left Australia as a 4:23 1500m runner and returned with 4:10 next to my name, but I also learnt so much about the tactics of racing and became so much more professional in my approach to running. I feel that my time in the NCAA was a perfect intermediate between my junior years in Australia to hopefully becoming a top senior athlete over the coming years. I’m excited to find out what’s ahead and how far this running adventure can take me!

RT Found this cool video footage from 2014 after Linden finished 3rd in the 1500m at the NCAA Outdoor Track & Field Championships.