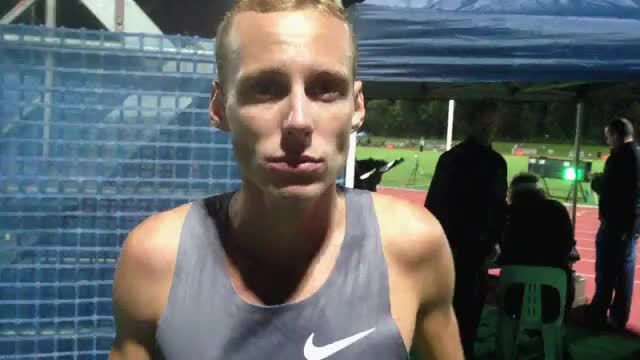 The 2011 athletics season has finished and it’s been an interesting one to say the least. In a season that promised so much at the beginning it was unfortunate that it all unravelled not long after.

After completing a solid training block with the Melbourne Track Club boys in Mt. Laguna, California in May, I headed to Eugene, Oregon for the Prefontaine Classic. I was entered in the ‘B’ mile as it was my first race back from a long lay-off through injury. It was a race which I had won the year before so it was a good place to start things off. I ended up getting the win again but it wasn’t as smooth as last year. I still won comfortably at the end but I could tell that I hadn’t raced in awhile. My rhythm was all over the shop and tactically I think I made every wrong move in the book. It was still a win over a decent field but not very satisfying.

From there I travelled to London to compete around Europe. I ran a 3000m PB of 7:49 in Strasbourg, France but after the race I pulled up with sore feet so I took a week or so off running. I’d been to hell and back with foot issues in the past so I wasn’t going to take any chances. When the pain went away I started up again to prepare for a 1500m in Sollentuna, Sweden. After a slower than expected beginning to this race I took the lead with 500m to go to inject some pace and try have a shot at the Olympic qualifying standard. I ended up running 3:36 and was pipped on the line by Kombich from Kenya.

In the next week of training I set off for an easy hour run and at the halfway point I felt a grab in my calf. I stopped and stretched it out and it went away. In the last minute of the run it was back and I was a little worried. I saw a physio and massage therapist and they thought that due to there being no swelling or bruising it was just a cramp and it’d be all good with some stretching and massage. I then went for a run 2 days later and my calf felt tight but manageable until I felt a massive grab and I knew I was gone. I was on my own and had to hobble about 45 minutes to get home and straight away my coach planned for me to go to Ireland for treatment and to sort the issue out. I was off to see Gerard Hartmann who is one of the world’s most renowned physical therapists, treating the likes of Usain Bolt, Lance Armstrong, Steve Ovett, Paula Radcliffe and Sonia O’Sullivan. I rested for a week before I got to Ireland which allowed the muscle to repair itself. When I saw Gerard, it only took him about 5 minutes to realise that I needed orthotics. ( I’d been in orthotics in the past but was taken out of them by a specialist who didn’t think I needed them.) Gerard sent me straight away to Belgium to see the the world leaders in orthotics. After a long series of tests they designed a couple of sets of orthotics for me. By this time, (which was 2 weeks since straining my calf), my calf felt fine and with the new orthotics I was ready to run again with hopefully the problem solved.

I started running a few days before some planned races in Monaco and Stockholm. In ideal circumstances I wouldn’t have raced as I hadn’t run for 2 weeks but I was still yet to attain the ‘A’ standard for the World Championships so I had no choice but to toe the line. I was terrible in both races, running 3:51 in Monaco. This was where I broke the Australian record by running 3:31 the year before.

In the end I was selected for the World Championships in Daegu, South Korea. In the weeks prior to the World Champs I tried my best to get some good running in my legs and I paced my training partners, Collis Birmingham and Ben St. Lawrence in a 5000m in Lappeenranta, Finland. In Daegu I bunked in with my standard room mate Fabrice Lapierre but unfortunately within a couple of days I started to get a pain in my foot. The doctor and physio said that it seemed that the attachment of the tibialis posterior and navicular was inflamed. I got some work done and had it taped and I was still able to run with only a little bit of pain.

To make matters worse, a couple of days after this I got struck down by a rough bout of gastro where blood was coming out of all different places… I was unlucky to get it as I was the only one in the team who got sick. I was in a bad way for a few days after because every time I tried to run my kidneys would ache so much due to dehydration that I would have to crawl into the foetal position after 5 minutes of continuous running. Luckily my races only went for 3 and a half minutes!

In the first round I was hoping for a really slow race as I didn’t have a great deal of energy and I thought my best chance of qualifying was in a scrap over the last 300m. In the end the race was the fastest of the 3 heats and I was able to advance on times.

In the semi, my plan was to just try and keep up for as long as I could. I ended up doing a pretty good job with what I had and wasn’t too far away at the finish. It gave me the confidence that if I could get close when I had a rough build up, I will be a good chance under better circumstances.

After the World Champs I was scheduled to have a few more races. The first one was in Rieti, Italy. Personally I think it’s the best meet on the calendar. It’s run by an Australian, Brian Roe and I love how it’s in a small town, the weather is great, and it’s at the end of the season where everyone is relaxed. I did the 1500m there and kept up for a couple of laps before I’m blew up in a big way. I didn’t have much running in my legs and had lost a lot of fitness over the previous couple of months. Also my foot pain was much worse after this race so I obviously had to call an end to my season then and there.

I then went and saw a doctor in London and got a scan to check out my foot. The results were good with no stress fracture but I had some fluid in the bone which they say was a stress reaction of the navicular. Now I had to figure out why it happened again. This wasn’t as severe as the navicular stress fracture that ruled me out of the Commonwealth Games but it was in the same area and the only reason why it didn’t lead to one was because I caught it early.

I headed back to Ireland to visit Hartmann International. Gerard Hartmann was away but I was able to spend a few days with his business partner, Ger Keane. Ger got me to do a few exercises to see where my strength was at. I’m someone who has always done strength work but I guess I’ve done the wrong ones and in the wrong way. Ger said that I should have been much better in certain strength areas and because I was so weak it therefore made my hips collapse, then my knees, which then has a knock on effect on the lower chain where I already have so many issues. I worked with Ger over the next few days to loosen up my whole body and he took me through the new strength program that will hopefully rid me of my injuries.

I returned home and had a little rest period before I started to do some cross training before recommencing my running again. I wanted to cross train hard so that when I did get back I’d have some good general fitness behind me. Unfortunately I went too hard too soon on the bike and pulled my tibailis anterior muscle (front lower leg, next to shin). Who would have thought I could injure myself while cross training due to another injury, and on a stationary bike!

Anyway, I’m writing sitting on the train on the way back from Sydney. I’ve just had a cortizone injection to hopefully speed the recovery process up so I can begin running again and have a crack at the London Olympics.

I’m really looking forward to competing during the Australian season. I missed this last year due to my injuries so I can’t wait to toe the line on my home turf.

It’s been a rough past 15 months but I’m as hungry as ever and I know that with a good patch of training and a bit of luck I can do some damage.