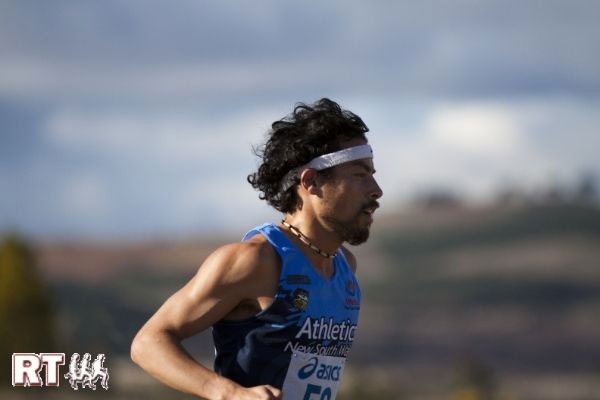 Hello Runner’s Tribers! It’s been a few moons since my last bloggage eh? Not to say that nothing has been happening worthy of mention, but I still hold pretty high expectations of my running, so I guess I’m probably being pretty harsh on the results this year – and consequently the self-imposed radio silence. Although, that said, I was pretty chuffed with the recent 7th place at National Cross in Launceston. My first top ten in a few years, and to be up there still dicing with the young pups keeps the fire in the belly.

Speaking of fire in the belly, the past two months since Nationals has definitely been a test of the aforementioned combustion of materials in the gastric region. I picked up a random Achilles injury the weekend before Nationals, and have since spent my time doing the old two steps forward, one step backward (or in a runner’s case, two strides forward, one stride backward). At the time of Nationals the niggle didn’t seem bad enough to warrant pulling out of the race, and in the end I was glad I didn’t because I ran pretty well. But the next morning when Brad “Yugi” Milosevic and I dragged our seedy post-after-party arses down to the spectacular Launie Gorge at 7 in the morning, it was all I could do to hobble as quickly as I could through the fog after my NSW team mate.

I think the main downfall occurred the week after Nationals. My former coach, Greenie, always used to get us to take the week off post National Cross, as it was acknowledged as a tough run on the bones, and decent recovery was vital. But since those sensible days, I have developed a new headlong approach to training, so I (foolishly, it would now seem) decided to continue training as normal for the remainder of the week after taking the Monday off. By the following Saturday the Achilles was gooooone, and that was me done for a few weeks. I was then back at work doing the casual teacher thang and limping around like I’d run barefoot through a bindi-eye patch – the students were most concerned for me, as they are used to Mr Dessaix-Chin the fitness freak strutting about the playground with nary a care in the world.

Anyway after two weeks off, the Coach gave the all-clear to resume running, although it was just a jogging around initially and then gradually ramping it up over the next couple of weeks. Then, a few weeks ago, I did a decent 16km on the Friday and a solidish 14km on the Saturday (in about 52min), then took the Sunday off as a precautionary measure. I woke up the Monday morning in more pain than I have had in the foot ever, I think.

So here I am at the desk writing about the frustration of once more being reduced to limping around the school – that Monday morning one of the permanent (and older) teachers took pity on me and offered me his walking stick to use. At first I was like: “No way man, I’m gonna look like a damn fool”. Then I realised I was hobbling around the school like a damn fool already, so I sucked it up and took the walking stick. Actually, I think the bloody thing garnered more attention to the injury than not having it…

At this point in my career with such annoying little niggles pestering my every step, I could take the easy option and throw in the running socks. Get a real job, a wife, a children, a picket fence and a big screen LCD etc. But like I alluded to earlier, the fire is still there in the belly. It ain’t over yet baby!!

I definitely draw inspiration from the evergreen Scotty “The Captain” Westcott, who has not stopped amazing us all with his determination and continuing to pull out proper respectable performances, e.g. his recent Melbourne Marathon. And the way I see it, if Scotty can still do it, so can I.

Recent weeks have been much more positive in the injury stakes. I’ve been to the physio a couple of times and the rehab he has given me seems to be working. Went for a ride this arvo, a cheeky 30k in just over an hour (I used to run 16km in an hour…sniff). The legs are a little stuffed this evening, but it’s a good feeling. Haven’t felt the burn for a long time now, and I’m desiring more!

So to some race results…

After the disaster of Hamburg, it was hard, and not so hard, to get back to Australia and keep up the motivation. I let myself down in so many ways for such a big race and such a big occasion (“The Debut”), and the origins of that balls-up of that was, and still remains a mystery to me. Anyone know a good sports psych?

But seeing as the Hamburg race ended up a bit of a “jog”, the infamous marathon after-effects weren’t so pronounced as if I had actually had a go in the race (that said, there were some after effects of course! I didn’t off completely scott-free…). This enabled me to get back into the swing of things relatively quickly back at home, once I had let off a little steam.

After a few weeks of cautious training, I lined up back into the racing scene. The first real outing was as a member of the victorious Sydney Uni All-Whites at the NSW Cross Country Relays, a 4km heart starter indeed. There was a decent win in the Gosford Bay to Bay. A 5th placing performance at the NSW Long Course in Nowra. 4th in the Sydney Harbour 10k. Another goddamn disaster in the Goldy Half – but I nearly lost a hammie in that one, so I guess that was out of my control. But I did bounce back in time for that top ten in Tassie. Tassie was almost a catastrophe too; I somehow neglected to pack the GU Roctanes in my race kit that morning. I really missed them that back half of the race! They have been an integral part of training this year and I just can’t believe I was so unprofessional as to simply forget them. Anyway, since Nationals that’s been it though, it’s been frustration ever since.

Actually though, I have had a pretty good run (no pun intended) over the course (another pun?) of my career. This injury is only a minor setback in the grand scheme of things. It ain’t a stressie, so it’s not going to take months of recovery. I haven’t had enough serious injuries (touch wood) to appreciate how little time this is taking out of my plans. I now also have an appreciation for the mental agony some of those athletes with serious/chronic injuries must endure. So anyway, with a little patience and positive thinking, I hope to get going sometime next month and then start setting up the next marathon tilt. But, even if it means taking another fortnight off (despite the barely used shiny ASICS beckoning from the corner of my room) I will make sure that the damn thing is cleared up for sure this time. The physio, Pricey, in cahoots with the Coach, is running a tight ship and won’t let me run until he is happy. I hope he is happy soon, ‘cos I got itchy feet! And it ain’t tinea.