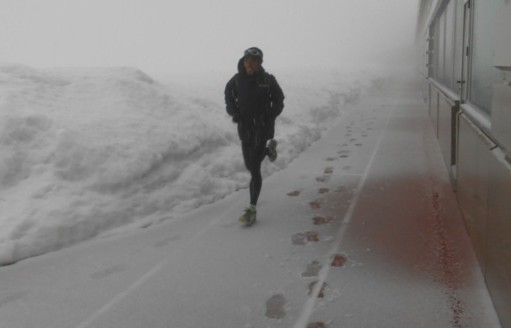 Aaaah. Ross from Runner’s Tribe recently asked me to write another blog…

As I was injured late last year and have spent the past couple of months slowly getting back to fitness, I was at a loss as to what to ramble about. Surely not another blog detailing in fine print the aches, pains and mental anguish of an athlete crawling back from an injury! We (Aussie’s top runners) all seem to be injured in some capacity these days. I have a theory that the best in the world are those who can manage and bounce back from serious injuries with success, whilst a kind of natural selection keeps the rest of the talent on the sidelines, eventually convincing them to quit the sport prematurely (not that I am claiming to be one of the best in the world – although I was #1 in the world for 10,000m in 2005 after winning the NZ Champs late that January. My reign at the top with the scintillating time of 29:40 was short-lived, but I will claim it forever…).

Anyway, at this point it seems inevitable that I will end up writing about my own road to recovery. Why fight it? So here we go. Well it’s been an interesting one. I have always held a secret desire to be a road cyclist. Watching Le Tour over the past decade or so (various doping-related misadventures aside) has been one of the sporting events I really look forward to each year. These guys smash themselves around Europe for three weeks, and whether they are “assisted” or not, they are still doing the work I suppose. Didn’t Lance mention something about a “level playing field”? But, er, I digress. In November I purchased at great expense (not) my first road bike from a mate who runs a bike shop here in the Gong. I started doing some long rides, 50k plus, and even recently joined in with a pretty serious bunch (serious, as in they get going at 5:30am) who ride 80km in a loop around the southern parts of the Illawarra. I did this at the urging of my good mate Ben “Benno” Allen, a pro off-road triathlete who thought I would be up for it. Turns out that my fantasies of being a road cyclist aren’t too unfounded, as I can keep up most times during the ride (except for when they try and race each other – then I’m spat out the back and on my own). I do alright on the climbs though. I’ve always loved running up hills, and it’s not that much different on a bike…so that’s the cycling taken care of.

The other activity I have been doing regularly during rehab is swimming (can anyone guess where I’m heading with this?). This is a much harder thing to get enthused about, and I have developed great respect for our elite swimmers who do this every morning and about three times the distance that I flap around in. Following that black line for half an hour at a time drives me nuts! Added to this the fact that I have the upper body development of a distance runner, i.e. NONE, and it makes for entertaining viewing if you happen to be a bystander at one of my swim sessions. Nonetheless I have been stubbornly dragging my arse down to the local ocean pool three times a week and lapping away for 2km at a time. Really quenches your thirst, salt water. The Coach has come down a couple of times (apparently he dabbled in a bit of swimming coaching as well in the past) to give me some pointers. He reckons I’ve improved heaps in the past couple of months. I reckon the only way off the bottom of the pool was up!

As I alluded to earlier, there is a point to this ramble, and, if you’re still with me, I will now reveal, duh-duh-duh-duhhhhhh that I am going to debut in a triathlon this weekend here in Wollongong called TriTheGong. The Coach and I decided a month or so ago that since I’ve been doing all this training in the other disciplines as well as gradually getting stronger with the running, let’s have a crack at putting them all together and see what happens…

It’s funny, I’ve only been averaging 70 or so km per week of running the past couple of months, about half normal mileage – but I’m feeling almost as fit as ever. Must be something to do with the cross-training. Although, that said, I am sore in muscles that I never knew I had, let alone have ever used before. After the triathlon it will be time to get going with serious marathon training, so exactly just how fit I am will be revealed real quick!

So, anyway, there is something that any injured runner can think about doing whilst rehabbing. If you’re doing a lot of swimming and riding, why not put it all together and take on a triathlon as you gain momentum? You get to maintain a decent level of fitness, and it also gives you a goal to focus on as you climb towards getting your running form back. It also might just satisfy that desire for competition, or even reignite it, meaning that you can hit the ground running once full training starts off again. I know this is what’s happened for me. But before I go any further, to all of you who might be afraid that I’ve been taken in by the Dark Side, never fear – distance running is still my number one, and I can’t wait to get back into it full-time!

I am fortunate to have a very supportive sponsor in ASICS, who have sent me all sorts of triathlon gear in the past week so that I can at the very least look the part (e.g. a sprint suit, elastic laces, race belts, some sort of fluoro green bum bag…). I will also be chomping down on plenty of GU products to keep me going in what will be a race that will take almost as long as the marathon in Hamburg last year (hopefully quicker).

So, what of my chances? I have entered the Open category…which means taking on several of the local pros, and maybe the odd one from outside the area. Well, it’s the great unknown really.

Although, what IS known is that I will probably be the last out of the water – unless I can somehow sneak a hitch off one of the many clubbie boats that supervise the swim. Once the swim is completed then the real race starts, I hope. A strong bike section, then, if my legs are still attached, see if I can take some names on the run…but who cares in the end, it’s gonna be fun no matter what! Best of all, I know that once I finish, the real training starts…yieeeeeew.