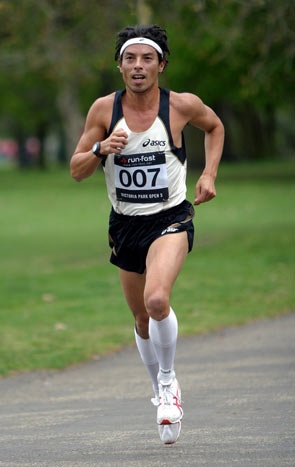 Happy December everybody. I hope this finds you happy and enjoying the fruits of Sping. Yes, there’s that word again…Summer is upon us and it must be time to start gadding about without a shirt on – ah, who am I kidding, most of you know that with me, ‘tis always the season for running sans chemise (That’s French for “without shirt” – go look it up if you don’t believe me).

Training continues to go well, and that was not more exemplified than by the solid result at the Melbourne Half Marathon last month. It was a bit of a spin-out that I got a few congratulations from the community at large…I guess it was a bigger result than I realised at the time, and the attention brought that home for me a couple of days after the race.

But enough dribble – you would like to hear about the race itself yeah…?

The Melbourne Half hadn’t been on the long-term radar, but post-NSW Champs the coach had set me the task of finding a fast half somewhere in Australia during the springtime, and this was the only one I could find. I’d been thinking of doing it for some time, and in fact the Marathon had been of more interest as it had been named as a selection race for the World Championships in Moscow next year. I had been growing steadily in confidence about completing a decent marathon thanks to some epic long runs in recent months, and the qualification time of 2hrs17min seemed (probably naively) to be not too hard an ask. But Graham was a lot more down-to-Earth than me and told me it was 21.1km only at this point in the program.

Talking to Tim Crosbie (Melbourne Marathon race director) the evening before the race, I discovered that I had firmed as one of the favourites, as a couple of guys had dropped out. I also discovered that I was going to be sharing a room for the night with my main rival…Gemechu Woyecha, a naturalised Aussie from Ethiopia and well-credentialed runner. I’d never met him before, though I had raced him plenty of times! Turns out he is a real nice bloke, as most of the top distance runners all around this planet are, as I’ve discovered in my many years of travels. We stayed up late-ish into the night talking about the running scene and Canberra, where he hails from these days.

Race morning was absolutely perfect. Cool, clear skies and nary a breath of wind. There was a little bit of panic just before the start as Gemechu and I got caught up in the crowds heading to the line, but some directions from some randoms got us there in time for the all-important strides. I hadn’t discussed my plans for the race with Gemechu the night before, but I suppose he figured it out pretty quickly after the gun went – when I went to the front and got into the planned pace immediately. He caught up to me swiftly and within a km we were 100m in front of the rest of the race.

The first couple of km was a little swifter than planned – though it’s not a bad thing to be ahead of schedule, because you know you’re probably going to tire later on…so it’s good to have some seconds up your sleeve. Or shorts. For the first 5km Gemechu hung off a few metres back. I was thinking at this point that he was enjoying the ride and could at any minute lazily lope past and leave me behind – but at the same time I was not worried, as I had my own game plan for my race and was going to stick to that no matter what. Anyway, as we ticked off the k’s and still Gemechu didn’t come past, my confidence in being able to stay in the lead grew. As we ran through the Pit Lane of Albert Park Raceway, just before 11km, I put in a bit of a surge, trying to maintain the planned pace and the gap between us suddenly widened. I was now on my own, and had to set sail for home alone.

It was a lonely roll back down St Kilda Road! There were a couple of slower km splits unfortunately, but I still managed a strong finish over the last 3km to record my first time under 66 minutes for a Half, and a 36 second personal best.

Probably the biggest thrill of the day was entering the MCG and completing a lap around it into the finish. I even saw myself on the big screen…I noticed I was dragging my arse and was able to correct the posture so that I looked all cool and stuff crossing the finish line. There was also a bit of further show-boating as I finished, including a smacker on the (puny) biceps for my green Scottangerous armbands.

Well, this race was always going to be an interesting one, with all the long distance training I’ve been doing and speed work that I haven’t. Although, it must be said, I had survived a couple of faster sessions in recent weeks, and this gave me the belief that I would be in the mix up the front.

I was put in the A-Race, and found myself on the start line as the oldest in the field by 2 years! There were a heap of young speedsters toeing up, and eager to take down the old man and everyone else in between. Also pressing at the back of my mind was the recent “cult hero” status assigned to me by a cheeky writer from Victoria (http://www.athsvic.org.au/news/detail/the-road-to-zatopek10-goes-through-homebush). Whaaaaaaat? I’ll take it though. Does this mean I can buy a set of bath robes and grow a beard?

Anyway, ultimately the race turned out to be a real fizzer – for me. I was definitely out of my league against all these fast young pups. When the gun fired I found myself pushed to the back immediately and then was boxed in on the rail for the next 100m. Meanwhile the lead boys, including Nipper, Jezza and Ben “The Doctor” Moreau, those whom I’d planned on being right up there with, were skipping away into the distance. Their extreme pace meant that already being this far behind, I was no chance of making up the ground lost. I was spewing at my lack of aggression.

I tried my darndest to get up there though! But in the end all it meant was that the second pack had a chump doing all the work for the middle km and then they also kicked away in the final laps. I had a decent sprint finish to overtake a couple in the home straight – but I really needed another 18km of track…

Right. Well there are a couple of races that really exemplify the ups and downs of elite running. The soaring lows and the crushing heights. Or something.

As for race plans in the next couple of months – there ain’t any. Graham is holding his plans close to his chest at the moment. Sadly, I am going to be missing one of my favouritest races on the Aussie scene, the good ol’ Zatopek 10,000, for the first time in years. January looks like it could hold another Half Marathon, maybe somewhere chocolatey. You will be the first to hear about it! Well, after my Mum does anyway, of course.

Thanks for having a read boys and girls!