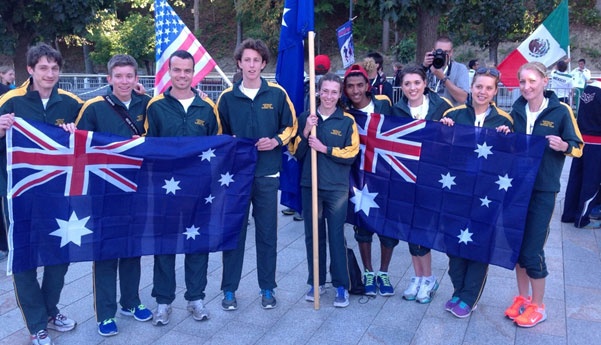 Hi, my name is Emma Kraft and I am from Alice Springs NT, and I am a squad member of Adelaide based Team Tempo which is coached under Adam Didyk. Living in Alice Springs as you can imagine there are limited opportunities to compete at a high level due to the location, size and demographics. Although I am extremely lucky to have an excellent local running club the ‘Alice Springs Running and Walking Club’ which is affiliated with Athletics NT, which has been the stepping stones to where I am today. In September 2013 I ran for Australia at the 29th World Mountain Running Championships in Krynica Zdroj in Poland, which was of course a career highlight!

Team Tempo Runner in Mountain Training before World Championships (no I am not asleep!)

So you may have seen me round the place, I travel to most races in Australia, including Melbourne, Adelaide, Gold Coast, Canberra, Sydney, Perth and Darwin. Remember that girl who came last at Zatopek 10,000m in December 2013? Well that was me J. As you guys may be aware there aren’t too many Athletes that come out of the NT, and you barely see ‘NT’ next to the names of a start list at National events. But I am trying hard to change this and to hopefully inspire other Athletes within the NT to strive and Dream BIG!

I remember one thing that really inspired me to be a better runner and to strive to be the best. I was chatting to Lauren Shelly at Falls Creek a few years ago and found out she made the Australian Team for the Commonwealth Games coming from a small town called Esperance (WA) which is smaller than Alice Springs. I thought to myself “if Lauren can do it coming from there, there is really nothing stopping me from trying to reach my dream”. I then started training under Didyk with Team Tempo which was one of the best things I have done for my running and also started using what I did have access to, rather focussing on what I didn’t have here.

Between now and then I have competed in 800m, 1500m, 3,000m 5,000m, 10,000m, Half Marathons, City to Surfs/Bay/Seas, I have tried track, road and I tried National XC at Nowra once in 2009 and again nearly died. Not sure why I suit Mountain Running and not XC, but I think I put it down to being inexperience in 2009 and just ‘one of those days’. I wasn’t really sure on my discipline and what suited me best. In March 2013 Tim Crosbie from Athletic Victoria who has been a huge mentor in my athletics career suggested I try Mountain Running! So off I went and trained up one of the only mountains here in Alice Springs, which is actually locked to the public. I remember the day after my first hill/mountain session, I had to take the next day off and organise a massage. Great, my Mountain running campaign started off on a great note……not. I went to Nationals at Mt Stomlo, Canberra, warming up in the freezing rain, thinking what am I doing here? It’s wet and freezing and now I have to run up a Mountain? I soon got over that and the race began. I ended up coming 3rd behind Kate Seibold (1st) and Brooke Williams (2nd), which was my 1st National medal! This was also the selection trials for the Australian Team in which I was hoping to make. I was pretty pleased with this effort and made some history with being the only NT Athlete to win a National Medal at Mountain Running and to make an Australian Team!!!

In September last year, I had my first opportunity to compete for Australia at the World Mountain Running Championships in Poland. This was a dream come true! Although during the race I was in so much pain, I was thinking why did I choose mountains! But in order to reach my dream to run for Australia I had to run this discipline! Beggars can’t be choosers right! I went over to World Champs in Poland and had the most amazing experience of my life. I finished 59th overall and was also the 1st Aussie female to cross the line! Who would have thought! A girl from the desert with only ONE Mountain to train on!!! I am so proud of all the other competitors who raced, especially my fellow Aussie team mates. It was a very tough race and the hardest thing I have ever done in my life. Although, when I was running up hill which was actually Zig-Zag as it was so steep, it was slippery due to the type of grass, I thought that was hard, but I then thought how much more slippery it would be if it was raining! Thank goodness it wasn’t raining! It occurred to me that things can always be worse than your current situation! I have so much more appreciation for Mountains and mountain runners, cyclist, skiers and goats now! I also learnt that you should never be afraid to try something new, as you never know where it will take you!

I travelled after Worlds and did the whole European holiday for 5 weeks, so obviously I went from the fittest I have ever been to jogging 30mins/day if I had time. Coming back was a struggle as I was unfit and the weather here in Alice Springs started to warm up, so I was unfit, fat and it was hot. Great. I struggled through Oct/Nov and got to December and raced Zatopek. This was my 3rd year in a row of racing this prestigious event, even if I did come last. I got ‘the encouragement clap’ from the spectators on the home straight and I am glad to say I finished which was still 11th at Nationals. Unfortunately no PB for me this time, but considering I could barely run 5km in 20mins during my comeback after my trip. I had come a long way.

My goals for 2014 are to stick to the Mountains and a few major road races. ‘The Higher the Mountains, the Better the View’, right! I planned to go Nationals Mountain Running Champs and will strive to make the Australian Team again. This year it’s in Italy and is all UP hill, for 8km. Poland was 2 loops of DOWN, UP, DOWN, UP, so you could go nuts on the downhill, give your body a small break and then slowly die on the uphill. But this year it is all UP hill! So I am preparing myself now and racing at the La Sportiva Mountain Running Series the Vertical K at Mt Buller (Victorian Mountain Running Championships) run on the 1st Feb (http://runningwild.net.au/), as this will also be similar to Nationals and Trials for Worlds. I will also plan to do my 1st Marathon at Gold Coast, in July, something I had to put off in 2013.

Thanks again to Runners Tribe, Team Tempo and my fans. I would also like to thanks all my Sponsors over the years and especially those who helped me get to Worlds in 2013. This includes:

You can find me on Facebook,’ Emma Kraft Athlete’ or on twitter @EmmaKraft2. You can also find more information about Team Tempo and Adam Didyk starting his on-line coaching business in the next few months at www.teamtemporun.wordpress.com or ‘like’ Team Tempo on Facebook at www.facebook.com/TeamTempo