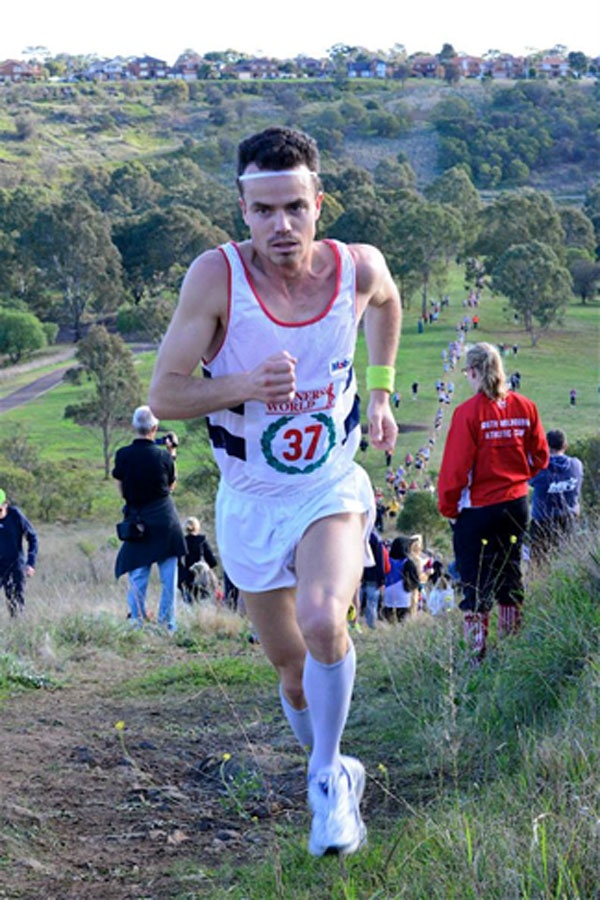 Mountain running alternates between all up hill courses and up and down courses, ranging between 12 and 14km in length. This year is an up and down year, with both the Australian and World Mountain Champs being held on a 4km course, 2km down, then 2km up, with the senior men to complete 3 laps.

The National Mountain Running Championships and selection trials for the 2013 World Championships were held on Mt Stromlo in Canberra on Sunday the 2nd of June. It was only a few months ago that I completed at the World Cross Country Trials at Stromlo Forrest Park just a few kilometres down the road.

Race morning was cold and wet and it was quite the effort just to finally get out of the car and warm up for the race. Starting on the summit, it was flat out downhill from the start, which had me thinking I really should have done a few more hammy stretches and downhill strides during my warm up! I usually like to go out conservatively and come home strong, but with a down hill start, there was no choice but to sprint from the start just to keep up with the front pack. I sat in 6th place for the first lap, then got into 5th at the start of the second lap and caught up to 4th just as we commenced the third and final lap. We battled it out on the 2km downhill section and were joined by a few Kangaroos on way, one bouncing straight across the track in front of us! By the bottom I had a few metres lead and now had a visual on 3rd. As we started the final 2km climb I thought that if I paced myself right I might be able to snatch 3rd by the top. With my legs burning like I was doing the last hundred metres of an 800m race, but for 10 minutes straight, I very slowly got myself into 3rd with just 200m to go and held it to the finish. Martin Dent took out the race as expected with Mark Bourne in 2nd.

So it was 3rd again for the 3rd time in my 3 attempts, I can’t say I was overly happy with the result, but with the limited build up due to some nagging tendonitis in my ankle, I was just happy to come away with another medal and again secure my place on the Australian team for the World Championships.

The following weekend was the Victorian 10 mile (16km) cross country championships. It has been run every year since 1892 and is believed to be the oldest continually run distance race in the world. Therefore this race is known as the heritage round for the AthsVic Winter series. The uniform requirements are relaxed for this round and for those that have their old club uniforms or anything retro really, this is the day to bring it out!
With my legs still rather sore from the mountain race just 6 days before, I just played it safe and took it easy.
Victorian 16km XC Championships

Victorian 16km XC Championships
I think Collis Birmingham pulls off the mo and headband a lot better than me!

After a few of months of reduced training (no more than 60km per week since February in fact), a lot of physio treatment and exercises, my ankle finally started to feel good. It was a weird injury, as rest would help, but after a week back training, it would flare up again. The physio advised that I didn’t need to stop running completely, but just had to reduce my load, get regular treatment and keep up the strengthening exercises. He was right, and after a couple of months of this and a few ridiculously deep tissue massages, it just started to feel good again! Finally by the middle of June I started to get some decent training in and got back up to around 100-110km plus a few gym sessions each week. I’ve never been one to do massive k’s, averaging no more than about 80km per week in the last few years, but being more of a distance than middle distance runner these days, I know I’m going to have to do a few more. Saying that, I feel, for me at least, high volume is useless without getting in the quality sessions consistently.

So two months of solid training later and it was the Vic 8km XC champs, one of the XC races I had my eye on since the start of the session, as it was at the extremely tough Lander Park course in Warragul. With a number of open drains to jump, steep up and down hill sections, and a fence to clear, it’s just the course that suits me.
Victorian 8km XC Championships

It was a group of 4 of us who broke away on the first of two 4km laps, with Mitch Brown, Ryan Geard, Tasmanian Josh Harris and myself each taking the lead at some point. It was on the second lap that Mitch Brown took control and ended up running away with the win, although I was pleased to push him all the way and finish just 7 seconds behind.

As I write this, it’s only a few days until the National XC Champs in Tassie. I’ve been pretty happy with the way I’ve been running and getting some good hill sessions done at the You Yang just outside of Geelong. The Monday after Nationals, I’ll be on the plain to Poland to compete at the World Mountain Running Championships. I’ll let you know how it all goes next time.