From the author: I’ve teamed up with @runnerstribe over the next fortnight to deliver a daily rundown of the 2019 @iaaf_athletics Championships direct from Doha, Qatar

The Doha Diaries will delve into the day to day life of one of the richest countries in the world during the biggest athletics meet on the calendar. 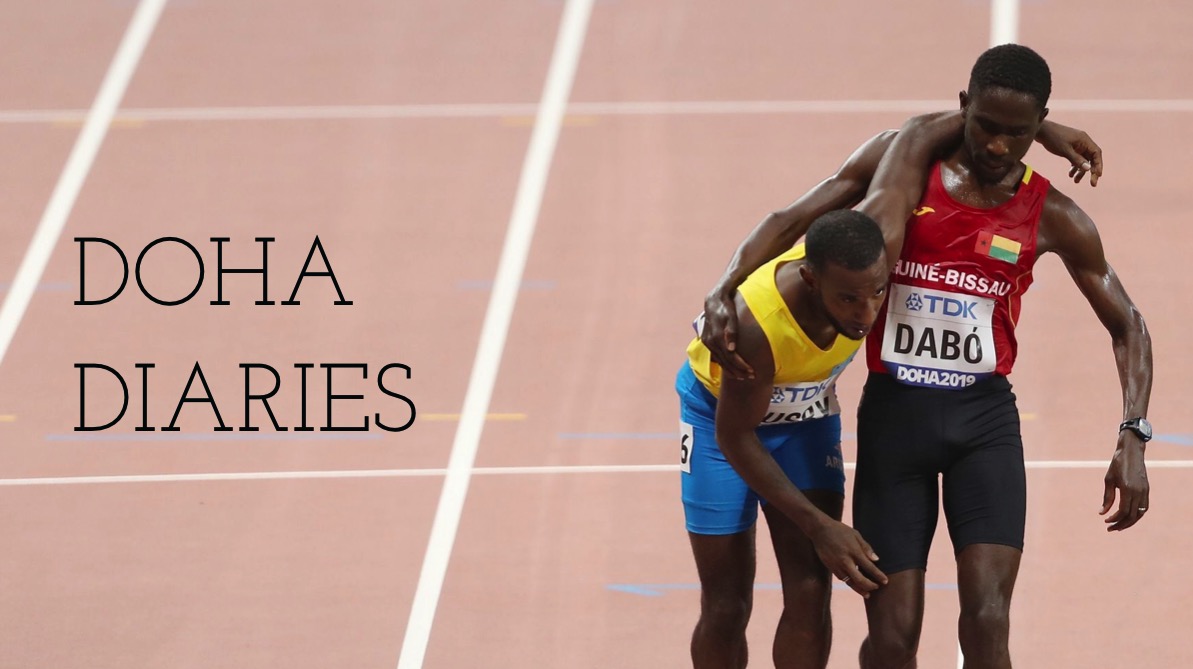 We finally made it to the big dance.

We survived almost 18 months since the last major championships, but today we finally got to see our Aussie Track and Field heroes don the “green” and gold again in the air conditioned, feat of engineering wizardry that is the Khalifa stadium!

Feeling inspired by all the amazing athletes in Doha and an early, time zone induced wake up, I headed to the hotel gym to bust out some reps. After knocking off a few virtual laps of Lake Merced on a pretty cool treadmill, I remembered on October 4th there’s a media race in the stadium. There’s no way I could pass up an opportunity to throw on a pair of splitties and hit the track.

Unfortunately for my fat, out of shape shelf, it’s an 800m.

Just like the milers of yesteryear, I’ll be aiming for a sub 4min and not dying. But if I only achieve one of those goals (hopefully the latter) I’ll be happy.

Due to the late booking of my trip (previous plans fell through), I’ve had to book a little further away from the media hotel cluster. This cluster is also the central drop off and pick up point for the free media transport. Although I’m only staying about 600m away, it’s a heavy 600. Think Sahara Desert crossing. To make matters worse, everything is so blindingly cold inside, that when you take that first step into the oven that is Doha, your entire body is covered in condensation. It’s a weird feeling walking outside, sunglasses fogging up and being soaked in a few seconds.

Out at the track, I set myself up in the Main Media Centre (MMC) and dug into the media feast. Random meatballs with BBQ sauce, tiny olive pizzas and a great set of the thinnest spring rolls I’ve ever seen (I think they were also filled with cheese?)

The dessert section only got a light browsing by myself, but it should be warned that I will be making many, many more appearances there in the future. It is only day 1.

The conditions today seemed more oppressive than normal. Sitting in the media bays we are a little higher up, but it looked like tough going out there for the athletes.

Doing a little bit here with Oceania Athletics, it was great to see so many athletes flying their countries flag in the 100m prelim rounds. Don Motellang from the Marshall Islands grabbed himself a person best, a goal I’m sure every athlete here wants to achieve, and Fiji’s own sprint king Banuve Tabakaucoro did enough to get him through the prelims and earn another run in the stadium.

On the Australian front, Morgan Mitchell was incredible as she closed like she was running down-hill to move to the semis, Genevieve Gregson scored. Tokyo2020 qualifier and made the steeple final, while McSweyn made his first world final after finishing fourth in his 5km heat.

Mixed night for the rest of the aussies. I’m sure a lot will be disappointed with how they went. Sometimes athletics is treats you well, and other times it sucks.

To finish off, there was a great moment on the track in the first 5km heat. These two athletes were lapped multiple times (once after the bell which was absolute chaos as they stayed on the rail) with Aruba’s Jonathon Busby basically staggering with a horizontal lean with 250m to go. As Braima Dabó from Guinea-Bissau caught up to him with 200m left, he offered his support and basically carried Busby to the finish line.

It was a long last 200m, busby barely staying vertical, the crowd roaring in support, possibly more distance runner thing imaginable happened. Dabó dragged Busby the final few metres, and as Busby stumbled across the line, barely able to stand up, he stopped his watch. Gotta get those accurate splits.