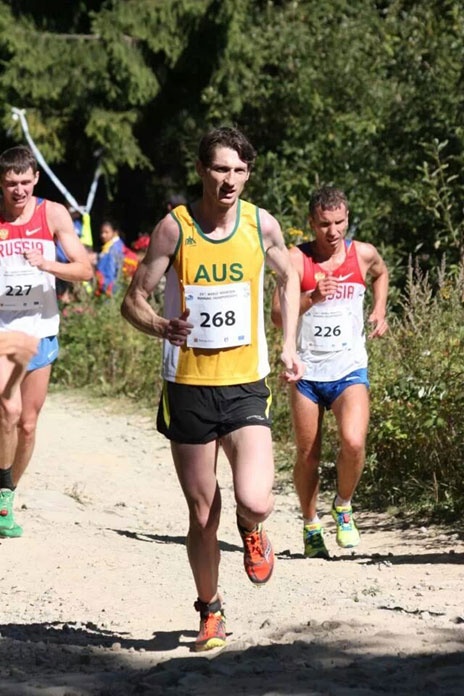 2013 so far has been a year of trying new things. As some of you might know athletics NSW added a few new events to the winter premiership this year, one of which was the state mountain running championships. This event was held in Orange as part of the great volcanic mountain challenge; an annual race, which I found out, is quite prestigious amongst the locals. I’d never tried mountain running before, but Bankstown was trying to put a team together to get an early lead in the winter premiership in an attempt to retain their title, so I decided to have a crack. I got an early lead on the flatter first half of the race and managed to hold onto it despite having to walk for about 100m on the last hill. Some of the locals found it quite entertaining when I admitted I’d stopped to walk, but believe me it was an extremely tough event (or maybe I’m just soft). For anyone who has run the big hill at Nowra, there were 3 hills of similar gradient but about 800m in length. It felt like trying to race 3 800s with tempo runs between. The lactic acid kept building up and I just couldn’t seem to get rid of it. Despite finding it quite difficult I ended up running the course record so decided that maybe it was worth having a serious attempt at doing some mountain running. I entered the national championships, which was held in Canberra this year on Mount Stromlo. This again was a very tough race. This race was an up and down course, a bit different to the race in Orange which was predominately up. The downhills were a desperate scramble, trying to maintain footing on the loose and rocky fire trail whilst running as fast as possible. I found I was good at this kind of running, maybe I was just stupider than everyone else and took more risks but I managed to gain ground down the hills. The up hills were a different story though. The other guys killed me up the hills. I managed to come in 5th. With Martin Dent unavailable as he is running the Marathon at the world championships, I qualified for the world mountain running championships in Poland (Team of 4). This is very exciting for me. It’ll be my first chance to represent my country and I’m sure it’ll be a fantastic experience.

I’ve also been trying a few new things in training. I did a running gait assessment at Prime Physiotherapy with Daniel Wainwright earlier in the year (Video at http://www.youtube.com/watch?v=KNmitCVL5KQ&feature=youtu.be if anyone is interested). For years I’ve trained with the mentality that to get faster, train harder, which I’m certainly not disputing. I think though that it is also very important to train intelligently, to recognize individual weaknesses and to address these. From the gait analysis I found that my technique was not as efficient as it could be. To rectify this I’ve been training with Sam Peck (my hurdles coach) doing a series of drills and stretches along with my ordinary distance training with Dave Chisholm. Technique takes a while to change, so it’s a bit early to see the effects of this training, hopefully though by the track season I’ll be seeing some improvement.

I’d just like to finish by thanking Bankstown Sports for their support over the years. Bankstown subsidise a lot of my races and are contributing significantly to covering my costs of competing in the world mountain running championships. As I’m sure you are all fully aware it can be quite tough financially being and athlete, particularly in an amateur sport like athletics. I buy all my own gear so having someone to subsidise my races has been fantastic. It simply wouldn’t be financially possible for me to compete at worlds without this support.