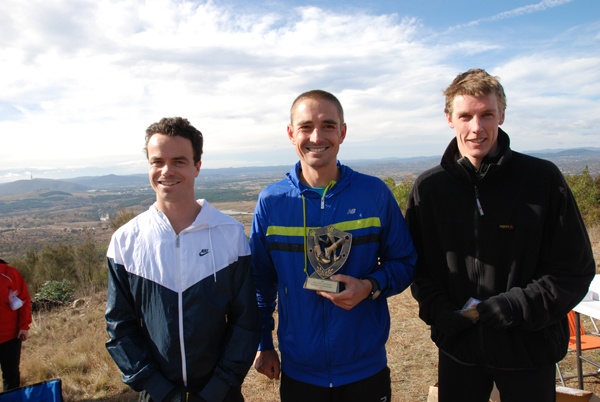 I have run Australian championships in distances ranging from 3000m (or 1500m as a junior) to half marathon, over steeples, cross country, track and road, but I have never run an Aussie mountain running championship. With the titles being held in Canberra and the course not quite as steep as it is most years, I wanted to give it a go. The course was three laps on the back of Mt Stromlo, starting at the top, dropping about 170m before climbing back up. It included two hills on Deek’s 22 mile loop that I have suffered on many times over the last 15 years of Sunday morning long runs (as we have 25km in the legs by the time we reach this point). Therefore, I decided the 12km course should be doable and after a couple of training sessions on the course, including a solid two lapper, I was confident I was ready to handle the event.

In the 24 hours leading into the race it had been raining steadily, but the old, well-worn Stromlo trails were as good as they are in dry weather, so mud wasn’t an issue. A downhill start ensured that Kamikaze starts were going to be the trend. I struggled to hang on for the first few minutes and had to use my speed on the few flat sections to peg back ground on the front runners. In training I had been running the down section fast in about 5:30, but in the race we hit the bottom corner in 5:00. Everyone made it down unscathed (on the outside at least). The grind back up to the top was going to take about ten minutes and I expected to run it at whatever pace the leaders were going. However, I moved to the front of the field and started to pull away about half way up the climb. The climb was as tough as ever and I went through the first lap in 14:39 with a 30 second lead.

I tried to recover on the down the hill of the next lap. Running sub 3min/km felt easy descending compared to working hard at 6min/km up hill. I hit the bottom of the hill with 5:24 split (which was more sensible than the first lap!). I kept the pressure on uphill and went through two laps in 30:04, the second lap was 40 seconds slower. My lead had grown to about 1min so all was good. Another descent back to the bottom corner in 5:26 showed I was getting tired. I expected the third climb to be brutal, but found my groove and felt strong most of the way up, reaching the finish in 45:35 to win by 1min 19sec. I had slowed a bit again on the last lap, but not too badly.

This was my 7th senior national title over four different surfaces. It was great to see my training partner, Mark Bourne, pick up second place and our ACT team (which also included one of the great characters of Canberra running, Stuey Doyle) won the teams event.

Remember don’t be afraid to try something new, you never know you might find your niche.