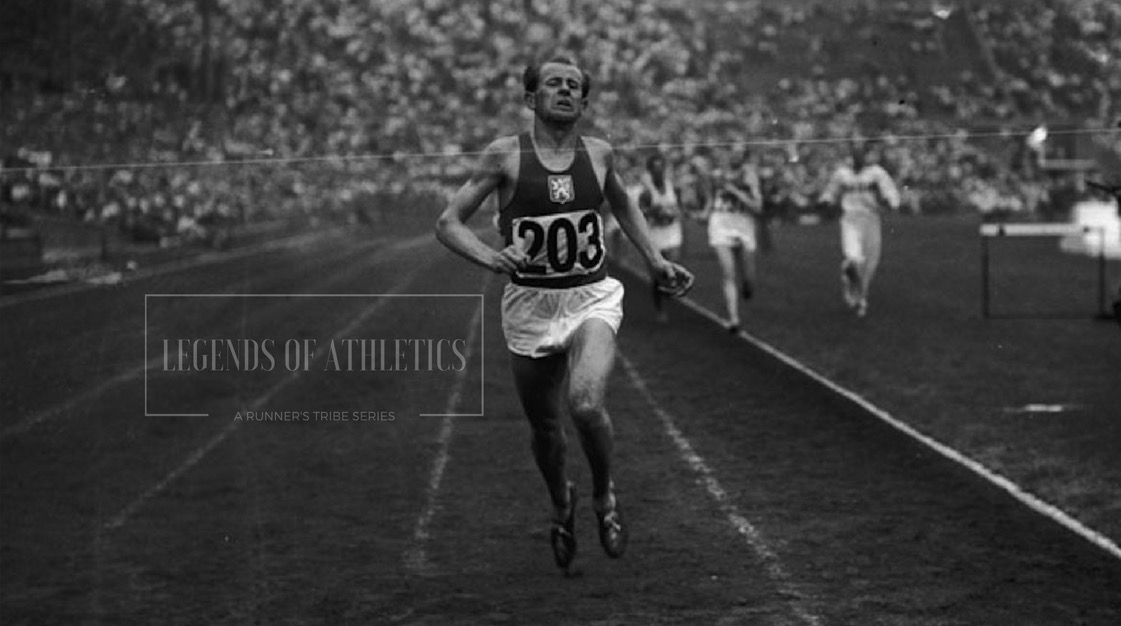 Words can hardly do justice to the man who I have looked up to and admired ever since I first learnt about him during my early running years.

Much has been written about his many running achievements: World records, numerous championship and non championship wins and 4 Olympic Gold medals, including his amazing triple at the 1952 Helsinki Olympics, winning the 5000m, 10000m and the Marathon.

His training was also legendary – hard, tough, brutal – fancy a nice 60 x 400m in army boots anyone? However, even more impressive was Zatopek the person. A Zatopek story that has always stuck with me is what happened the night before his 10000m final at the 1952 Helsinki Olympics. Late at night a reporter knocked on his door demanding an interview. Instead of telling him where to go, as most athletes would, Zatopek invited him in to his room and proceeded to give the reporter a long and lengthy interview. Once that had finished, and Zatopek realised that the reporter had nowhere to stay, he let the reporter stay in his bed for the night!

Another story that shows the character of the great Zatopek, has an Australian flavour and is recounted in the excellent book about Percy Cerutty: ‘Why Die’ (Graem Sims). The late Les Perry, a champion Australian distance runner from the 1950’s, was on a mission, before his 10000m event at the 1952 Olympics, to seek Zatopek out and hopefully exchange a few words with the great man. He found Zatopek at a training track just outside the athlete’s village and introduced himself. Zatopek’s first words to Perry were “You come from the other Village to see me? You honour me! Join me. We will run together.” After 20 laps of running, Zatopek invited Perry back to his accommodation for a meal and the two enjoyed a great evening together with Perry eventually making his way back to the Australian accommodation in the Village around midnight, having made a great friend. Percy Cerutty, Perry’s coach, decided, after hearing Perry’s story, to visit Zatopek the next day. Again, Zatopek was a gracious host and looked after Cerutty for most of the day. When it got late, Zatopek amazingly offered Cerutty his bed to sleep in while he slept outside in a sleeping bag– Cerutty took him up on his offer!

Zatopek’s selfless spirit extended to him being prepared to stand down from the Czech team for the 1950 European Championships unless his younger teammate, Stanislas Jungwirth, was reinstated, after he had been dropped from the team because his father had spoken out against the Communist Party. Such was Zatopek’s popularity that Jungwirth was quickly reinstated.

Finally, no writing about Zatopek would be complete without mentioning Ron Clarke’s visit to Prague to see Zatopek in 1966. After a highly enjoyable trip, with Zatopek’s trademark generous spirit and hospitality, Zatopek handed Clarke a package, just as Clarke was boarding his plane to leave Prague, with the words “you deserve it”. When Clarke opened up the package in mid air, he discovered one of Zatopeks Olympic Gold medals – a medal that had eluded Clarke during his own brilliant career that had included 17 official World records.

Much more could be written about Zatopek: a superstar on and off the track, who touched a huge amount of people and was loved by many. Appropriately, our most important and revered distance race is named after him.

Ron Clarke summed up Zatopek well when he said “His enthusiasm, his friendliness, his love of life, shone through every moment. There is not, and never was, a greater man than Emil Zatopek.”

About the Author: Mark Tucker has represented Australia numerous times through World XC, to the World Championships Marathon (2009). Tucker was known for is toughness in training and races and consequently had many top wins. He finished 4th at the NCAA National XC representing Butler in 2002. He has broken the 4 minute mile with 3:58.37 in Auckland. He is a talented writer and a highly valued member of the Runner’s Tribe team.

Some Zatopek viewing. There’s a good amount on YouTube.