Home Features Josh Harris RT Journal: It’s been a while 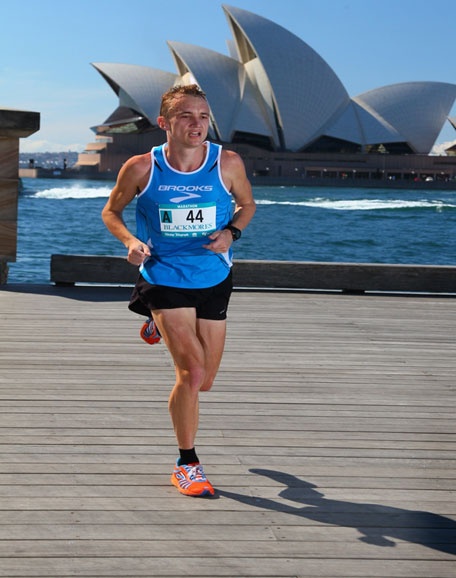 Hello to everyone reading!

It’s been quite a while since I wrote a blog for Runners Tribe and a bit has happened in the meantime. I have spent the majority of 2013 has preparing for a marathon debut, but I have also managed to run PB’s for 1500m, 3km, 10km, Half Marathon and the Marathon in the space of 6 months.

I will start with a quick recap of my winter:

I couldn’t have hoped for more from my winter. I was very pleased with all my race results once I got into decent shape. I knew I was fit by the start of July, and I was rewarded with a half marathon PB of 1:06:21 in a local handicapped race in Tassie. From this point the majority of my races were cross country races, which I have struggled with in the past. I was lucky enough to be assisted by the Frankston Athletic Club who flew me over to compete in a lot of the XCR races over winter, which was great. I placed 3rd in the race at Lardner Park, which I was happy with on a course that really didn’t suit me. I went on to place 3rd in the Tassie XC champs, and was really happy with my race. 3rd place at states ended up being to 3rd and 6th placegetters at the nationals, so I can’t complain with that. I finished 8th at national XC, in my first open XC nationals. I was over the moon with this, after running a smart race and not getting sucked into going out too hard, which is often the way in a XC setting. The national XC was my final race before my marathon debut in Sydney 3 weeks later.

The marathon was probably the worst day of the year for me. After stringing together the best period of training of my life, I felt as though I went into the race as prepared as I could be to break 2:20. Nothing went right on the day, and I didn’t feel like I got into my normal rhythm at any stage of the race, and I faded badly after I fell into 2nd place in the National championships. I ended up running 2:31, after going into the race thinking that even if everything went wrong that I would still run no slower than 2:25. This was quite disappointing, but hanging on to win the national bronze medal was the one positive that I took from the day. I’ve always wanted an individual open medal; however I would’ve loved a different colour in the end. I have no immediate plans for my next marathon, but my initial thoughts are that I will look to run my next one in a cold climate, similar to a Tasmanian winter, where I have done my best work.

I feel like I physically recovered from the marathon very quickly, which has shown in training. I am not sure why but I suspect this is partly due to my slow last 15km having less of an impact on the body, and the durability that my body seems to have. I have however had some trouble digging deep in the crunch moments of races since the marathon. I entered the Burnie 10 as a last minute decision after feeling good and running a PB at the race last year. I got to the 3km mark I almost just let the main pack go and ran to the finish as a tempo. I learnt from this, and think it’s very important to freshen up mentally after putting the body through so much stress over the months and years. I’m very motivated and think I just need to give it some time before I am mentally ready to give it my all in the crunch situations again.

2013 has been a great year for me in terms of training. I have always believed that consistency is probably the most important factor for improvement. We are into November and I have had only had 5 days off for the year. In my marathon preparation my mileage peaked at 206km in a week, with 10 weeks over 180km. On the other side of the spectrum only 3 of my weeks have been less than 100km this year, including the week after the marathon where I didn’t run much at all.

This is my first year of doing consistent weekly mileage over 160km, after gradually building up to the workload over the past 5 years. I hope that another 3 years of this volume of training will reap great rewards for my marathons in the future.

Since the marathon I have returned to training feeling very motivated and have jumped into training with the TRC (Tailrace Crew) boys from Launceston. We can be seen running/tanning in almost any weather. I have no earth shattering goals for the summer, and want to remain versatile before I potentially have another marathon preparation in 12-18 months time. My current weekly structure includes some pretty long runs for a track runner, mixed with basically one 1500m, one 5km and one 10km-half marathon specific session every week. Last season I lost some quality in the specific longer work after Christmas when the more speed oriented guys in the group started to sharpen up, and found it hard to run a good 5km, which I want to do this year.

A current week of training over the past month is as follows:

In my down time I have recently finished the first year of my masters at uni, so I have been getting right into Grand Theft Auto 5. I love my X-box and am currently working towards attaining 100% completion in the game (I am at 95% as I write this). I am more of a gaming person, rather than watching movies as I feel like I have control over the outcome when gaming. I also love the fact that you can live so many different lives in games that you can’t in real life, such as a NBA or FIFA superstar, or a criminal in the case of GTA! Apart from that coming into summer I am a big advocate of a $1 Frozen coke after a run with the boys!

I’d like to thank my sponsors Brooks Running for their continual support, the TRC for making training fun and Runners Tribe for the opportunity to write a blog! I also have a website that I update semi regularly if anyone would like to check it out the link is here www.beermile.wix.com/joshharris