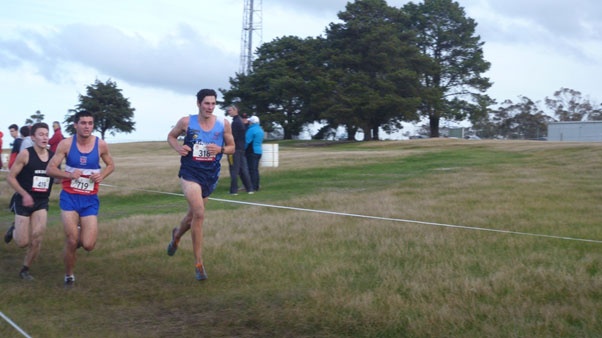 I am writing this on my flight out of Launceston after what was my first experience at the Australian Cross country champs. I had been running a few local cross country races in preparation to this race but after walking the water filled course Friday afternoon I realised there wasn’t much I could do to fully prepare. I knew this race was going to be tough with the likes of Patterson, Stapleton, Curran and Matthews pushing the pace out front and it just became a whole lot tougher.

I’ve never been much of a cross country specialist so the plan was just to tack on for as long as I could and hopefully still be there when it comes time to kick. I’m not one to go into a race hoping to just ‘run my best’ and stay in my comfort zone I like to go for the win no matter what distance or competition and this was no different. After the first 2km lap I was sitting in about 6th and didn’t feel too bad despite going through in low 6minutes. I knew after the fast first km id pay for it later on in the race but I continued to stick with the pack until about the 4km mark where they opened up a gap of about 10m before I found myself going backwards fast. The next 4km was pretty ugly and not just because I’m an ugly bloke. I was done. I finished up 24th with a time of 28.20 something I’m not really too happy about but it was a great experience and I’ve got no excuses. To top off the day I had a few bets I made for best finishing position before I found out how tough cross country actually was. My running partner Karlie Swanson finished 2nd in the u18s girls and Milly Clark finished 4th in the opens so I only lost by 20 places. I gained a lot of respect and congratulate everyone who ran down there. It was a tough day.

Now that cross country season is finished I can put the 8-10km races behind me and focus more on the shorter stuff. I will be travelling up for the Noosa bolt 5km which looks to be a fast race from the previous year’s results before kicking of my track season at the NSW 3000m champs. A lot of these races are a first for me and I’ve been learning quite a bit about racing over the longer distances as well as learning about myself, what my strengths and weaknesses are and what I’m capable of off certain types of training. The last few months we’ve been experimenting with different blocks and so far they have all been paying off. Hopefully I can take all this into my 800s next season and surprise a few people.

Id like to thank New balance Australia for their continued support and look forward to racing for them this track season.

Until next time,
Jordan