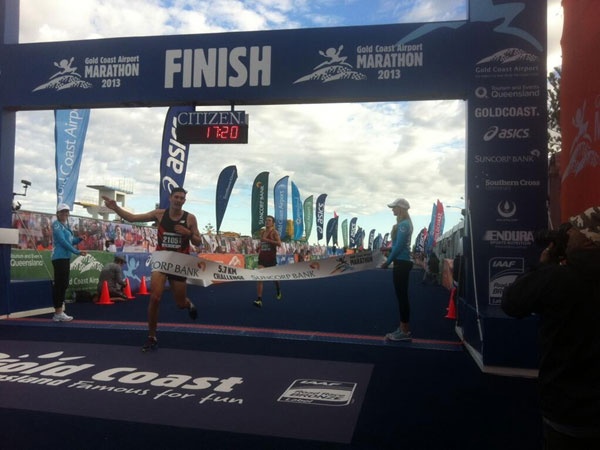 Last time I blogged I had just finished my season and was enjoying some down time which consisted of a fair bit of binge eating, sleeping and surfing.

I am writing this as I travel home from the Gold coast Marathon and as the title suggest I am well into Base training and getting stuck into it.

Cross country season is well under way around Australia and although in past years I had never really done many crossy races or big km weeks in general this winter has seen me get amongst the scene running a few local races on the Mid North Coast of NSW and keeping my weekly km count consistently high however about 6 weeks into training the hard work had to be put aside so I could run my pre departure for the U20 Mannheim event which turned out to be an interesting experience. Over the two week period I had three races. The first race I got the full experience of 5000m National Champ Cam Page as he dropped the hammer from 400 out off a slow first lap and opened up a gap that I just couldn’t peg back. Much like what he is doing to everyone over in Europe at the moment. The next two races may as well have been solo, one had a few top blokes from QEII pacing to 400 and the other I lead from start to finish. Both had an atmosphere equivalent to a year 12 HSC exam and I was unable to hit the mark coming within .8 of the pre. AA just don’t understand that these standards aren’t easy and to run them by yourself in an empty stadium in winter is something not many people could do. Maybe that’s why there weren’t any Male distance athletes on the trip. What made it even funnier was that the warm up meet in Germany was won in 1.57 and the Mannheim meet in 1.51 something I was more than capable of in a proper race. All I have to say is nice work Athletics Australia.

Although disappointed I quickly realised my training would be much more productive back here then running a few more solo races in Germany and in the last few weeks it has definitely shown. I Managed to run a 16.10 5km cross country race a week before running my first 15km race a part of the North Coast Road Championships where I won in 52.04

Today I ran the 5.7km challenge on the gold coast as I knew I wouldn’t be able to match it in the 10k. After a fast first 500m to get out of the pack it settled down and I slotted in behind the two leaders. Id had a bit of a cold the week leading in to the race so the plan was just to sit and kick. Jack Bruce lead for most of the first 4km before youngster Riley Cocks made a strong move and opened up a gap. At this stage I was sitting a few metres back so he opened up a 15-20m gap on me before I reacted. With a km to go I managed to peg back the gap to about half the distance and kicked past him with 400m to go before we ran neck and neck to the finish. We both ended up about 20seconds under the course record so it was a pretty quick pace.

I’ve been really enjoying the cross country races this winter and look forward to the next few races. I will be running the NSW short coarse event in hope to qualify for nationals in Tassie so im sure to see everyone around the place shortly.