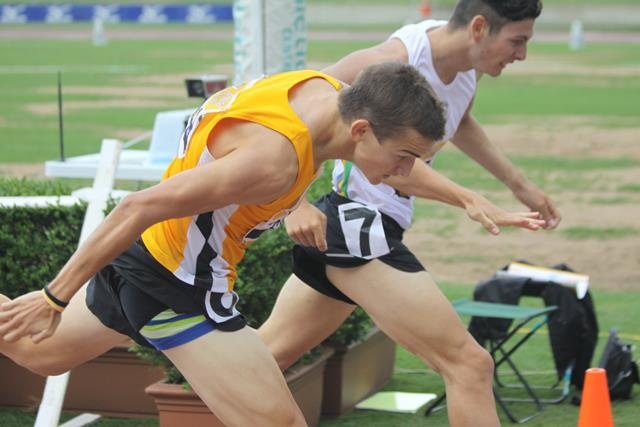 The 2013 Australian Junior Championships was full of excellent performances both on the track and the field. The Australian Junior title was something that I had always wanted to win but with this being my last year it just wasn’t meant to be.

After my performances at both the Hunter Track Classic and NSW Juniors my chances were looking really good for Perth. I had a 1.50.41 next to my name and with only 4 weeks to go I was looking like the favourite. Unfortunately a few days before the 800m final at NSW juniors I picked up a bit of a cold. Although I was still able to win in an exceptionally close race against good mate and fierce rival Harry Scouller the next day the cold had become worse.

In previous years I had tried to train through a cold and it never really worked out so I decided to sit out and wait for the cold to go before I continued training. After waiting it out for the next week and a half it finally started to go and I could continue my training. At this stage I only had two and a half weeks left and I was struggling to find form. During my week off the weather decided to turn on me as the mid north coast region experienced floods and I found myself training in the mud. Although it made the sessions a lot harder I must say it was pretty fun.

We flew to Perth on the 9th of March so I could get some work done on the track and get used to the time difference. Apart from the crying babies the flight wasn’t to bad, I got chatting to the old Irish bloke sitting next to me and turns out that he was an 800m runner himself. For the next two hours we talked about the ‘good ol days’ as he called them, of Steve Ovett, Seb Coe, Steve Cram and Sonia O’sullivan before I accidentally fell asleep on his shoulder, oops.

The week leading into competition went well and I started to feel more confident with every session. My main two rivals decided to run low 1.49s within the week of our race which pushed my ranking back to third. Off the track I didn’t do too much in this week except play a whole lot of pool, I found I wasn’t the greatest pool player and over the ten days and 100+ games I managed to beat my dad once.

As the Competition started I spent a few days at the track getting worked on by the lovely NSW physios, hanging with good mate and mentor Nick Bromley and enjoying the races. It finally came to heat day and with the main three separated we all won our heats quite comfortably. I qualified the fastest with my 1.53.65 and was confident I had a lot more left in the tank.

The next day was Final time. I drew lane 7 and had the other two heat winners inside me in lanes 3 and 4. I had the plan worked out which I thought could win me the race but knew it was going to be tough. After 100m I found myself behind which was surprising as I was moving quick. As we came onto the straight for the first time I found myself in 4th about 15metres of the leader as Peter ‘the Bolconstrictor’ Bol kept pouring on the pace to go through the bell in 52.3 with Timas Harik closely following.
I went through in a tic under 54 and as we moved down the back straight I found myself making up nothing on them. I was lucky enough to pass third off the bend and finish in 1.51.2. The race completely surprised me as I found myself chasing the whole way. I was disappointed with the place and the time as I wanted to win but just glad I wasn’t sick like the previous two years and after all it is still third in Australia I have to be happy with that. Bol did end up breaking Alex Rowe’s Meet record running 1.48.90 also so he is definitely legit.

As I arrived home Tuesday afternoon I had a package waiting for me with my New Balance race kit and a few other goodies inside. I Cant wait to run the two laps in the NB gear at the Brisbane Track Classic on Saturday night as again I try to break the 1.50 barrier.

That’s all for now guys, thanks for reading.