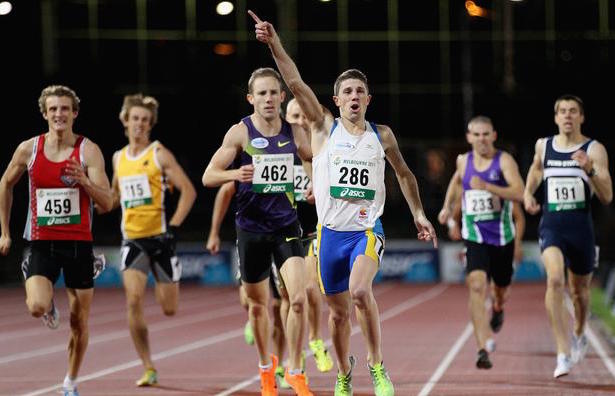 Just four months ago I completed what was one the most successful seasons of my career thus far. And now only 2 months out from the 2010/11 season I reflect on the highs and lows of last season and the winter I just had.

10th of December 2009 was exactly 12 months to the day after I had a splenectomy to cure a blood disorder I had been diagnosed with in August 2008. This was the same day as the Zatopek meet in Melbourne, and for me this was the return to competition I was eagerly anticipating. I had a mixed preparation up to this point, with some okay races through that winter. My body was ready, my mind on the other hand was lacking confidence. I was however, prepared to take on the season and prove that I had overcome my illness. I managed to perform well above my expectations and had gained my confidence back along with a great start to the season.

The period between December and February was hard for me. I found cracks in my training and fell short in the Hunter Track classic and Graeme Briggs meets. It was after these two races that I had realised that I was no longer a junior and I could not get away with training like a junior anymore. To this point I had trained solo and was coached only by my Dad. The partnership worked well, and clearly my dad possessed skills far greater than that of any other parent after coaching me to two world champ finals (WY 07 & WJ 08). I was in need of a training squad and someone outside my family to take control of training for me. That was when I employed Jimbo (James Fitzgerald) to begin coaching me. I joined TFS369, Jimbo’s training squad. And straight away I was surrounded by a group of talented juniors and seniors. Training with Nick Bromley was one of the benefits of being in this squad.

My training regime never really changed. It was more having a group around me during sessions. The group atmosphere helped immensely with my confidence and was the real turning point for me during the season. I had turned my focus towards the 1500m for Melbourne track classic and the International meet in Christchurch. This decision was made in an effort to build strength leading into nationals. Up until this season I had never really raced 1500m in an open field. The races were run a lot different to the races as a junior. It took me a few races through the season to get it together. By Melbourne I was ready for any pace. Unfortunately the star studded line up didn’t live up to the expectations and after the first 800m was slower than 2mins it became anyone’s race. The last 300m was something I had never experienced before, sub 40s was crazy. I knew that I had a kick in me and finishing just behind the leading 5 was a good result and gave me another pb.

Following good performances at Melbourne and Christchurch, where I had improved my 1500m pb to 3.43, I looked towards 800m for state champs and Nationals. Having poor performances in the 800m earlier on in the season it was now time to turn that all around and prove that I was still a threat. State champs were an interesting race. With an opening lap of 58 and being at the back of the field was not ideal. I made a decisive move just before the bell and got myself into a fairly useful position on the track. 200m out everyone had lined themselves up for a shot. Renshaw and Gurr had taken off and I had latched myself onto the back of them. I used the strength I had gained from racing so many 1500s and had enough to kick home. Finishing 2nd. This result put me into good stead for nationals and I took myself away and spent the next couple of weeks putting the final touches to my training. I raced the week before with training partner Nick Bromley over 800. Clocking a pb of 1.47.57 just a week out from nationals was huge boost for me.

Nationals came along very quickly. The season had, to this point, opened my eyes to a lot of things, racing, training and experience. I had taken on board everything I could. I knew that all these things will be needed for nationals. Not having posted a Comm Games qualifier to this point I had my focus wholly placed on just winning the race and not on trying to chase a qualifier. I knew that to win the race I would have to run quick. The race, unlike state champs, was on a good pace. After going through in 53.5 I felt comfortable and stuck to my plan. Finishing 2nd in 1.47.04 for was a good result. I had turned a rough start in the 800s at the beginning of the season into a great conclusion. Giving me plenty to learn from.

After finishing the season with a 1500m pb of 3.40.8, from Osaka GP and 800m pb 1.47.04. I took these results, experiences and used this for the winter. My winter training block was solid. Had some good performances in terms of road and cross country races. But really just kept my head down. Did the sessions prescribed. I have taken on board everything I had learnt from last season and applied them to my training because I know that’s what I lacked last season. After missing 2008/09 summer season I didn’t have anything to work from during the summer. Now looking towards 2010/11 summer season I have last season to work from. I have confidence that I never had at the beginning of last season.

I am jumping out of my skin to get back out on the track.