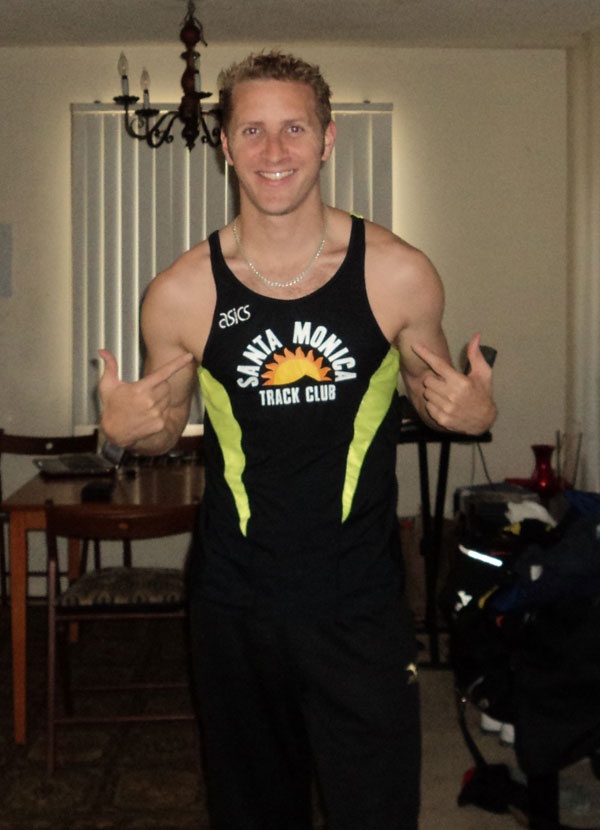 Where to begin? I have now been in the U.S for a month now, training with the Santa Monica Track Club based in Southern California and it has proven to be a most eventful month, one in which I have really found out a great deal about myself, in regards to both track and life. The initial adjustment has been tough, yet I have been grateful for having gone through it, as it has given me true perspective of what is important to me.

After having lived in the U.S for 3 years while in college, I was tremendously excited to return to the states, as I had made my strongest friendships while there. Yet upon arriving I found it to be rather overwhelming and my first few days were extremely difficult. After having such an embarrassing season in 2013 I had questioned my future in track, and with my teaching and tutoring career blossoming, I had on occasion wondered if I was due to move on with the next phase of my life. My exact thought was “What have you gotten out of track?” The answer to that question was A LOT. A college degree, a life experience in going to college, overseas travel, the opportunity to compete against (and occasionally beat) the best in the world and some unforgettable memories. If someone was to ask me about my track career if I walked away right now I would probably say “I think I did alright.”

But after a few days of adjusting and getting rid of the initial anxiety and homesickness, I got to thinking. I have never been a person who has really been content with “alright”, at least not in track. That was why I came here. I wasn’t content with being a 1:46 runner; those times won’t even leave a dent in world class running. Given the opportunity, I would have to be a fool to step away now. Having idolised such SMTC legends like Johnny Gray, George Kersh, Steve Lewis, Danny Everett, Mike Marsh and of course Carl Lewis, I thought “This is something you have dreamed of, and it’s right here in front of you.” Being 29 years old (30 in December), I’m no spring chicken; this is the break I was waiting for. After meeting with my new coach and founder of the SMTC, Joe Douglas, I realized what I had been invited to be a part of. Stepping into his office and looking at the walls, I saw legends of the sport from the last 30 years, all of whom came from this club. It was quite an awe-inspiring and humbling experience. The fire was back.

It didn’t take long to realise why these guys were so successful and so strong. My first training session I was sent on an easy 6 mile (approximately 11km) run with Felix Kitur (1:44.84 PB). Through the run, in which I was still fighting off jetlag, I noticed that Coach Douglas was driving alongside of us, making sure our body mechanics were good and that we were running at the requested pace. I thought to myself “This guy doesn’t play around.” After being unable to attend the second session, I turned up the following Monday to which Joe asked why I was absent. After telling him why, this tiny man looked me dead in the eye and said “Don’t miss any more days, you come every day. Got it!?” After the first half of that session I was getting my breath back and he asked if I was ready. I said “Give me a second.” His reply was simply, “That’s a second, now get going.” You get the picture. Despite his no-nonsense approach, Joe is a very affable man, and is very good company and will do anything for his athletes.

Since then I have been slowly adjusting to the workouts, the lifestyle and the weather. In that time I went through the most painful session I have ever experienced, my legs have never ached liked that before. Yet in an almost sadistic way, I loved it (once I recovered). The group itself has been extremely friendly and welcoming. It is also great being the slow guy of the group in the 800m. My fellow 800m runners, Felix Kitur (1:44.84), Prince Mumba (1:46.14) and Masato Yokota (1:46.16) are all faster than me, yet I am familiar with each of them having raced them at some point in my athletic career. The way in which many SMTC runners race, (Johnny Gray and Khadevis Robinson perhaps being the best examples), also suits the way I run, as they often run hard, either near or at the front. Felix Kitur ran very well this past season doing that, improving from 1:46.5 to 1:44.8 in his first year at SMTC. Doing many of my session with our 5-10km man Tonny Okello, it gives a fresh perspective on training as well. Living with Prince is great too, as living with a fellow athlete means you understand and appreciate each others lifestyle. In training in such a different manner and being more volume based (in winter prep) than previous years, perhaps this is the key to unlocking the progression in times and in helping me finish my races off (an admitted weakness).

So now here I am, training my a** off with renewed vigour, ready to not only resurrect my track career, but do things that I have never done before. Not only that but I have a great support crew, where there are no egos, no petty jealousy, no gossip, no bitching and no nonsense. Just a humble, professional environment, with a bunch of guys who want to help each other run bloody fast! Isn’t that what it should always be like?

From Cali, till next time!