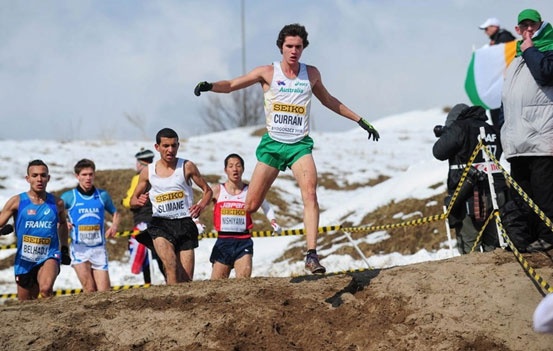 First I would just like to thank Runner’s Tribe for letting me blog for them again. At the moment I am on my way back from Poland after just competing at the World Cross Country Championships. I am flying solo as I was the only Queenslander to go over and compete, a bit lonely but a good time to catch up on some lost sleep and write a cheeky blog in the meantime! I ended finishing up in 48th place in the Junior Boys 8km race, a spot that I am really happy with. It was an amazing race just to be apart of, and something that makes you realise how good some of those guys really are. The conditions were not ideal but everyone was in the same boat so I can’t really complain about that. It was on from the start with a fair few spills in the first 100m, and the very first turn was iced over in places, which made it really slippery and also caused a few casualties. Luckily enough I came out okay, as I saw a couple of other Aussie boys come around me I think I thought that they were going to fast so I didn’t go with them. This probably cost me coming into the closing stages because I was just playing catch up for the last half of the race. I managed to catch up to Jack Davies and we worked together over the last little bit and nearly nipped me on the line! I didn’t know he was so close until I crossed the line and looked around. All the boys ran well and we managed to snag 8th place overall in the teams event.

The best race of the day by far was the open men’s, the best race I have EVER experienced in my life. When Collis took the lead at one stage in the race going up the stinger of a hill, I was that excited I was tingling and got the shivers. It will be a race I always remember, and not only was Collis up there but both Liam and Brett cracked the top 30 with Steve and Mitch coming in shortly after. They are also some of the nicest guys you will ever meet, so down to earth and always have time for you. It was great to be on the team with such good people and especially the other junior boys. One of the advantages of it snowing so much were the incalculable amount of snow fights and sneaky snowballs to the back of the head (sorry Mitch Brown that was me, I didn’t mean to).

From here I will head to the Australian Athletics Championships in mid April to compete in the 1500m. I haven’t run a 1500m race since November last year so it will be good to get a time before the season comes to a close, hopefully a good one! Then onto a little bit of a break, it has been a long season and I have been suffering with a bit of a plantar problem which I have had to train through for the past month and a bit, so it will be good to get that back to 100%. I have recently started seeing my old lecturer, Rob Marshall, for treatment and the results have been great. I have seen a lot of physiotherapists and massage therapists in the past and no one is able to get the results he does, his superb knowledge of the human body combined with his skillset of manual techniques is second to none. I don’t think I will take too long off; I want to keep building on my km’s and have a good track season next year. I haven’t had a proper track season in the past few years and I’d really like to see some of my hard work pay off on the track. I will go down to national cross country champs again this year and do some cross country races in QLD leading up to that. One race I am already looking forward to is Noosa Bolt in November! I have only raced once before, the day after my school GPS Athletics competition and had a shocker. So I am looking forward to that and the weekend that comes along with it. I will sit down with my coach when I get back to Brisbane to talk about my year to come, so after that I will have a bit more of a structured calendar for 2013.

As far as my life away from running goes I am currently just working and running, and I am still undecided as to when I will go back to uni and do something there, but at the moment I would really like to just see how my running goes and give it a good crack while I can.

I am looking forward to having a good sleep when I get back and, as a good mate of mine and runner likes to say, ‘beans’ it for a few days before I go back to work. Thank you for taking the time to read my blog.