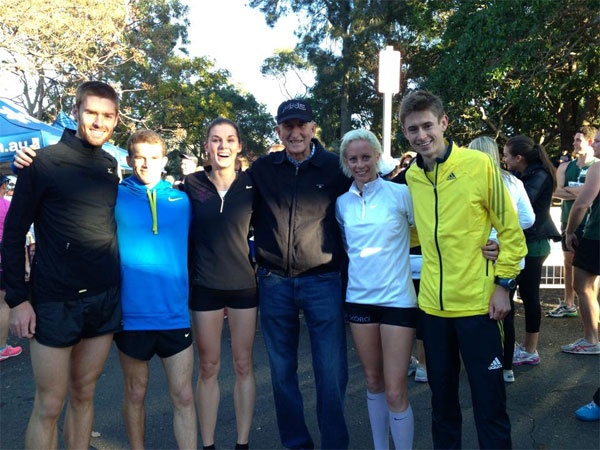 I’m sitting at my desk with a pile of musculoskeletal anatomy notes in front of me, dreading the impending doom that is my last two exams for the semester (I’ve already done six!) and I thought now would be a great chance to procrastinate and churn out another journal entry!

To sum up what has been going on the past few months, very little. Studying for physiotherapy has slowly been controlling my life. Getting out of the house and seeing friends has been put on the back burner and as a result, my standard dress code consists of fleece, top and bottom. All class.

On the running side of things, I’ve been training relatively hard and racing hasn’t gone as well as I would’ve liked. In 6 days, I raced in the Mini Mos 10k and then NSW Cross Country Champs at Nowra. Both courses were very hilly and unfortunately both didn’t go to plan. My coach, Sean Williams has been great during this stressful time (exams and poor races) and has been great in keeping me motivated and rested so that I can approach exams and races with a clear head. Hopefully once this exam period finishes I can achieve some great results for both Sydney University and the adiRunner program.

I’ve also thoroughly enjoyed having company over the past few weeks of training as it has been my only social event of the day and a great chance to unwind. Team SWEAT has a strong group of runners of a similar ability (Neil Berry and I are so similar in PB’s and session times that we end up having a good tussle in training sessions!) and when any of us are having a tough session, we help each other out. Having this group makes getting through the sessions so much easier, especially in comparison to when I was training on my own in Inverell!

A big highlight of the past few weeks was meeting Herb Elliot at the Mini Mos 10k finish line. To be in the company of such an icon of athletics was quite nerve wracking however it was a delight talking to him briefly, it was quite funny seeing his eyes light up when seeing Neil Berry’s Perth Runbirds singlet. Still a Western Australian at heart!

One other prompt for me to write this journal was a news article I read today, regarding the withdrawal of Scott Westcott from the World Championships Marathon. The details are a bit foggy so far and I’m not sure of the full story but from what I have read, it is a shame that our governing body isn’t able to help Scott out and have some sympathy for him not just as an athlete, but also as a husband and father. Based on what I saw first hand at his Australian 25/30km record attempts, he is in amazing shape and would have represented our country well. There’s a Facebook page set up already titled “Let Scott Westcott Run” which all should like and support such a fine ambassador for our sport

Until next time, happy running