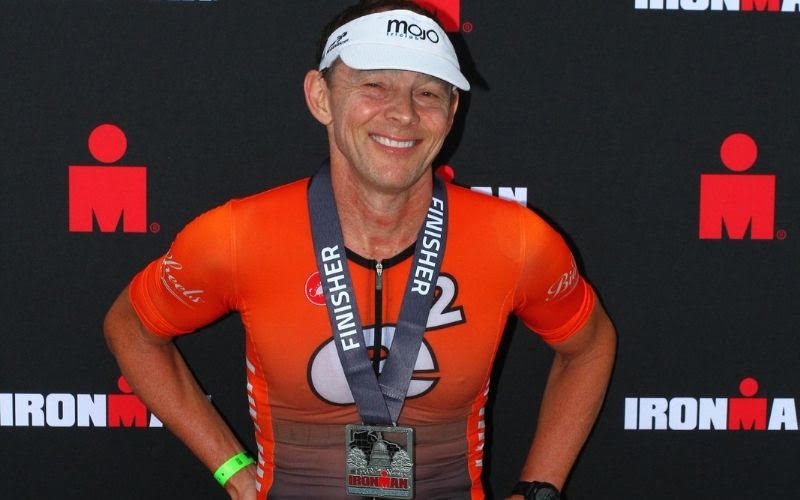 Early on September 12th, I found myself at the starting line of my third Ironman competition at Wisconsin. I had trained for many years to get there, but my goal was to qualify for Kona 2022. There was only 1 way to guarantee my spot at Kona, I had to win my age group.

The race consisted of a 2.4-mile swim in Lake Monona, a 112-mile bike ride through the hills of Wisconsin, and a full marathon as the final leg.

Over the previous summer, when people asked how my training was going, I said the bike and swim were great, but I was struggling on the run.  As a lifelong runner, I found myself coming to terms with having shin splints right at the point in my training when I was scheduled to complete several critical long runs.

An MRI revealed that I had a stress reaction on my tibia.  Once the diagnosis was clear, I knew I had to lower the training miles in the short-term and I began seeking ways to get back to running more so I could keep my eyes on Kona.

I was researching this topic one day and started listening to an episode of the Run Smarter Podcast.  Ben Lindsay, a biomedical engineer, was being interviewed about a new product, Solushin, to help with shin pain during running.  I contacted Ben, told him about my goals, and was able to get a Solushin to try out.

I found it easy to figure out how to use the Solushin. The Solushin isn’t a normal compression sleeve, but instead compresses where your shin splints are inflamed and reduces tension in your calf muscles. The video helped me know the spots to target on my leg and the instructions were easy to follow on how to do it step by step.

I used Solushin for 2 hours usually just before my runs every day.  It was very easy to use and comfortable to wear around the house as gently stretched the injured area.

My first check-in with Ben was 9-days after getting the Solushin and I was already progressing. I wasn’t pain free yet; however, I was able to run without any adjustment to form. My pain-level was down to 1-2 out of 10 and there was on pain after my runs. I felt like I was getting stronger with each run.

I continued to slowly rebuild my running volume.  After about 4 weeks of wearing Solushin, my run mileage was back to where it was before the issue – about 30 miles per week. I was still at about 1 or 2 level pain out of 10 so my shin splints weren’t completely out of my mind yet. But that was big progress!

I carefully progressed my run training from every other day to a peak training run of 16 miles just 2 weeks before the Ironman.  For marathons, I would normally have several runs with longer distances, but this was far as I could progress with the limited time left before the race.

Now at my race in Wisconsin, I found myself completing the swim and bike and beginning the marathon in 5th place and 25 minutes back from the leader of my age group at the start of the run – the leg of the race I had struggled to train for due to shin splints.

Fortunately, I had friends and family on the course that day and there were plenty of timing mats for them to track my progress.  I received updates throughout the run, and I knew I was moving up in the standings.  At mile 17, I moved into the lead for my age group and was able to hold on to finish Ironman Wisconsin as an age group winner!

With this win, I fulfilled a lifelong dream of qualifying for the Ironman World Championship in Kona, Hawaii, in October of 2022.  After reaching this goal, I am even more grateful that I found Solushin. The Solushin helped me increase my running load quicker and managed my shin pain for the event.

Now 10-days after my Iron Man, I am running with no shin pain.

Thank you Ben and the team at Solushin!

In exchange for Mark participating in a case study, the team at Solushin provided Mark a Solushin sample free of charge. The Solushin is a class 1 medical device listed on the Australian Register of Therapeutic Goods (ARTG 325902). This review was done in accordance with the Therapeutic Goods Advertising Code (No.2) 2018, Part 2, 17. Testimonials.