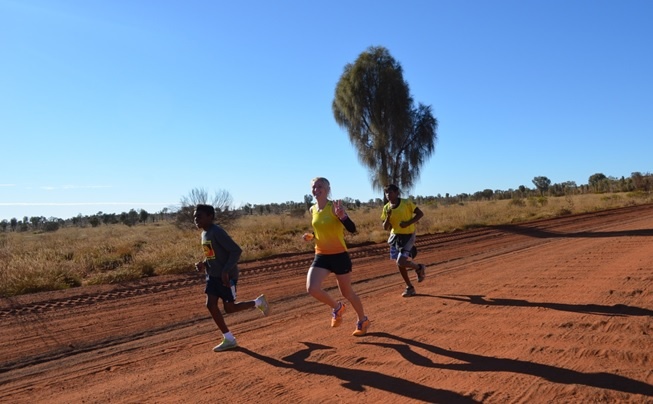 Welcome back! I’m sure we are all inspired by watching the Commonwealth Games especially with a Gold Medal performance by Michael Shelley and a Bronze Medal from my Team Tempo Team mate Jessica Trengove in the Marathon! And of course all the other great performance in Athletics!

As you know running can take you to the most amazing places in the world!! There are no limits and it’s up to your imagination of where you want to go and race and/or train!!!! In January 2014 I decided to plan a trip to the USA over the Easter period, and off I went. The plan was to race a 10,000m in California (Mt SAC) and then head to Colorado to train in the altitude and mountains. Most of you have probably heard of Colorado before or at least ‘Boulder; Colorado’, which is where some of the Australian elite runners train or live such as Lee Troop and Benita Willis. I heard it was amazing and I decided it was time to ‘Make it happen’.

On Thursday 17th April, I raced the Mt SAC Relay (Mt San Antonio College) which is huge event over there. I ran in the 10,000m on the track and ended up coming 6th in my race and also clocked a time of 36:25 which is a 27sec PB or PR Personal Record which is what they call it over there. This time has gained me an Australian ranking for 10,000m for 2014 and a qualifier for Zatopek (Australian National 10,000m in December). Overall I am so happy to have gained a PB for 10,000m!!

I then moved onto Colorado Springs, Colorado, USA, and I ended up climbing/running/walking/crawling upPikes Peak Ascent (Manitou Springs) which is about a 40% gradient, so basically I was moving for 1.4km but gained about 610m up which took me about 35mins, and there were over 3000 steps!!! So I averaged 17mins/ km, which in comparison I averaged about 3:40mins/km at the 10,000m on the track at Mt SAC. The World Mountain Running Long Course Championships are actually held here on the 16th August which we have Ben Duffus (QLD) who recently took home the Bronze Medal at the Sky Running World Championship Mont Blanc 80km Ultra Run in Chamonix, France on 27 June and Harriet Smith (QLD) representing Australia. More information can be found at www.pikespeakmarathon.org

The aim of this trip was to set myself up well for the Australian Mountain Running Championships in May at Mt Tennent, Canberra, which also included a good 10km hit out at the Sydney: 10 a week earlier. Unfortunately my race schedule didn’t go to plan with me getting sick with the flu once I returned home from the USA. I did all the right things, including resting, but I just wasn’t strong enough to run. It was a tough discussion to pull out of the race as this was also one of the selection races to make the Australian team. However, luckily enough I ended up racing in early February in the Victorian Mountain Running Championships (La Sportiva Vertical K) at Mt Buller and took the win in the females division, fortunately I could use this result when submitting my application for the Australian team. This was also one of the toughest races I have ever run.

I am proud to announce that I have made the Australian Team for the World Mountain Running Championships in Casette Di Massa, Italy on the 14th September. This will be my second time representing Australia and I am extremely grateful for this opportunity. I am so glad I will be wearing the Green and Gold again with 2013 team mates; Katie Seibold (VIC), Nick Wightman (VIC) and Bryce Anderson (ACT). I am also extremely excited to meet the rest of the Australian team and share this experience with themwww.wmrc2014.com

In the mean time I have just completed my debut Marathon at Gold Coast on the 7th July. I ended up finishing in 3:04:26 and crossing the line in 33rd position. This also doubled as theAustralian Marathon Championships which was won by Victorians Tarli Bird, followed by Aarthi Venkatesan of QLD and I finished in 12th place. I’m not going to lie, it was definitely tough, but the amount of race and training experience I gained was invaluable. I now want to do another one and use what I have learnt from my debut marathon and hopefully I can sneak under 3 hours. I am looking at doing the Gold Coast Marathon next year and hopefully improve my time and placing.

My body pulled up ok, with the most damage being on my toes of all things. I ended up getting two toe nails surgically removed and a few others took a good beating. I was then forced to rest, which was probably a good thing, allowing my body to recovery. This also included a few massages and physio appointments so I’m ready to get going again once my toes were healed.

Crossing the line at my Debut Marathon at Gold Coast

A week after the Gold Coast Marathon I was also fortunate enough to be part of the National Deadly Fun Run Championships held at Uluru. This is the 3rd Championships and is an initiative under Rob De Castella’s Indigenous Marathon Project (www.imp.org.au) and is organised by 2011 IMP graduate and inspiration Nadine Hunt. This year there were 8 community teams, this included; Gapuwiyak, Thursday Island, Galiwinku, Murraylands, Mossman, Mutitjulu, Areyonga (Utju) and the University of Canberra. My amazing Healthy Lifestyles and Smoking Cessation Team at Central Australian Aboriginal Congress were lucky enough to be team managers and mentors of Mutitjulu and Areyonga (Utju) community’s teams.

Mutitjulu runners received a pair of shoes donated by “Shoes for Planet Earth”www.shoesforplanetearth.com. Thanks to IMP for organising this.

Running with the Areyonga Fellas

As you can see it has been an amazing few months with plenty of goals achieved so far. I am looking forward to the World Mountain Running Championships in Italy and getting back into Mountain training over the next few weeks. I have a few local races here in Alice Springs which includes the ABC Half Marathon Event and the Alice Springs Running Festival (www.alicespringsrunningfestival.com) before I depart for National XC in Albany in WA and represent the NT! We also have some junior boys representing the NT in which I am very excited about. This also includes Alice Springs based runner Alex Race-Stelling in the U14! Go Alex!

Thanks for reading my Blog, I really hope your have achieved some of your goals for 2014, if not, it’s never too late to get out there and have a go!!!