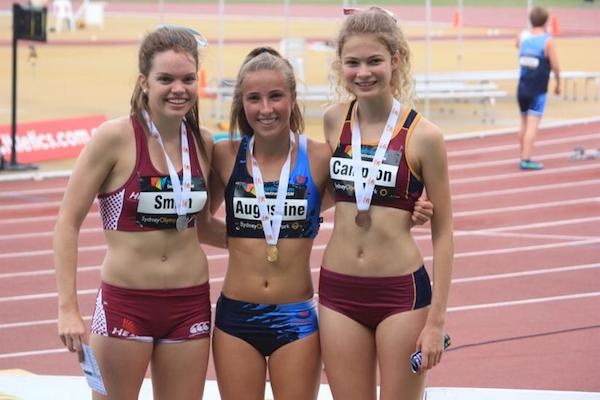 I’ve been asked to write about any aspect of running so far in my life for Runners Tribe, which is my first time, so bare with me! I’ve decided to write since the start of cross country season in August last year. From this time onwards, the time went from lows to highs, which I’ve become accustomed to in training and in many other aspects of athletics and that you sign up to from the beginning. I’m sure you have heard that there are plenty more good things to come and far worse situations! The best thing to do is, stay positive and make the best of a bad situation.

Firstly, I’ll tell you a little bit about myself. My name is Emily Augustine, I am 16 years old and currently in year 11 at high school. I started Little Athletics in the u/7’s following in my sister’s footsteps as it seemed like a lot of fun. From here on my passion grew for running. I loved the individuality of it even though it can be a team style sport as well. When I was younger, I was never the favourite in races and certainly didn’t win very many races, probably none at all, but I loved to run and that was enough to fuel my determination to succeed, which my parents might say Is due to my ‘fiery’ attitude.

My first major win was in march 2012 at the Australian Athletics track and field championships in the u/16 1500m with a time of 4:35, which I was ecstatic and was my first taste of a perfect race. Over the years I have learnt you have to listen to your body and know when to stop, not having to do everything that’s set on paper. Running in my training group is very laid back and relaxing which makes things not as serious, which I believe has made running enjoyable and takes the pressure off. My training group consists of older people rather than young with days where I train by myself or I just have one or two others running with me. But middle/long distance is a solitary training sport.

My season started off with cross-training due to a fall earlier in the year at the 2013 at Nationals cross country where I injured my knee. I slowly got back into training, which was a shock when I realised how much it affected me. I remember the first race I had to do was for school and that didn’t go down to well with the pasta I ate before the race.

Later on in March, training was going well and my speed was improving with the added 200m and 400m races at Saturday afternoon competitions. It was at this time my coach(Alan Nolan) and I decided to focus on competing in the 800m and 1500m (instead of 3000m and 1500m)in the Australian Junior championships which made it easier to train specifically for both together.

This season my coach and I focused on improving my base speed as it proved essential and necessary for both events. Saturday afternoons consisted of mostly 200’s and 400’s in the Treloar shields out at Homebush which is a big change and quite daunting standing with all the sprinters and watching them use blocks so confidently compared to my abilities. This helped me become stronger throughout my races and be able to kick home in the last lap of the 1500m staying strong particularly with my arms.

Most of the season I faced the problem that my 1500m third lap would be slower than the rest which was in the back of my mind each race becoming a bit of a mental problem. I finally overcame this at the right time in NSW Open State Championships in Sydney at Homebush where I ran a new PB of 4:26.02 improving my previous best by 2 seconds.

A bit over a week later I competed in the Australian Junior Championships in the 17 years 800m where I was the 3rd athlete to cross the line in a very close race. My times was 2:11.46 which was a PB improved from 2:17 at the start of the season. I believe this definitely helped my 1500m speed. In the 1500m, I found myself in the final and was surprised with the confidence I had gained throughout the process. I usually struggle mentally in believing that I actually have a chance even if I’m the favourite. This did wonders. When the big race came, I was still nervous as I put pressure on myself to do well, also wanting to further improve my PB. My plan was to try and lead the whole way and see what I could come home with. This worked out for the first lap but the next two I let the other three girls overtake and dictate the next two laps. On the last lap, I decided to go for it to secure first place, taking off and gaining a lead at the bell and held it from there. I was so excited with the win but also at the same time a bit down about not improving my PB but I soon got over that.

After winning the National 1500m title, I was lucky enough to compete in the Australian Open Championships. I faced a tricky decision in deciding over Year 11 camp or competing in Open Championships in Melbourne. There are lots of these trade offs every month, but with the support of my friends, family and Roseville (School), I chose to go to Melbourne as it would be a great experience running with the older world class girls in their respective fields. I also knew I had the potential to run a faster time with the opportunity of a fast pace race to push me along. I wanted one more PB for the season. I arrived in Melbourne on the Wednesday night to the expected chilly conditions and competed in the 1500m heat the next day. I was mostly excited but definitely scared about how I would go. I was honestly thinking about competing on the ‘pretty’ blue track of Lakeside more than anything. I made it through the final, which I certainly did not expect. Now that I had made the final I had nothing to lose and just had to give it my all, trying to keep my composure with a day break in-between the final and heat. Racing in the championships was such a good experience. It was a fast pace from the get go which proved to be taxing later on. Mainly running in lanes 2 and 3 the whole way was just exhausting and I was excited to reach the finish after a tough race.

Recently, I have been officially announced to compete for Australia in the World Youth Olympic games in Nanjing, China later this year In August. At the moment, I am competing in a few XC races and juggling school. It’s a challenge to compete at an international level in track when everyone is doing cross-country. However, this will be such an amazing experience that I will get to share with my teammates and will be so much fun and an honour to meet all the other athletes from different countries in an Olympic type culture.
I can’t wait!