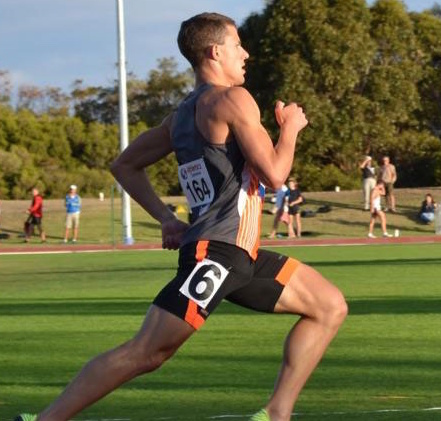 It’s been just under 2 years since my last blog entry…why has it taken so long to put something together? Well honestly I’ve been waiting for that break through run to happen so I’d have a bit more to talk about. Sadly that’s not been the case, but I figured it would better to write something a little more insightful; that might be able to help someone else out who is in a similar situation.

I started drafting up this piece a day after finishing a disappointing 5th at the recent Open Victorian Championships; with my mind clouded by the result, I found myself trying to justify my poor performance. Only once the dust had settled and I’d come to terms with how everything panned out that day, did I realise that this knock down to earth was truly a blessing in disguise.

Over the past 2 years, I’ve been lucky enough to have reached a level that has allowed me to travel around Australia and compete against some of our best runners in the hope to run better times in my respective events. You’d think being motivated to run faster and faster week in and week out would be a positive thing, but I quickly realised that you become your own biggest critic. Running 1:50 for the 800m quickly loses its novelty after the 20th time of doing it (ask Fitzy) and “breaking that barrier” slowly begins to be placed on that ever growing pedestal. Now I have managed to break that mark; running 1:49 in Brisbane last year, but the frustration of not getting the results that I ‘expected’ from myself quickly takes over. When I look back at the 2012-13 season, 2 major factors stand out; I started chasing races and quickly veered away from my plan.

Athletics to me used to mean forgetting about all the negatives and leaving the track with the sense of accomplishment; that you were stronger and better than you were when you first stepped on it. Somewhere along the way, I slowly started to forget that message and neglect the plan my coach and myself had put together at the start of the season. With the continual disappointment of not achieving the goals I expected from myself came the gradual dislike towards running. What’s the point in training so hard when you’re not getting the results?

This is where I change my tone and stop whinging about nothing.

Every athlete reassess their last season; taking note of their weaker areas that they’d like to work on and the goals they’d like to achieve during their peak; mine was to increase my mileage and strengthen my aerobic capacity with the main aim of improving my sluggish 4:05 1500m time. I’ve been told by numerous coaches that the key to distance running is having solid base training to build onto, which I didn’t quite understand until I started training at Police Paddocks with Richard Huggins and his training group and I wasn’t able to walk for a few days! However this was exactly the motivation I needed; seeing the level of training that was required was a perfect indication of how weak my distance legs really were.

The biggest problem I faced during the early stages of winter training was that I was trying to drag my fat 85kg body through 100+ kilometres which caused me to have numerous injuries, particularly a torn Achilles that set me back 3 months. Lucky with the help of Matthew Hassett (Osteo) and the rest of my training squad, I was quickly back on my feet and had managed to drop my weight down to a comfortable 72kg before heading up to Falls Creek to train over the New Year’s break.

This was my first time up to Falls Creek and I was eager not to just train hard but also learn as much as I could from all the other experienced athletes. What an eye opener it was! I spent 2 weeks at altitude training with Ken Green’s NSW athletes; getting the whole ‘behind the scenes’ look at some Australia’s best – they know who they are. Besides my 38km blinder where I was “that kid” that got lost for 4 hours, I left with a new found respect for those guys that train at that intensity all year round and the amount of preparation and recovery that is required.

With every New Year’s passing, new resolutions are made; mine was to start taking my athletics a little more seriously, which meant reprioritising my life to suit the additional training sessions, recovery excises as well trying to keep a healthier lifestyle – cutting back on the junk food and alcohol. With the plan to travel to Europe and compete straight after the Australian season with my coach and training partners, it meant that this new frame of mind was essential if I wanted to make the most of this opportunity. The plan leading up into Europe was to start the latter part of the Australian season strong and carry that momentum with us so we can hopefully run fast as well as learn some new racing tips along the way.

I opened my account for the season with my first race in Newcastle at the Hunters Track Classic where I ended up coming last in a time of 1:50 in the 800m. I was so caught up in the fact that I’d finished last that I didn’t even comprehend that I’d just come off a block of solid winter training and that I was nowhere near peak race fitness. Looking back on it now you realise all the little mistakes you make along the way, but that’s how you learn and I hope people reading this do the same. Straight after HTC I entered for the Briggs TC down in Tasmania and was determined to do well so that I’d get selected into the Sydney/Melbourne Grand Prix’s’, sadly this wasn’t the case. I may have finished second however my time was too slow. This is where I started neglecting my original plan and started chasing races/ times to satisfy my expectation after the amount of work I did throughout the winter.

With the continual disappointments of not finishing as well as I would have hoped, I didn’t realise that my training program was suffering as a consequence with all these additional races being added to it and that my love for athletics, particularly the middle distance events was diminishing. It was only once I sat back and reassessed everything after the State Championships that I noticed my mistakes; I was so focused on meeting my high expectations, I was psyching myself out before the race had even started. It was only when I was competing in my non preferred distances like the 3000m and just recently the 15km Run for the Kids, that I notice that love for the sport return. Without all the stress and pressures to perform, I managed to finish with some good times.

Having people like Olympian Craig Mottram and 3 time 1500m State Champion Daniel Clark pass on their past experiences and give me positive advice going into the final stages of the Australian domestic season as well as my upcoming international debut, has helped me realise that you’ve got to be confident enough in yourself and the training you’ve been doing, and not be disappointed when a race or time doesn’t fall into your favour. Only you and your coach really know what phase of training you are really in, and if you follow the plan you initially set for yourself and not let additional factors influence you, then I’m sure it’ll all fall into place.

As always I’d like to thank Tom Kelly, Doncaster Athletics Club, Saucony and Back in Health Osteopathy for the continual support.