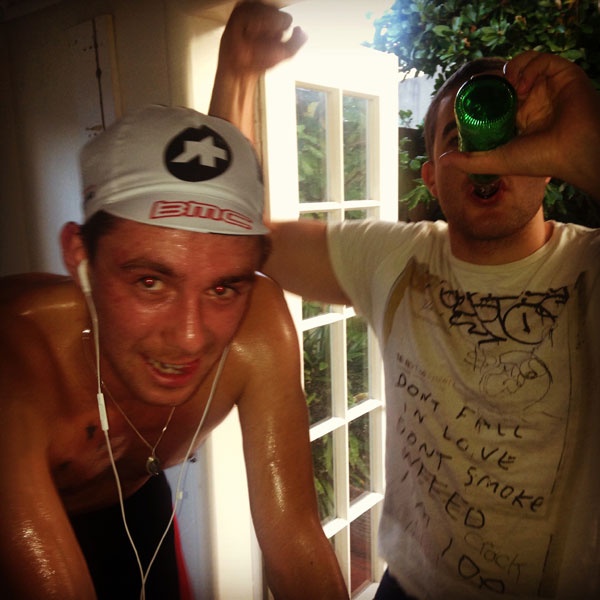 When Alice went down the rabbit hole, she had eaten some “magic cakes” before spending time with a smoking caterpillar, chatting with a talking cat, and drinking heavily with some guy in a massive hat surrounded by flamingos. Most of us can only get this kind of experience in Las Vegas, and would consider it nothing short of an awesome time. I’ve been down the rabbit hole for what feels like an age. For me it’s been a party I never wanted to go to but wasn’t allowed to leave, while I only drank what was in the teapots to try and forget how much of a shit time I was having.

In 2012 I was ranked 3rd in NZ over 10,000m, went to the World University Cross Country Championships, and graduated from Colorado State University. I was aerobically fit, but both mentally and physically I was in pieces.

Running a lot is hard on all the systems, but it remains an extremely natural movement – if not the most natural movement, evolutionarily speaking. For me it has been a constant struggle, for reasons I couldn’t understand, and more importantly, for reasons no Doctor, Physio, or Chiropractor that I saw in Colorado seemed to understand. So I just did what I had always done. I ran… a lot.

Most people would break, but I never did. Despite having bi-lateral hip surgery, I’ve never had a running-related injury that has forced me to stop training. The hips were genetic; a gift I’d rather have never been given, but while almost everyone else in my situation would break somewhere, I never did. That’s my talent and my curse. No stress fractures, no pulled muscles – just compensations. By the time I finished the 10,000m at Stanford in 2012, I was in such pieces that my warm-down was a hobble to the van and a bottle of red wine. Although my season continued, including internationally, it was all pretty much over at that point.

All I have wanted since 2012 is to “run free”. Cliché, yet accurate. I wanted to be able to lace up, and just run. Not thinking about every step, not consciously trying to ‘activate my glutes’, ‘lift my hips’, or ‘land underneath me’ – it’s awful, but that was what it had become. Running had gone from a movement, a reflex, to something mechanical. It was planned, a process I was trying to create. There was nothing natural about it. I had gone from playing ‘Total Football’ as the Dutch to the New Zealand All Whites; lobbing long-balls into the box and hoping like hell something might happen.

Many others have been here, yet is hard to explain. It’s a type of personal, private, running hell, and one that is never short-lived. Every step is premeditated and overanalysed. Every spare minute is spent trying to find the answers on the online. It doesn’t work. But it’s all part of the process.

Fast forward to 2013. My hips are ‘fixed’. They’re good now, no – they’re perfect. Job done. Then why can’t I run properly? The reality is, surgery is always the easy part. All I did was lie there, get knocked out, and wake up with tubes popping out of inconvenient places. My surgeon and former World Champion Mat Brick had done his job… well.

Just because your bones are ‘fixed’ doesn’t mean your muscles, nerves, or brain knows it. What a mind f**k that is! How can my brain not know that some of my body has changed? I felt like Karl Pilkington having a conversation with Ricky Gervais.

I travelled back to my surgeon and was informed that my range of motion was technically good enough to run a world record, i.e. perfect. Problem is, the muscles around my hips were not working effectively. I had this new $30,000 range of motion, and I couldn’t use it. It was like having an Aston Martin Vanquish and not being able to drive it properly. Another mind f**k.

(Crutches took some getting used to.)

Once again, a position many find themselves in. I wish I had just broken. I wish I had developed a stress fracture because of my limited range of motion. That way I might have avoided all the poor movement patterns and messed up neural pathways from three years of driving with my foot on the clutch. It’s been incredibly difficult to get through. There has been no one exercise or stretch to sort it out. I’ve had to break old patterns, and slowly build new ones. I’ve literally had to learn to walk again, to teach my brain and body to work the way it used too. It’s been the hardest kind of rehabilitation for a runner because there’s often no physical exertion. Nothing burns. You can’t do it harder to get better. It’s everything I never wanted to do.

(Cross training with a little help from my friends.)

I’ve always said that “worse things have happened to better people”, and it’s not hard to see this in the running world. Craig Mottram went from beating Kenenisa Bekele to two years in the wilderness, Chris Solinksy broke the 27:00 and 13:00 barriers then ripped his hamstring off his femur. Closer to home, Holly Van Dalen has had to watch her twin sister carry on their shared college momentum and run in the London Olympics. She’s never given up, never stopped. She struggled for two years before finding out that five minutes under the knife was all it needed. If I had surgery when my first symptoms kicked in, I would have been in the operating room in 2009, but that’s not how it works. Circumstance will never allow for hindsight.

We trust every healthcare professional we see. We put all our belief in them, its what runners do. In six years I have seen well over a dozen ‘expert’s. Two have worked, my surgeon and the physio I fly to Auckland every three weeks to see: Vaughan Craddock. He sees me at 6:30am, and then I get on a plane and fly back to Wellington and go to work. You have to find what works, and do it the best it can be done. If you want it bad enough, you won’t even think twice. That’s running. It’s either the best or the worst, but that’s why we love it.

Don’t give up, hit back as hard as you’ve been hit. Surround yourself with the right people, smart people. Seek out the best treatment specialists and no matter what the temptation, stop searching for your symptoms online. For every similarity you find, there will be six more interrelating movements or variables that you won’t comprehend. Put your focus and energy into your recovery, not your misery.

I’ve had to get to a certain point of confidence to write this, a point where I know that even though I have work to do, I can finally go out and run and feel good. The rest will take care of itself.

I’m going to race. I’ll get chewed up and spit out for a while but I’m going to do it as much as I realistically can. I’ll be scrapping it with 33min 10k guys for a while, but that’s ok – nothing worth having came easy, right? All I need to do now is lace up my Nike’s, and head out the door.

Coming back is hard, but not coming back at all is even harder.

(Finally feeling good about lacing up)

I’d like to thank my sponsor’s Nike New Zealand, Stride Distance Academy, and Wellington Scottish Athletics Club for all their support.