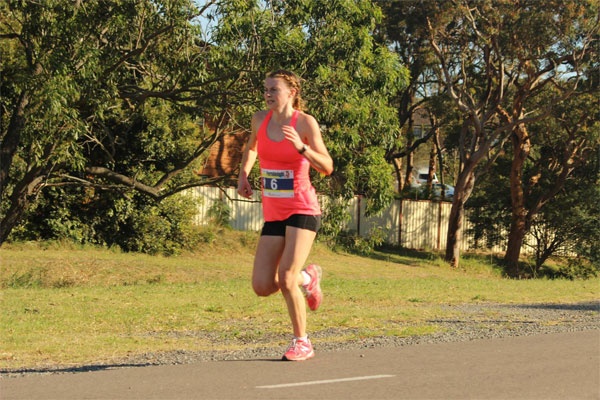 I have read that this was Pre’s response when he witnessed his high school cross country team training. And I was reminded of it on my regular Sunday long run recently when my training group pounded out the last few k’s into Merewether Beach on a sparkling but burning hot morning. As the group split to sidestep a family making their way down for a swim, a little guy (maybe 6 or 7 yrs old) loudly questioned his mum, “Why are they doing that?”
Good question.

Even more telling was the fact that none of us could come up with a decent answer. But then maybe it was just the dehydration setting in. I guess I rarely stop to think about why I do this or that in training and so the process of blogging forces me to consider the craziness and beauty of a sport that those who have not experienced it cannot understand. I hope to find some answers through sharing my experiences with all you other crazy nuts!

Celia. 19yrs. Born and bred in the Blue Mountains (NSW), now a Newcastle resident. Run XC/ 3000/ 5000 track. I often get asked when I started running. Quite honestly, I don’t remember ever NOT running, having grown up in a sporty family. What I do remember is hanging around at the local track (all 376m of it) and wishing I could join in with my dad and my brother as they trained. With my shirt tucked in and my hat and sunscreen on (thanks mum), I excitedly made my debut at Little Athletics. After a brief but promising U6 long-jumping career, I soon realised the satisfaction of beating the boys in the longer races and sort of went from there.

Probably my most exciting experience with running was a trip to Spain earlier this year for World Cross Country. I was a rookie in every way…never been overseas, never raced internationally. It was probably one of the most difficult and scary but inspiring and satisfying experiences I have had and I learnt a hell of a lot (both about myself and others) just from being with the team.

This year I have focussed a lot more on running, having not had the time to play many other sports as I did through school. I have had some big changes, moving out of home in the Mountains to a share house at Newcastle, starting first year uni (physiotherapy) and changing training groups (formerly with Graeme Heape’s squad at Glenbrook, now with Scott Westcott’s crew in Newcastle). It’s been really refreshing having a whole new training environment and meeting some great people but I do miss the mountains gang and my body has struggled a bit to adapt to everything. I’ve been frustrated by a series of niggles over the last few months but have managed to get a few good races in and am looking forward to some track PBs over summer. Fingers crossed anyway!

In the immediate future I am heading down to Zatopek in Melbourne for a last hurrah as an U20 athlete before I face the real world of Opens next year!

Catch you “crazy nuts” around the track soon!