Home Features Celia Sullohern RT Journal: I run because I can 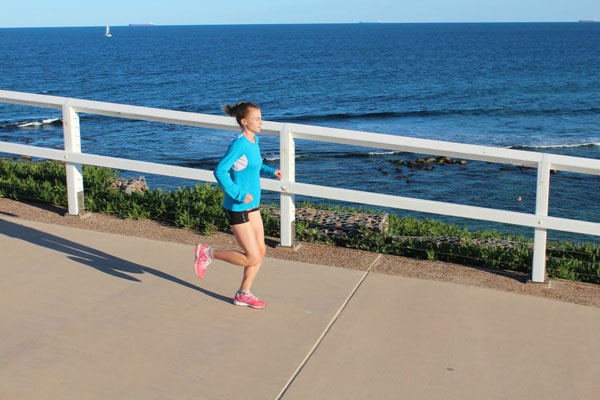 Why do you run? Some run because they want to win, others to stay healthy. Some are in
it for the social scene, or to look good, or to snatch some alone time. We hear about the
African sensations who run to get to school and the Japanese pacemakers who run to
make a living. But rarely do you hear someone say they just run.

I have just completed a 5 week block of physio placement at The Canberra Hospital. I
guess a hospital is the ultimate cliche for putting things in perspective. But every now and
then you get a case which really gets under your skin. Perhaps a patient who looks like
someone you know, or watching a family deal with shock and grief. For me, it was when I
was crouched on the floor of the rehab gym holding a catheter bag. Glamorous as always!
I was one of a team of 8 involved in what seemed like mission impossible; getting a patient
to walk who had not been out of bed for over 6 weeks.

It took 90 mins, 8 staff, 2 tanks of oxygen, an artificial airway, a mechanical lifter and
parallel bars. Who knows if this patient will ever remember how to move his feet, let alone
run again. It didn’t seem fair to go home that afternoon and lace up my runners for a jog.
Like as if it was no big deal to move like that.

I run because I can.
My dad always said that the best way to get your bearings in a new place was to run.
Whenever we went away on family holidays, dad would be up and exploring with the
sunrise. By the time we woke for breakfast, he knew the best path to the beach, or the
shortcut through the cemetery to the lighthouse. Each morning in Canberra, I picked a
direction and ran. Slowly I connected the pieces to form a map in my brain, stretching from
Canberra Hospital to Stromlo to the city centre to Red Hill and Mt Taylor.

Shortly before I arrived in Canberra, I received a lovely email from a local runner, inviting
me to join in some training. I was touched that she had gone to such effort to get in contact
with me and excited to have company training while away from my squad. The running
community is truly amazing in the way it connects individuals everywhere. I thoroughly
enjoyed meeting and training with Team Telford in Canberra. The biggest change for me
was training with a squad of girls! This dedicated bunch are all distance athletes, running
because they can! Some run to keep fit while bringing up kids, some are training for
Melbourne marathon, some are running for the social scene and the support that the
squad members provide. They made me feel normal when I bailed after 2 hrs of a long run
only to watch them disappear for another hour on the road! One salient memory which we
all joked would have to feature in my blog was Dick running along the back section of
Stromlo cross country course wielding a stick above his head so that we wouldn’t be
swooped by a particularly aggressive magpie. Pure dedication!

We run because we can.

This week’s return to Newcastle has been a shock to the system in terms of weather
conditions. Having not been game enough to venture far from my merino gloves over the
past month, the 34 degree heat was a little too much to take on the long run and I had to
bail with stomach issues. Back with my squad and keen for a good hit-out, it was
disappointing to be unable to run. “Can’t” is not a word I like to use in training! It was a
good reminder of the reasons behind such a crazy lifestyle.

So stop and consider: Why do you run?