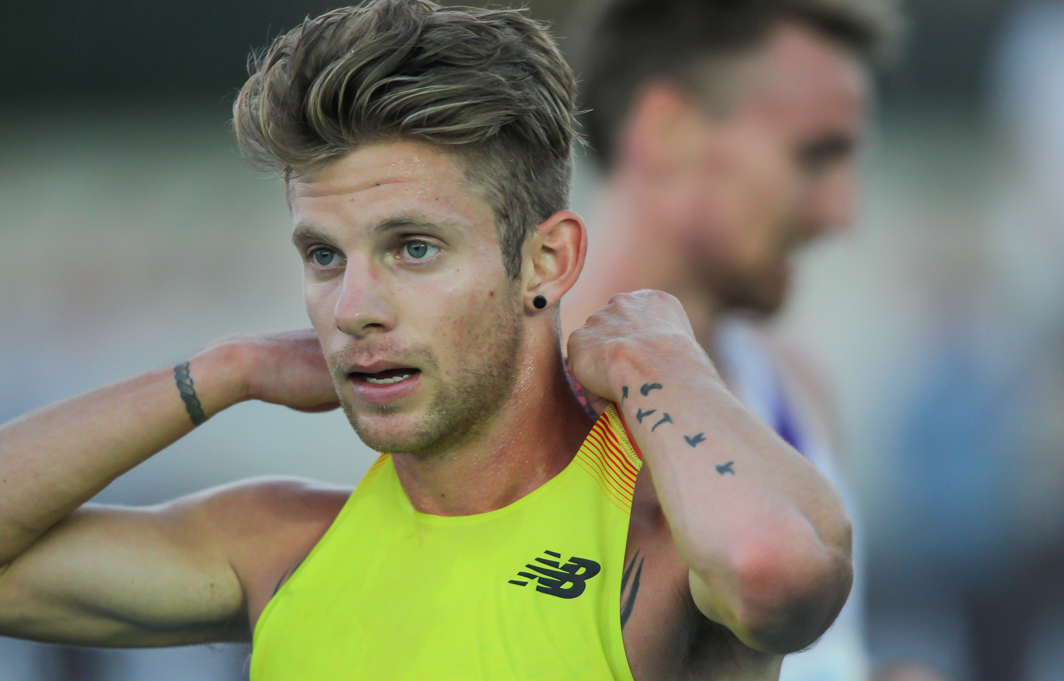 I will start off talking about the lead up to the season in which I had a lot of interruptions all throughout the winter. It all started when I begun to come back from my break after the 2009 World Cross Country Championships. I was about 2 weeks back into my training and I started to get a sore knee, I went to the physio and got diagnosed with ITB friction syndrome. I pretty much had all of April and May of training on and off, in the 8 weeks I only managed to run just over 200km. I finally got over that and got back into training in June, looking back I wasn’t too smart about it, trying to come back too fast, because I wanted to run The National Cross Country in Nowra. I ended up getting another injury, this time a slight tear in my calf, and July became just like April and May, with interrupted training for the whole month. I started back training in August and my coach Philo Saunders and I played it a lot more smarter this time, taking time to get back into training, and deciding to give National Cross a miss. It was one of the hardest things for me going to watch the race knowing that I should have been racing. But I didn’t let it get me down because I knew that the track season was more important.

I was getting through all the training well with no injures and staying healthy and even ran a PB of the 3km (8.19) with not that much training so things were going well. Then on the 1st of November my back started to hurt during my Sunday long run, when I got back to my car I could hardly walk. This injury was harder to avoid because it was caused by my bones growing too quick. I had two weeks of no running then another 2 of very few Km’s. I still decided to run Zatopek thinking I was still in alright shape, I ran 3.53 which was very disappointing but gave me good motivation to keep training for the big races in Jan-Mar 10 where my main goals were to run good PB’s over 1500m and qualify for the World Junior Championships.
Ok now I’ll stop speaking about the negatives and start speaking about the great season I did end up having. Throughout the season I spent about a month at altitude (2weeks at Perisher in November, 1 week at Falls Creek in December and another week at Perisher in February) I found this really helped me as I was getting exposed to altitude, got the opportunity to train with some of the best athletes from around Australia and I was able to focus on training and recovering for the next session. My first race after Zatopek was the Canberra Beer Mile where I ran over 21mins, I vomited about 20 times and was in so much pain.
My first real race was the Hunter Track Classic 3000m where I ran a PB of 8.13, the week after was the Graeme Briggs 1500m, I ran 3.46, even though this was a PB I was a little disappointed because I knew I could run faster. I spent the next week up at Perisher training. I came straight off the mountain to run in the Stromlo Running Festival 7.5km Handicap race. I finished 3rd and won a fair bit of money, but more importantly I only finished about 10-15 seconds behind Kevin Batt who had just run a 14.04 5000m so I knew that my fitness was going really well and I was confident that I had enough speed to run a good 1500m I just had to put it together on the day. The next week I got a start in the Sydney Track Classic, I felt like I had a lot of pressure on me going into the race because I was now ranked 4th out of the juniors that had qualifies. The race was pretty much a blur, I only remember jumping over one of the Kenyan’s that fell with 600m to go and then having a battle with my coach down the home straight, it just seemed like training. I crossed the line in 3.42, it was the happiest I had ever been after a race, I loved signing autographs after the race even though I knew that none of the kids knew who I was.
A few weeks later was the most important race of my season, the U20 Australian Championships but more importantly the Selection Trial for World Juniors. I Finished 2nd to Todd Wakefield, for days I was disappointed and thought that I should have won, but the more I thought about it I realised that on that day Todd was better than everyone else in that race and he deserved to win and I deserved to get 2nd. I still made the team and I knew that I all my hard work had been rewarded with a chance to represent Australia at the World Junior Championships in Canada.
I think that I did run well this season because after I hurt my back I just focused on getting the training done and not worrying about smashing every session but being consistent and training smart. I don’t do a massive amount of Km’s (usually around 100km a week) but I focus on doing quality sessions on the track once a week, maintaining longer threshold efforts all year round and doing good medium and long runs every week. My training also includes a lot of strength training which includes core stability, plyometrics, technique drills, weights and top speed sprints. I also train with a really good group with top athletes from 800m to the marathon, Michael Chapman has really helped me train and race well, I have trained with him pretty much since I started running and he has been a great training partner, he comes along to some of my races to keep me entertained all day so I don’t think about the race and get to nervous, he was the guy with the fog horn wearing a watermelon helmet on his head at the Sydney Track Classic.
Here is an example of an average week:
Monday -60mins + plyometrics
Tuesday- AM- 30mins
PM- Track session
Wednesday- 70mins + Gym
Thursday- Longer Reps e.g. 3x2km on grass or trails
Friday- Rest
Saturday- Fartlek or Threshold
Sunday- 85mins