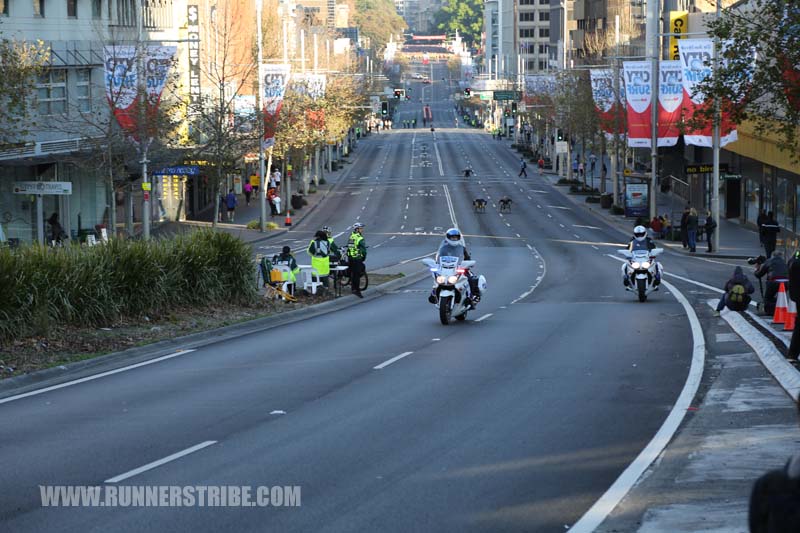 Wow, what a day! I’d never won a really big race and I think winning the City2Surf, a race with 85,000 entrants, may just about usurp my Berlin 10k win dressed as a stormtrooper. Just about. I knew I had as good a chance of winning this race as anyone but there is always a strong field as you’d expect for the biggest race in Australia! The winner for the previous 2 years, Liam Adams, was dubbed as the favourite as you’d expect but I knew he wasn’t in as good shape as he has been, and I had beaten Liam at the Gold Coast half 5 weeks ago. Also running was Steve Kelly, who beat Liam at the Victoria XC Champs; Scott Westcott who went to the London Olympics for the marathon, but I had beaten him at a XC race a week previously. A little bit of extra pressure was the fact that Amelia was excited about the prospect of business class return flights to South America which was the first prize and would have been very upset if they weren’t acquired!

The pre-race plan was to use the hills as an opportunity and surge off the top of Heartbreak Hill to get a gap if I could. I knew I didn’t want it come down to the last 1-2k if at all possible and I had to use the hills from 6-10k to my advantage to try and get a gap. Both Liam Adams and Steve Kelly have a fair bit of pace so I would have to try and get a gap before the last 2k which is mainly downhill or flat. The race started and there was the usual charge to get on TV from the masses, including the obligatory Superman and also a ‘Legend’ who got a preferred start as he had run every CitytoSurf since its inception. He spent most of the time before the gun went talking to me or the stewards, which became pretty annoying when you’re trying to focus on the race….

Once the first crazy 500m or so was out of the way, me and Liam Adams drew side by side at the front and traded the lead or ran together as we ticked off the first few ks in low 2.50s. There are a couple small rises in the first 6k but nothing too taxing, but I felt like I was slightly more comfortable than Liam. A couple of times I seemed to get a very slight gap, but Liam would close it immediately. I was never really aware of anyone else being with us. I’m not sure at which point me and Liam got away but I think it was within the first 3k or so.

At 6k we were still together and we hit ‘Heartbreak Hill’ which is a 2k continual climb. It’s not amazingly steep but it’s definitely long! Almost as soon as we started the ascent I started to get a small gap on Liam and by the top I probably had 5 seconds or so. It was a little earlier than I had intended to pull away but I still felt quite comfortable and so I pushed hard off the top of the hill to make sure Liam didn’t close the gap. What’s difficult about this course is you never know how far ahead you are, there aren’t many opportunities to take a look behind you and see what’s going on. I just had to keep the pace hard and not lose concentration. Between 8k and 12k there are a series of short uphills and each one feels much harder than the previous one. I had 2 different children sprint along next to me, which was sort of amusing but also really annoying when you’re tired! I could gauge from the crowd how big a gap I had – all the shouts were directed at me and not ‘come on guys!’ so I knew it must be a decent lead. There were also a few shouts of ‘get the course record!’ which I didn’t need to look at my watch to know wasn’t going to happen!

I hit 10k in 30.03 or so and was starting to feel the pinch now. The hills were taking their toll and I was desperate for a bit of downhill to try and regroup and recover. I just had to work hard up each one and consoled myself by thinking that Liam would be finding them equally tough. I was wishing someone would shout out how much gap I had but no-one did! I was looking at the clock on the lead car and telling myself how long of hard work was left and how worth it it would be to hurt myself for that long. Finally we hit 12k and the next 1k is a sweeping downhill to Bondi beach. I could recover a little bit and then hit the last stretch along the coast. As I reached the final k and the crowds appeared I was really hurting and then disaster almost struck. For the first time in about 20 minutes I heard someone shout for Liam just after I had passed, and then 100m further on someone said “He’s gaining!”. This put a jolt of panic through me and I forced myself to try and find another gear. I knew I only had about 3 minutes of pain left so I gave it absolutely everything and wouldn’t let myself relax at all. There was no way I was going to lead for this long and then get caught in the final stretch. I didn’t hear any other shouts and even when people started calling “You’ve got it in the bag!” I didn’t believe them! I could see the turn ahead of me with the final 300m to the finish and when I turned round to enter the final straight I glanced back to see the gap and couldn’t see Liam so that was the first point I knew I had the win. The final straight was amazing and I broke the tape in 41.47, with Liam 2nd in 42.03. Steve Kelly was 3rd in 42.49.

I was absolutely spent by the end but only had about 20 seconds to recover before being interviewed on Channel 7! I then had about 8 interviews in a row, with most questions focussing on when I became Australian or why the British were so good at sport all of a sudden!