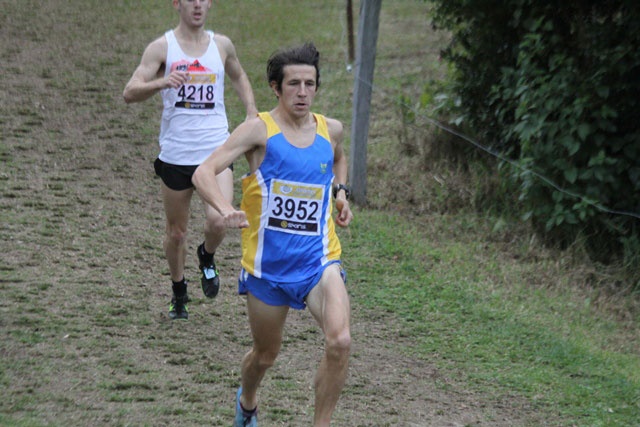 The course was in Nowra, a place 2.5 hours drive from Sydney and an extremely picturesque venue. With picturesque, hills follow and the course was 3 laps of a 4k loop that contained some extremely sharp hills and tight turns. I had never run this course before but apparently ‘the big hill’ had been removed. In its place were more short sharp hills and a quick jog of the course beforehand showed me that Coach Ken was right in saying to take it easy early on and let the course wear people down before pushing on in the 2nd half.

So I went through 4k in 12.15, with a 15 second lead. Not really the plan. But I felt so relaxed early on and found myself at the front with just James Connor (a 14.10 guy) for company. I hadn’t intentionally pushed the pace and perhaps the week of easier running as a result of a trip to Singapore for the week for work had put some extra zip in my legs. Ken had slightly panically told me to relax early on but then changed that message to tell me I was looking as smooth as he’d seen me over cross-country. At 4k I still felt relaxed and told myself not to go too hard on the 2nd lap and make sure I didn’t leave myself exposed on the final lap. As it was my lead grew to just under a minute over the next lap, even though I had slowed to a 12.39 lap.

The nature of the course is such that even when you have a healthy lead, you still doubt yourself. The sharp steep hills and crazy downhills really sap you and even though the ground was dry underfoot it’s still a really exhausting course. I felt like I was slowing a bit and was just ticking off the hills on the last lap. I also felt a very slight twinge in my hamstring, probably from the steep downhill where you just have to let your legs cycle underneath you and hope you get down in one piece. So I tried to protect that a bit and push hard on the flatter sections.

My 3rd lap was 12.49 but not one person ran the last lap anywhere near the first lap, and I was still pulling away on the last lap, winning from James Connor by 1min 14, with training partner Brad Milosevic in 3rd. Previous 3-time winner Russell Dessaix Chin was in 4th.

I was pretty pleased with the result – I’d had a busy week in Singapore for work where I had to run on a treadmill due to the level of smoke in the air (not to mention the humidity!) and I felt pretty comfortable throughout the race. It was a shame that training partner Jeremy Roff had to miss it through injury as he has been ahead of me in training recently and it would have been an epic race had he been running. In any case, I felt good and ran a strong race.