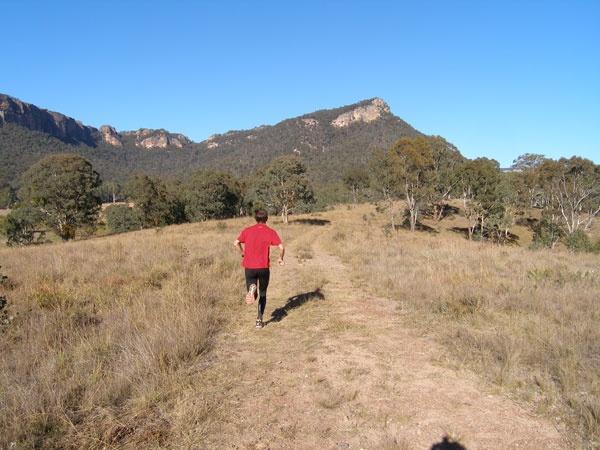 At the time of writing I’m sat at home waiting to leave for my first race since the marathon
in February. The race is a the New South Wales 4x4k XC relay and will be a good race to sharpen me up a bit and also tell me where I’m at. I feel training has gone pretty well in the past few weeks. Sessions were a bit up and down for a few weeks – I was taken apart a couple of times by James Nipperess – but they’ve become more consistent in the past 2 weeks. The past Tuesday we did 2 x 10mins hard off 5 mins steady and averaged 2.56/km on the first rep, and 2.52 on the 2nd, so I know I’m in good shape. My Sunday long runs have also felt really good. I’ve done a few runs at 2 hours to 2.15 and whether it’s the cooler weather or just general fitness, these have felt really comfortable and I’ve picked up the pace a fair bit on a couple of them and still not felt like I really wanted to stop, so this is encouraging!

Another long run highlight has to be the run I did in Wolgan valley recently. Emirates own a resort there and I took Amelia there for her birthday present (I’m good like that) and it really is a beautiful place. I did my 2 hour run on the extensive trails round there while Amelia followed on the bike. I think 50% of my run was me doubling back to collect her as she stopped for photos or to walk up some of the very steep hills but that made the time up so I can’t complain! The major highlight though was seeing a real live wombat (not roadkill) feeding outside our suite when we arrived! That’s another native Australian animal I can tick off the list. I think platypus may be the one that prevents me seeing all the ones I want to, but I’ll keep trying.

The past few weeks have also held several frustrations with British Athletics selection policies, particularly when contrasted with Australia Athletics. Australia annouced a team of 4 men for the World Champs marathon this year, while Great Britain announced zero, due to their policy of only taking potential medallists. There can be plenty of debate over whether this is a good policy or not, with my own personal view being that it’s quite an arrogant stance to take. If all nations only took potential medallists then the Championships would be recreations of Diamond Leagues and not offer what I believe they should: each nation sending their best to compete against every other nation’s best.

Another frustration was missing out on a potential vest in the European Cup 10,000m because I dind’t downlaod a pdf on the British Athletics website to see I needed to nominate myself via email. My 28.40 10,000m time from last year placed me over a minute inside the selection criteria and alongside my ‘current form’ of a marathon time of 2.16.54 this year I would have been well placed for selection, but I didn’t know about it. Again, you can debate about whether I should be more vigilant with checking these policies, but it seems silly to me that I did the hard work – 28.40 and 2.16.54 but was denied consideration due to not managing to send an email. Writing that makes me seem pretty stupid, but I generally don’t agree with any ‘nomination’ policy and have had issues with several England and South of England teams in recent years for the same reason.

Anyhow, I’ll focus on the big things – like the 4k relay this afternoon for the mighty Randwick Botany Harriers, and then some XC races amidst a couple of good road races. I’m in Tasmania next weekend also so should tick off another of Australia’s native wildlife – the Tasmanian Devil!
Ben