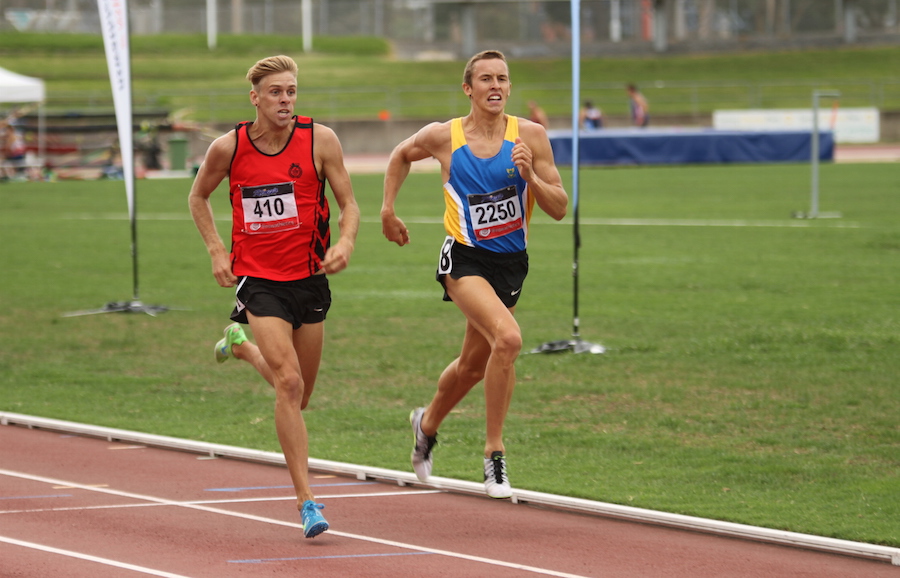 My preparation for the world juniors didn’t go as well as I’d have hoped as I got sick during the pre-departure period and had to take a week off. With that in mind, I was still searching for that pre-departure time so that I would be allowed on the plane. At the pre-departure camp held at the University of Queensland, we managed to set up a quick 800m with Kevin Batt as pacemaker. It worked out perfectly and I ended up running the time and felt great. This definitely had rebuilt my confidence and I was now on the plane to Canada.

And so the day came to leave Australia on July 8th. The flight was ridiculously long and tiring but we had our 2XU compression tights to help us get there in shape. We arrived in Vancouver early in the morning and were told to stay awake until night time to help with the jet lag. It was a massive struggle but I think everyone made it.

The next few days we competed at two different meets; the Kajaks International Track Classic and the Trevor Craven Memorial Meet. As it was my first international meet, I was pretty excited to compete and even more pumped to wear my new Asics Australian gear. Despite everyone being jet lagged, there were a few Pb’s and I managed to pull out a low 50 second 400m which is close to my personal best.

After spending a week in Vancouver resting up and training, we flew over to Moncton, New Brunswick. This is where the World Junior championships were being held and we were staying in a building in the athlete’s village located about a kilometre from the stadium. It was such an amazing experience to be in the village, knowing that everyone I saw on campus was good enough to represent their own country.

During the whole trip I had a few niggles in my lower back/glute muscle and I actually couldn’t run more than 15 minutes slowly without being in severe pain. This was definitely worrying me but the team physio’s got to work and after about a week of dry needling and pressure pointing, I felt as good as new and I was running the best I had ever run in my life. I was pulling out some awesome training sessions in Vancouver and Moncton. At this point in time my confidence was skyrocketing and I knew I was ready to run a massive PB.

And so the day came for my 800m heat. I warmed up a bit earlier than normal to leave time for the call room. Once in the call room, I was pretty nervous because I knew that everyone in that room had run similar times or faster. There was a 1.46 runner (eventual silver medallist Casimir Loxsom) and a few 1.48/1.49 runners in my heat. I knew what I had to do and that was to make the race fast, otherwise I’d just get kicked down in the home straight.

Stepping onto the track was the greatest feeling. As I did my stride on the track I could hear the Aussie crowd cheering for me ‘AUSSIE AUSSIE AUSSIE, OI OI OI’, after hearing that I lost all nerves and was just really happy to be there and was ready to have some fun.

The race worked out perfectly, I got a sit in 3rd place and stayed there. With about 250m to go, I moved up a bit pushing for second. It was then when another runner made his move and the 4 of us were battling to make the semi. I went into the call room ranked I think 7th in my heat and I came out with 4th place, a new PB of 1.50.00 and a qualifier for the semi finals, so I was stoked. After the race, I had people coming up and asking for my autograph which was really unexpected, but it just made the experience even better.

The next day was the semi final. Only 2 runners make it through to the final from there so I knew I would have to drop another PB if I was going to make it through. I didn’t run as well as I had hoped; but It’s hard to back up the day after running a PB. My official time in the semi was 1.52.25 and I came in 7th.

Overall, World Juniors was an experience that I will never forget; it was definitely the best time of my life. I made loads of new friends from all over the world and I even managed to learn some Italian whilst being over there. I couldn’t have gotten there without my family, my coach Bill Francis and Nicky Frey, who coached me over there, team physiotherapists Ben Liddy and Merryn Aldridge and Dr Dan Bates.

Now that WJ is over, I’m having a few weeks off and cannot wait to get back into some long base work.