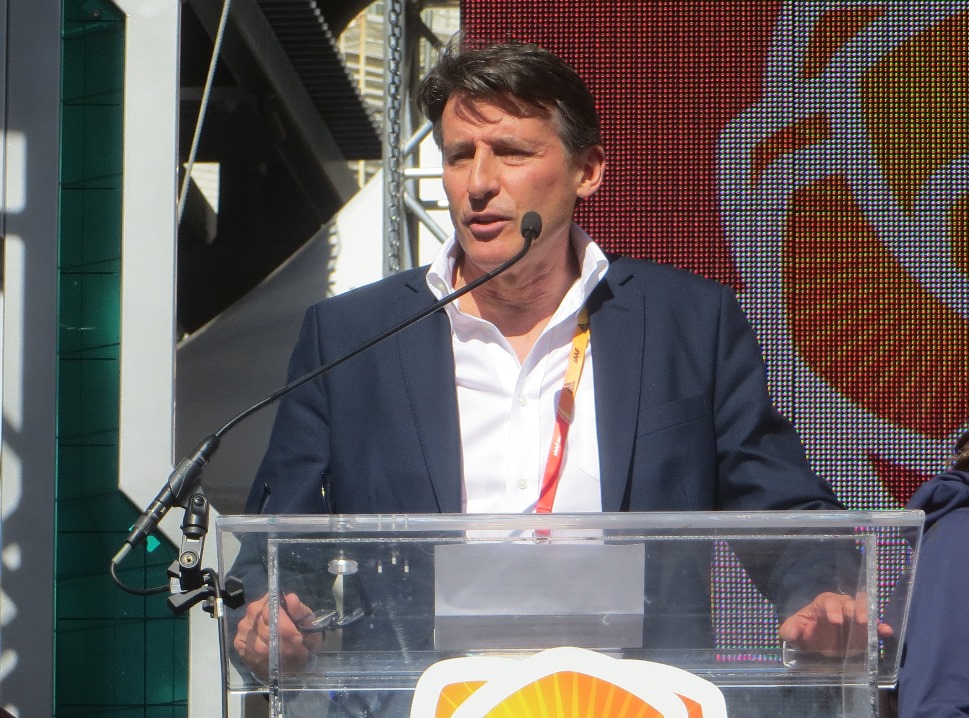 PORTLAND, ORE. (17-Mar) — Some seven hours before the 16th edition of the IAAF World Indoor Championships get underway here, the mood was an interesting mixture of optimism and defense at the event’s kickoff festivities in downtown Portland. With the sun shining down on Pioneer Courthouse Square, IAAF President Sebastian Coe, USA Track & Field CEO Max Siegel, and TrackTown USA President Vin Lananna were all smiles. Flanked by Olympic medalists Ashton Eaton and Brianne Theisen Eaton, Coe spoke of the sport’s future as bright and uplifting.

“The United States, given its great economic power, is still a country where the general perception of track and field is low. It is great that that regeneration should be taking place here in the state of Oregon and in this city of Portland,” said Coe in his opening remarks, looking out over the assembled media and fans. “I genuinely believe this will be the re-awakening of track and field in this country. The World Indoor Athletics Championships, the World Junior Championships two years ago, and of course segwaying nicely into the World Outdoor Championships in Eugene in 2021.”

Touching upon ways the sport is great right now, Coe rattled off reasons why athletics –and these Championships in particular– is in a fantastic position to succeed. From the world-class athletes competing on home soil (including Oregon native Eaton), to the nearly capacity crowds expected at the Oregon Convention Center, Coe’s outlook was rosie red. For the press conference’s opening 45 minutes, he’d address all things from social media engagement to broadening the sports reach through Caribbean and Oceanic markets, all with a euphoric spirit of optimism.

Yet there was a lurking issue just waiting to be addressed on stage: the corrosion of global athletics by persistent doping.

As the clock struck 1:00 p.m., the mood shifted abruptly as the giant elephant in the room appeared. Asked about the state of the sport as it relates to doping, and the seemingly never ending conundrum of negative headlines that athletics has faced in recent months, Coe’s tone changed slightly from cheerfulness to defense.

Appearing confident, Coe did his best to reiterate and assure all in attendance that the International Association of Athletics Federations is doing as much as it possibly can to ensure clean competition going forward. Trust, Coe said, was the organization’s main priority at the moment.

“The situation I think is pretty clear cut,” Coe began, starting off by addressing Russia’s absence from these Championships. “We’ve got a task force that is looking to set the criteria for the re-introduction of Russian athletes, the clean athletes back into international competition…”

Yet it was the next question, posed by highly regarded reporter Alan Abrahamson, that seemed to drill down on the current state of the sport.

“Our sport is still strong. That is not to deny that it has been through some really challenging dark days. I don’t think you’d be surprised if I concluded anything other than that. But the ticket sales here have been very, very strong, our indoor programs during the winter months have been extremely strong, the crowds have been loyal and supportive of the sport,” Coe said. “The sport is strong but we are in a process of change and we have to make those changes. We have to make them, and my responsibility is in two key areas really, but it coalesces around the word trust. We’ve got to make sure the people really trust the federation and also that the clean athletes trust the systems they are in wherever they reside to make sure that we create opportunities for them that are fair and protective. That is the simple responsibility that I have, the whole of my counsel has, and there is a real appetite, I think there is a real appetite, in the sport for change and for grasping the situation. These are big challenging days but the sport is still a strong sport. We have other things that we have to deal with and that is clear.”

After the formal portion of the press conference concluded, Coe met the press in a mixed zone area where he was pressed for more specifics and answers. Not only on doping, but about Russia, meldonium, and the Olympics in Rio de Janeiro.

Repeatedly, he reiterated the main speaking points: that these Championships are an important “staging post” for an Olympic year and an important part in the ‘road to recovery’ as a whole.

“I think the changes that we are making and the changes that will be in place by the end of this year will self evidently answer and deal with any of those challenges that we’ve got. But we aren’t going to return to that overnight. It’s not a straightforward equation — you don’t stick ten dollars in a slot machine and suddenly trust emerging in the trade. This will take a long time. The clean athletes have got a big responsibility here as well. There are no unique issues there — you can’t just sit there saying, ‘Well it’s down to one person, down to one counsel, down to one element of the sport.’ Everybody has to make that journey together.”

Moving down the line of media, this reporter asked Coe directly how long a time period fans and those within the athletics industry can expect true change and full trust again. For years, the sport has faced issues on clean sport, and there’s never been a concrete or transparent timeline of change. The clean sport issue has extended from decade to decade.

“I don’t know. You know, we could have this debate here for a couple of hours,” Coe said in a defiant tone, addressing Race Results Weekly directly with unwavering eye contact. “The one thing I do know is that we have to start by making those changes. They aren’t the most exciting things to read about, but they are — it’s the only place to start. We can’t demand trust. It’s not going to just return because people suddenly think we’ve got reforms in place. But we do have to go through that process. I don’t know the answer to your question. All I do know is that unless we start from where we are at the moment, um, it’s unlikely to happen.”

In a sense, these championships are a ground zero, according to Coe, the first step in a process that will –in some amount of time– produce a cleaner and more pure sport. Asked about the spectators and whether they will witness clean sport here, Coe believed so.

“I think the very fact they are coming in tells me that there’s a strong loyalty to our sport. But it’s our responsibility to make sure that it’s not just the fans, it’s the athletes, the media, our partners that we are looking to invest in the sport, it’s parents who we want to encourage their kids into the sport. That trust is across a wide bandwidth.”

The next four days, when Olympic medalists, world champions, and the next generation of stars take to the emerald green oval here, there will be a focus on the competition on the track and in the field. For four days, hopefully the only athletics headlines in the news are about fast times and photo-finishes, legendary performances and gold medals.

In a city known for its consistent rainfall, Coe assures sunny skies are ahead for track and field.  Time will indeed tell. The stopwatch has started.