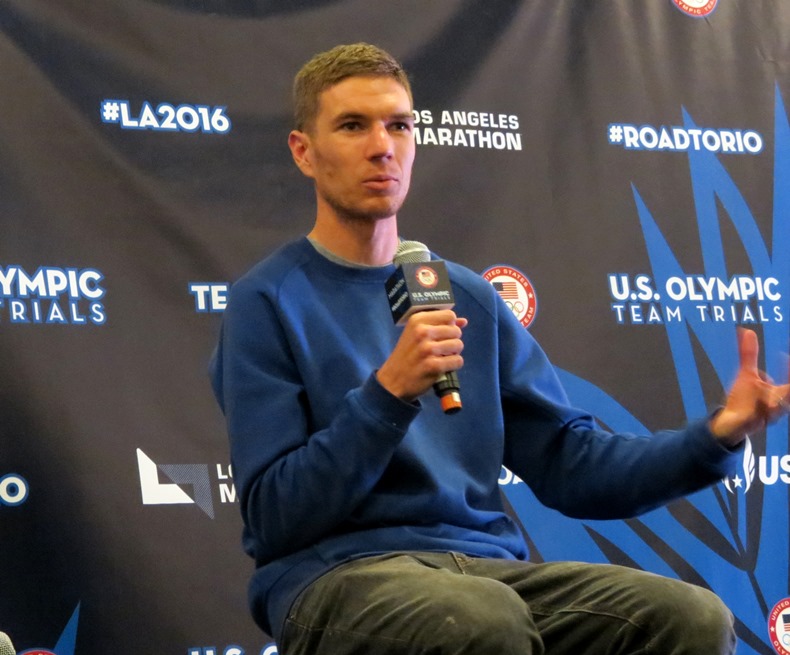 LOS ANGELES (11-Feb) — With each step taken here at the USA Olympic Trials Marathon on Saturday, Luke Puskedra will feel a sense of accomplishment. Just a few short years ago, the tall 26-year-old contemplated giving up competitive running altogether, gaining 20 pounds while pondering whether the sport was truly for him. After shining in high school and collegiate competition, Puskedra abruptly hit a wall in the professional ranks.

That was then, and this is now. Fresh off a 2:10:24 performance last October at the Bank of America Chicago Marathon, Puskedra finds himself entering the Trials as a top contender, mentioned alongside names like Meb Keflezighi and Dathan Ritzenhein.

Puskedra’s journey has been widely chronicled, especially his resurgence leading to the jaw-dropping surprise in Chicago. In his debut at the 2014 TCS New York City Marathon, Puskedra limped to a 2:28:54, 36th place finish. Positive-splitting by more than eleven minutes (1:08:44/1:20:10), Puskedra was admittedly crushed by the marathon.

Speaking candidly here, the University of Oregon alum now reflects on the experience –and his time with the Nike Oregon Project under coach Alberto Salazar– as a learning opportunity, one that has helped him both on and off the race course. Now a father and husband, Puskedra views running in a very different light than he did two years ago.

“It’s exciting. I think I’m just in a different place,” said Puskedra, dressed casually in a Nike top and white sneakers. “With the training and stuff, I’m confident in what I’ve done.”

In years past –especially leading into the 2014 TCS New York City Marathon– Puskedra was ruled by the watch. If he didn’t hit certain splits on the track, Puskedra would push harder and harder trying to make up time and fitness. Under Salazar, Puskedra went to the well each and every workout. Ultimately, the tendency to push to the limit spiraled into a tendency for sub-par performances, culminating in New York City.

“I’d loose sleep over [workouts] and you’d take the days beforehand easy because you’re worried about it,” Puskedra said, elaborating that he’d put so much internal pressure on himself that it was hard to perform. “The mentality is just with the workouts, a lot of time I’m going into these workouts, like if I have 8 by mile or 12 by K, you’re worried that I need to hit this time to get into this kind of shape, if I don’t hit this time then I’m not going to be in this kind of shape.”

After returning to his collegiate coach Andy Powell, Puskedra took a refreshing look at training and worked to regain his confidence. Focusing less on the splits and more on effort, he slowly but surely returned to form. When Puskedra etched out a months-long training schedule, Powell slimmed it down significantly. The message was clear — don’t overwork yourself.

“Now when I go to the track I handle what I need to handle. If I start a little bit slower then I make the adjustment to run a bit faster at the end,” he said. From his tone, Puskedra seems at ease with running now. It no longer is a burden that keeps building; rather, it is a means for which he can succeed and make his family proud.

Seven months ago, Puskedra and wife Trudie became parents for this first time, having a baby girl named Penelope. Wanting to help provide for his family, Puskedra has approached training with a more professional mentality. Yet he has made sure to put performances into perspective, and not let workouts get him down.

“I wake up in the morning, play with my daughter, hang out with my wife, and I go and train. When I’m at the track, it’s three or four hours of hard stuff, and making sure I’m doing everything I need to do while being professional about it,” he said.

“It’s great to have them. This will be the first meet my daughter’s able to be at. I don’t know if she’ll be able to remember. But training’s been good and pretty relaxed,” he said.

Between his family support system and Powell’s guidance, Puskedra has become one to watch in Saturday’s race. Thriving on pure championship style races (where there are no pace setters, and even more importantly no clocks dictating tempo), Puskedra feels at ease.

Four years ago, Puskedra was on the sidelines as Meb Keflezighi, Ryan Hall, and Abdi Abdirahman ran their way onto the Olympic Team at the U.S. Olympic Marathon Trials in Houston. A day later, the 21-year-old Puskedra debuted at the half-marathon with a 1:01:36, “pressure-free” race,as he described it.

“I never thought I’d be competing with those guys in four years. I didn’t see myself moving up to the marathon that soon,” he said.

Yet here he is, ready to take a stab at the podium and book a trip to Rio de Janeiro and the 2016 Olympic Marathon.

“I think it’s about the type of fitness you’ve got yourself into, and how well you’re prepared to finish at the end because it is a championship style race,” he said. “You have to be ready for everything. With that being said, I think it’s definitely going to take a 2:08 effort to win.”

PHOTO: Luke Puskedra speaks to the media in advance of the 2016 USA Olympic Trials Marathon (photo by Jane Monti for Race Results Weekly)