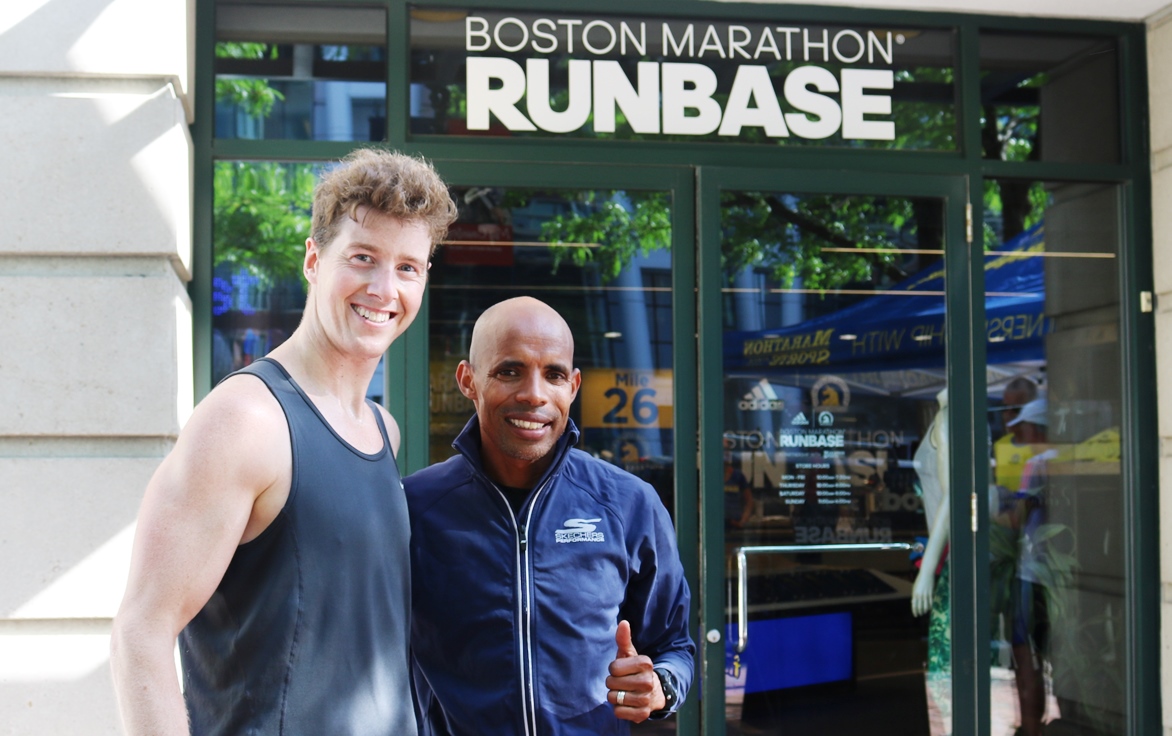 BOSTON (2-June) — Steps from where he achieved perhaps his greatest career accomplishment in winning the 2014 Boston Marathon, Meb Keflezighi paused for a moment here on Global Running Day yesterday. In town to speak at an American College of Sports Medicine conference, Keflezighi thought it would be fitting to join those who supported him most for a morning run along the Charles River, starting and finishing at Boston Marathon adidas RunBase on Boylston Street, steps from the marathon’s finish line.

To Keflezighi, there wouldn’t be any other place in the world that could match the memories and enthusiasm of the streets –and paths– of Boston on Global Running Day. Thousands took to routes along the Charles River Esplanade throughout the day, running from dawn to dusk.

“Most definitely, this was the most memorable victory ever in my career. To be here on Global Running Day and run with people — it’s always amazing. I love seeing people exercise especially with running,” Keflezighi told Race Results Weekly, moments after completing eleven miles at roughly a 6:35 per mile (4:05/km) clip. “To come here and have people to run with, it was so nice… It was a great day out there. A great kickoff to Global Running Day.”

As chance had it, Keflezighi stopped in Boston on his way home from Eritrea, where he had been for nine days. Invited to celebrate the nation’s 25th anniversary of independence, Keflezighi got to visit many family members and the nation’s leaders back in his native country. Training at altitude while there, he saw elites Zersenay Tadese, Yonas Kifle, and Ghirmay Ghebreslassie.

But on Global Running Day, Keflezighi made sure to record some miles with Bostonians. Joining members of the Boston Athletic Association staff, B.A.A. High Performance coach Terrence Mahon, and other local runners, Keflezighi hit the roads with a pep in his step (despite it being only 7:00 a.m. and coming off of harsh jet lag).

Always one to promote physical fitness and the benefits of running, Keflezighi said it made him smile knowing so many people were getting active on this world-wide holiday. As of this writing, 2,498,978 people had pledged to run on GlobalRunningDay.org, covering 177 countries. At Boston Marathon adidas RunBase, three runs were scheduled throughout the day to promote the sport.

“People were honking, people were saying ‘Go Meb!’ It’s humbling just to be here,” said Keflezighi, before noting a special story that hit close to his heart.

Jeremy Steeves, an exercise science professor from Maryville College in Tennessee who was in town for the College of Sports Medicine Conference bumped into Keflezighi in a hotel elevator late Tuesday night. A runner himself, Steeves asked if there was any way he could complete a couple miles with Meb over the next few days. He even said he’d be willing to get up anytime –as early as 4:30 a.m.— to run together.

Both Keflezighi and Steeves took to the streets of Boston together with Mahon for 11 miles, personifying what Global Running Day is all about: bringing people together from all walks of life through the sport, while promoting physical fitness and well-being at the same time.

“To have people exercising, to have people moving, I just love to get a sweat personally. That, for me, sweating is a good thing for me, whether your running eleven miles or one mile. I got to do that and it’s just very fun to be here in Boston for this special day,” said Keflezighi. “To see old friends like Terrence and Jen [Rhines, a three-time Olympian] and Tom [Grilk, Executive Director of the B.A.A.] and you, and new friends like Jeremy, it’s very special.”

Along the Charles River, one by one runners recognized they were in the midst of a Boston Marathon –and TCS New York City Marathon– champion. Some circled back and joined the growing group, while others simply did a double take and continued on. One man sprinted to join the pack.

“I always run alone at this time, and didn’t want to miss a chance to run near Meb,” he said mid-stride.

Gradually cranking up the pace, Keflezighi and Mahon seemed to rule the soft surface paths along Boston’s most iconic river. In the early miles, conversations drifted from the 2016 U.S. Olympic Trials in Los Angeles (“It was HOT, but Rio won’t be nearly that bad.”) to the Kenyan and Ethiopian Olympic Marathon teams selection (“I’ll be studying their teams closely”); then to family, friends, and the last Olympiad in London. Keflezighi chuckled when this writer recalled him saying in the mixed zone that the 2012 Olympic Marathon would be his last, plain and simple. “It’s funny how things happen and change. It’s very fulfilling,” said Keflezighi.

But towards the middle miles, conversation faded and the group behind Mahon and Keflezighi simply ran in silence. Taking in the moment, runners from across the nation — from Tennessee to Wisconsin and beyond– enjoyed running in the wake of an American icon. Not only did Meb win the 2014 Boston Marathon; he helped heal a state and country a year after the tragic acts on Patriots’ Day, and even further has motivated generations of runners to get the best out of themselves.

Upon his return to RunBase, Keflezighi observed the numerous exhibits of memorabilia, including one that featured an autographed shirt and medal from his 2014 run. After a quick stretch and cool-down, when nearly all the morning’s runners had gone their separate ways, Keflezighi paused to chat with staff and fans.

Even at 41, Keflezighi enjoys lacing up his shoes and getting out the door each and every day. When he can share the joy of running with others, it makes him realize how unique our sport really is. Running helped create countless opportunities and friendships for Keflezighi over the years, and he hopes that all runners can experience the same benefits as he has since taking up the sport as a child.

While he said training for Rio de Janeiro is going well and there’s a lot of work still to be done, the 2004 Olympic silver medalist was quick to savor the moment back here in Boston.

“To be on Hereford and Boylston Street, a magic moment of my career,” he began before a long pause, looking out to where the 26 mile mark would stand on Marathon Monday. “You know, I was here to be a runner. That was a solidification, that was one of the reasons I was here, to be a runner. That’s one of the reasons why I am on this earth — to run. To be on Boylston and Hereford again, it’s pretty amazing. It’s very hard to put into words.”